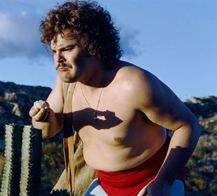 Heck, I'm already salivating for one fall film (Brian De Palma's The Black Dahlia, with Josh Hartnett) and one Christmas movie (Bill Condon's Dreamgirls), which is either remarkably forward-looking of me or pathetic, depending on how much leeway you want to give me. In either case, summer is here with the third Mission: Impossible, the first salvo in what's expected to be a record-busting May.

All of which makes it a good, not-at-all-pathetic time to start thinking about the movies I ˆ and all you other moviegoers ˆ are looking forward to in the next four months.

It‚s not quite fair to say I‚m anticipating Prairie Home, since I‚ve seen it and I already know it‚s good. On the other hand, if I hadn‚t seen it, I‚d be in can‚t-wait territory, and I am really looking forward to seeing it again.

The second time, I won‚t have to worry about the negligible plot and can concentrate on the glorious music and the superhuman way Meryl Streep turns the cartoony part of a ditzy singer into something noble, melancholy and hopeful.

There are a few reasons an upcoming movie gets my attention: a terrific director, an actor with interesting taste, a story that sounds intriguing or a perfect storm that whips up all those elements. That‚s the case here.

I loved Jared Hess‚ Napoleon Dynamite, and the role of a priest who becomes a wrestler sounds perfect for Jack Black‚s manic talents. The plot ˆ the priest takes to the mat to save some orphans ˆ has a sweetly doofy ring to it, which I‚m hoping means Hess‚ Nacho dips into Naploeon territory again.

Someday, the folks at Pixar will make a dud. But, at this point, their track record is so glittering I find myself having to tamp down expectations before I see a Pixar movie (I recently rewatched my least favorite, A Bug‚s Life, and even it‚s pretty dang good).

The trailer for Cars, which has to do with vehicular friendships during the planning of a big race, is underwhelming. But it showcases affecting voice work from Owen Wilson and, especially, Paul Newman. Plus, a little birdie who has seen Cars tells me it‚s another winner.

I don‚t know a lot about Harsh Times, and I plan to keep it that way. It‚s directed by David Ayer, who wrote the smart Dark Blue, and it stars Christian Bale, who seems to be attracted to intelligent, disturbing material (If you missed him in The Machinist, I encourage you to finish reading this story while walking to the video store.).

Like Dark Blue, in which Kurt Russell was a dirty cop, it‚s a drama about crime coming between friends.

Lots of folks were disappointed by M. Night Shyamalan‚s last movie, The Village. Not me (and not just because I finally know how to spell his name without Googling).

Yeah, its secret was guessable, but, even if you did guess it, The Village was still the work of a craftsman who keeps finding ways to play with audience expectations. So I‚m thrilled Shyamalan is back with this „bedtime story‰ about a mermaid, especially since Paul Giamatti plays the guy who discovers her.

Somewhere, some graduate student is probably laboring on a thesis about why words make such fine source material for documentaries. Meanwhile, we just keep getting to enjoy such movies as Spellbound (spelling bees), Word Wars (Scrabble championships) and this portrait of the guy who makes the New York Times crossword puzzles. I don‚t even do crossword puzzles, but I‚m already hooked.

What can I say? When it‚s summer, I want to see things blow up spectacularly. And, although I love The Poseidon Adventure, it‚s no classic, so I‚m willing to believe it can be done better. Heck, if one or two of the characters don‚t sound like an ignoramus every time they open their mouth, that‚ll be an improvement.

And the line Kurt Russell says in the trailer ˆ „There‚s nothing fair about who lives or dies‰ ˆ how mouthwatering is that? (By the way, anyone wanna lay odds he‚s one of the characters treated unfairly?)

There are reasons to worry: How long can Vince Vaughn coast on his wiseguy act? Can Jennifer Aniston be funny outside „Friends‰? Why is it that real-life lovers often don‚t spark opposite each other on the big screen?

But it has Judy Davis in it, for crying out loud, a woman who could make sleeping neurotic and hilarious. And Jason Bateman and Jon Favreau and Vincent D‚Onofrio, all of whom are very funny men if they‚re given good material.

We can put money down that it‚ll be the most original-looking film of the summer, since it‚s made with the same wiggle-mation technique director Richard Linklater used for Waking Life: He shoots the film normally, then animators outline it and color it in.

Linklater (Before Sunset, School of Rock) is one of our most consistent filmmakers, and I‚m anxious to see if Miss Named-After-a-Minnesota-Town, Winona Ryder, can still act. Especially when she has to act with Keanu Reeves.

Could the next few months bring two great 9/11 movies? The riveting United 93 ought to have put to rest the „Is it too soon?‰ talk, and Oliver Stone seems like the right guy to tell the story of the two heroic policeman (played by Nicolas Cage and Michael Pena, from Crash) who were the last survivors plucked from the wreckage of the World Trade Center.

Stone, by the way, has made a promise: No hare-brained conspiracy theories.

Supposedly, it‚s the new most expensive movie ever made (Titanic was the old one). Whether or not that‚s true, the wall-to-wall marketing for it will own your month of June. You‚ll see the ads while you grocery shop, while you pee and while you channel surf, all leading up to a pre-July 4 opening on the choicest date of the summer. The box-office lines may not be able to leap tall buildings, but they‚ll be wrapped around them.

I wouldn‚t predict this one as confidently if I hadn‚t already seen it and didn‚t know that it‚s a bright, witty comedy with great characters (who just happen to be animals). With fine voice work from Garry Shandling, Steve Carell and Nick Nolte, this is an animated movie that‚s equally diggable for adults and kids.

I‚ve seen it, and I can report that: Tom Cruise doesn‚t act mental, the supporting cast (Michelle Monaghan, Ving Rhames, Laurence Fishburne, Billy Crudup) has more to do than they did last time, it moves like crazy and the climax ˆ a breakneck sequence set high atop Shanghai ˆ is likely to set the bar for this summer‚s action scenes.

So far, the X-Men movies have been a story of unrealized potential, mostly because there are too many characters floating around for us to latch onto anyone. New director Brett Ratner promises Halle Berry actually has something to do this time, but, otherwise, there‚s no reason to think they‚ll change the formula, since the first two films were both x-tremely successful.

You gotta figure everyone who read the book and liked it will go. And everyone who read it and didn‚t like it will go (to see if director Ron Howard and the splashy cast, led by Tom Hanks, make it sing). That‚s already more than $200 million at the box office, since the book has 40 million copies in print, worldwide.

If even a few of the people who didn‚t read it opt to see what the fuss is about, the Vatican (which officially hates the dogma-challenging book) is going to have a lot of damage control to do.

I don‚t quite get the appeal of the first Pirates: Liked it, didn‚t love it. So I may be underestimating the appeal of this one, which is going for the action-loving crowd in a trailer that barely mentions Keira Knightley and also skimps on Johnny Depp‚s drunk act.