A ‘Spa’ talk on being Korean and gay: Director Andrew Ahn pushes back on Asian American stereotypes 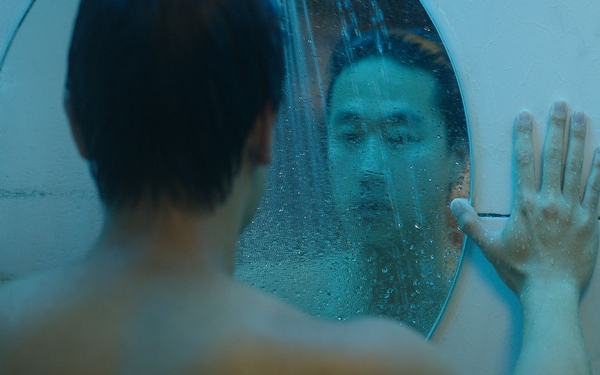 Joe Seo as David in a scene of the movie "Spa Night" directed by Andrew Ahn. (Strand Releasing/TNS)

When Andrew Ahn came out as gay, he was told by his Korean father that gay Koreans didn’t exist, that being gay was an American concept and he was gay only because he was Korean American. That statement left Ahn feeling “fractured, like your Korean identity and your gay identity can’t live in the same place,” he said.

But with his first feature film, “Spa Night,” he’s rejecting that notion head-on.

“In many ways, what I was trying to do with ‘Spa Night’ is to create something that felt both queer and Korean at the same time,” he said. “To create a culture that was really about this intersection.”

“Spa Night” follows the coming of age of David, a first-generation Korean American attempting to live out his parents’ dreams of him attending USC — if he can get those SAT scores up. When his parents are forced to close their restaurant because of low business, he picks up a part-time job at a spa in Koreatown. While working there, he discovers the not-so-secret world of hookups happening in the saunas of the men’s-only establishment, and he eventually has one of his own.

Ahn, 30, who wrote and directed the film, came to the idea for the script a few years ago when a friend told him about a “hot hookup with a guy at a spa.” His first thought: “sacrilegious,” he said, because spas are a traditional, almost sacred place in Korean culture. Ahn remembers going to the spa with his dad near the end of every year to cleanse their minds, bodies and spirits before the new year, a ritualistic family bonding event.

“It was so tied into my sense of my Korean identity; to find out it was being used for gay cruising, it came as a complete surprise,” he said. “And in some way maybe it shouldn’t have because I know anywhere you have naked men there’s going to be some sort of homoerotic tension.”

The spa, Ahn said, always forced him to confront his Korean-ness, “because I’m naked, and it’s me and my Korean body.” In that space, he never felt American, rather “super Korean.” But as he was developing the character of David, played by Joe Seo, he realized that the spa was “forcing this character to be both (Korean and gay) in a way he’s uncomfortable being,” he said.

“That process is trying to find an authentic life: How do you live as a whole human as opposed to (having) those two parts sectioned off?”

But considering the taboo nature of LGBT identity in some Asian communities, Ahn ran into issues casting his movie, which features an entirely Asian cast and is mostly in Korean with English subtitles. (A number of Koreatown spas also refused to be used as shooting locations after hearing the film’s plot.)

He admits he was “scared” that Seo wouldn’t take the part. Another actor who had auditioned was told by his mother that if he took the part, she would send him back to Korea to live and “hide out there because the Korean American community would be so (angry) with him.” Additionally, a woman who auditioned for the role of the mother said that she couldn’t do the movie because her husband, a pastor, wouldn’t approve.

Seo however did take the part, with little hesitation — but he did ask his parents and pastor.

“They said, ‘If you think you can do it, go for it,’” Seo said. (He was recognized with the coveted breakthrough and outstanding performance awards at Sundance and Outfest, respectively, this year.)

Seo was also interested in the role in hopes that “Spa Night” will start and continue a positive conversation in Asian communities about embracing lesbian, gay, bisexual and transgender folk.

“It’s time to discuss this, and I think it’s important for (LGBT Asians) to watch a movie like this because they might feel alone, or might not have that courage to come out,” he said. “All we want to do is give people that push, that encouragement, and tell them you are human, you are loved. (The Asian community) needs to express love to all kinds of people, not just those you think are ‘normal’ or righteous.”

Ahn plans to continue creating work with queer Koreans at the center, not only because the LGBT film genre is largely void of people of color. To put a spin on the title of a popular book addressing the invisibility of black women, “All the Women Are White, All the Blacks Are Men … ,” in film, all the gays are white, all the men are straight.

“The next step is to talk about intersectionality because it’s not just enough anymore to talk about being gay,” he said. “It’s about talking about how that intersects with our race, class, religion. There’s so many of these additional identities that color how we’re queer. The queer genre has to grow, and it is.”

As for other places of growth in the industry, Ahn and Seo look forward to conversations about whitewashing Asian roles and stories — like Scarlett Johansson playing Motoko Kusanagi in 2017’s “Ghost in the Shell” — and the lack of diversity in Hollywood ending, as focus shifts to highlighting the diverse work that is being done.

“I really hope that we can stop talking about Matt Damon and ‘The Great Wall’ and talk about Joe Seo and ‘Spa Night,’ Ahn said. “I hope this movie is part of a wave that shows we can make films that have an entirely person-of-color cast and it can do well in theaters and people can connect to it, even if they’re not Korean or queer.”

And while most mainstream Asian American film and television is comedy, like “Fresh Off the Boat,” “Dr. Ken” or last year’s “Ktown Cowboys,” “Spa Night” is “pushing back on this model minority myth,” Ahn said.

“I wanted to show that Asian American content can be dramatic too,” he said. “There just has to be more.”