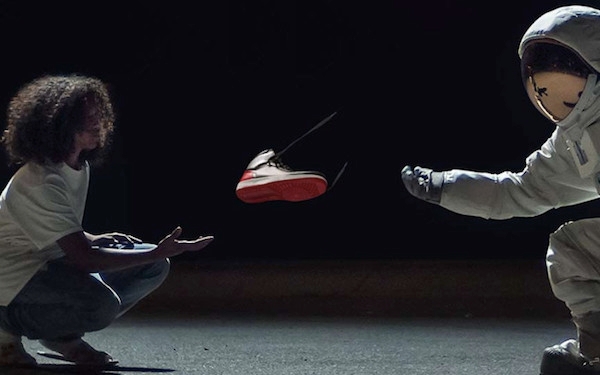 In Oakland, California, it’s not the car you drive or the house you live in that defines a man; it’s the shoes on his feet, and these shoes are what set him apart from the rest of the guys in the city claiming to be someone of worth, of power. For his debut feature, director Justin Tipping uses Kicks as a way to illustrate what that hunt for power means to kids in the inner-city, where what they’re sporting on their feet really reflects to those sizing them up. To outsiders, looking for the perfect sneaker may seem like a trivial search, but as Tipping shows his viewers, it is a search that surprises, haunts, and oozes with ideals of magic and tragedy.

Having grown up in the unpredictable grit of the East Bay, Kicks is loosely based on Tipping’s own experience taking immense pride in the shoes he wore and eventually had stolen from him. At the time, that moment of physical and emotional humiliation was framed in his mind as an induction into manhood because it meant he faced violence and didn't run from it. Looking back, however, Tipping sees a sort of ridiculousness and even tragedy in the way he and so many others approach this idea of acquired "masculinity". Kicks is his way of fleshing that idea out, sometimes with a harsh stroke that may bring some viewers crashing down, but luckily for us, he also gifts us buoyancy and flight, for escape is always on the other side of the fence if one simply jumps high enough.

So, we follow Brandon (Jahking Guillory), a fifteen-year-old in the Bay who’s grabbed the short end of the puberty stick. He’s a small kid, who has more hair volume than body mass, has little game when it comes to the opposite sex, and his peers as well as his two best friends Albert (CJ Wallace) and Rico (Christopher Meyer) are always sure to remind him of his shortcomings. All of that changes, however, when he scores a pair of rare Air Jordans that instantly boost his confidence when walking down his city’s streets. What he doesn’t know, is that those sneakers also make him an easy target for anyone bigger and badder who might want to cash in on the cool of the kicks. Unfortunately for Brandon, the biggest baddy of the them all, a hood kid named Flaco, is the one to snatch them, leaving Brandon’s ego and body bloodied and bruised. Taking this hit as the final straw, Brandon convinces his reluctant friends to retrieve the shoes at whatever cost, channeling violence for violence in a neighborhood where the cycle is already infectious.

Coming off the resounding success of his 2011 short Nani, Tipping has a keen understanding for the stories of urban woe and how that can be framed in a unique, yet realistic way. Kicks is reflective of that particular aesthetic result, which is both reeling with hardship as well as the freedom lies beyond it.

The soundtrack for instance, is packed with hip-hop classics, mostly from artists born and bred in the Bay Area, but Tipping doesn’t just lay them on top of images in stylish ways. Okay, yes, he does do that, and sometimes with an overly stylized manner when slow motion is added—but he also categorizes it into chapters of Brandon’s search for these sneakers. The stages of music traipsing along with our flawed protagonist shows us how both these musicians and this kid have been influenced by this very unique environment where poverty, pride, and opportunity bleed into one another.

That constant flux between ego and mindfulness becomes Brandon’s biggest challenge, and in Tipping’s script the character becomes a non-hero, often soiling his own, as well as his friends’, best qualities for his own selfish reasons, creating tense and frustrating obstacles that seem to steamroll once he takes the first step in the wrong direction. Luckily, Guillory and the rest of his supporting cast offer illustrative yet grounded performances to keep the frustration as a driving force rather than a deterrent.

What seems to be most impactful is Tipping’s sense of framing and color. Working with cinematographer Michael Ragen (Faults), Kicks reeks of the otherworld, that place that we each dream of as the ideal place to be, wherever we are not. For Brandon, it’s that sense of untouchableness, of being out of reach from the people that have suggested reign over him, that allows him to keep trudging forward.

Tipping then places an astronaut in Brandon’s world, or rather in his head, as the embodiment of escape, and with the tools of magical realism, Kicks transcends the typical structure of an inner-city crime tale. It may over-indulge in both its languid and hard-hitting moments, but still, it explores the wonders beyond Brandon’s and our imagination via the footsteps of a community always on the search for something better.