Kylie Bunbury in the big leagues with ‘Pitch’ 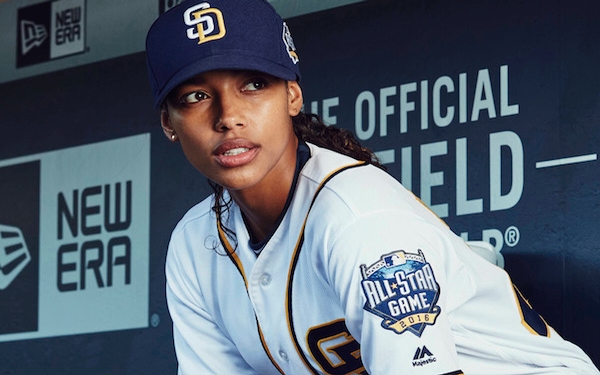 In a fall lineup in which Kiefer Sutherland gets thrust into the Oval Office, a history professor guarantees tenure by hurtling back in time and Matt LeBlanc attempts to befriend his kids, “Pitch” is raising the most eyebrows.

In the Fox series, which tested so well with advertisers that the network moved up its premiere by several months, a young pitcher named Ginny Baker defies the odds by becoming the first woman to start in baseball’s major leagues. That the show’s prospects rest largely on the shoulders of actress Kylie Bunbury, a newcomer who grew up in Minnesota, may be the season’s most unlikely — and captivating — story line.

“In real life, she’s not quite a modern-day Jackie Robinson who becomes the most famous woman in America, but it’s in the ballpark,” said co-creator Rick Singer, who cast the actress following an exhaustive three-month search.

The moment Bunbury walked in for her audition, Singer and his producing partner Dan Fogelman sensed they had found their ace.

“She reminded me of Muhammad Ali, the way she carried herself, more like an athlete than an actress,” Singer said. “After reading just two lines, Dan and I knew. Jackpot.”

Burbury is the daughter of Alex Bunbury, a member of the Canadian Soccer Hall of Fame, and big sis to Major League Soccer player Teal Bunbury, a forward for the New England Revolution.

“Because our father played professional soccer, being in the spotlight never felt weird to me and my brother,” said Bunbury, 27, speaking by phone last month during a break from shooting the third episode. “We always felt we could do anything.”

From an early age, Bunbury was looking to score, if not on the field, then on the stage.

“Ever since she was a baby, she was Miss Drama Queen,” said her mother, Kristi Novak Bunbury, who fondly recalls her oldest child singing along to Beyoncé and Mary J. Blige by the time she was in fourth grade. “She always wanted to be on camera. We’d have to tell her to give other people a chance.”

Bunbury’s drive led to a modeling career, but she transitioned into acting in her early 20s and quickly landed roles in ABC Family’s “Twisted” and the Spike TV miniseries “Tut.”

“Pitch,” however, is a whole new ballgame.

Bunbury appears in nearly every scene, holding her own with TV veterans Dan Lauria (“The Wonder Years”), who plays the San Diego Padres’ sympathetic manager, and Mark-Paul Gosselaar, a “Saved By the Bell” graduate now grizzled enough to play the team’s veteran catcher.

Bunbury, who had never played baseball as a youth, engrossed herself in the sport during a 10-week training period, watching a lot of MLB Network, working out with former ace Gregg Olson and taking up boxing to strengthen her throwing arm.

There are days on the schedule when she has to hurl 40 pitches from the mound, a strain for even professional players.

“I’ve literally put my blood, sweat and tears into this,” she said.

Her character makes up for her slight build by relying on an old-school screwball. Bunbury uses a different secret weapon: home.

“It’s incredibly important to my spirits and mental health that I come back to Minnesota and not be surrounded constantly with Hollywood life,” said Bunbury, who plans to return at least once during the holiday season. “Spending time in the backyard, helping out in the garden, going out to the lakes, reminds me of what’s important and allows me to realign myself.” While she wasn’t able to make it back for her beloved State Fair, her mom made sure to bring along some sweet corn when she visited the L.A. set three weeks ago.

Bunbury may need grounding more than most.

In addition to being the star of a hotly anticipated network show, she must be braced to deal with the attention that accompanies being one of the few minority leads on TV. White males star in all six of CBS’ new series.

Bunbury is mixed-race (her father is Guyanese, her mother has Polish and Swedish roots), but she’s well aware she’ll be identified primarily as an African-American in the press. That’s fine — to a point.

“I guess I should be prepared to be more knowledgeable on this subject, but I don’t really like the word ‘identity,’” she said. “I love that I have all these different cultures inside of me. I mean, aren’t we all mixed? I want to feel like I’m beautiful because I’m me. On the other hand, I understand this platform and the role-model aspect that comes with it. I just want people to remember I’m not perfect. I just try to lead with love every day.”

Bunbury’s determined mug is already being splashed across billboards in major markets and commercials for the drama will be in heavy rotation during Fox’s coverage of the MLB playoffs.

So what about throwing out the first pitch at one of those high-profile games?

“Don’t even say that. No one wants to see a 50 Cent pitch ever again,” referencing the rapper’s ill-fated attempt to clear the plate before a 2014 Mets-Pirates game. “I know how to throw a ball, but it’s a mental thing. Thanks for making me nervous!”