Oliver Stone, in his own blunt words 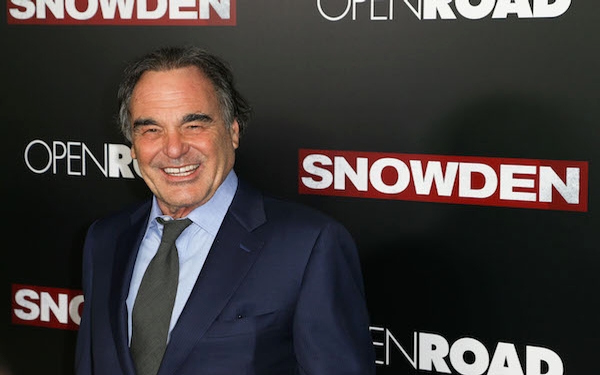 As a writer and director, Oliver Stone has never shied away from the big subjects. War. Political corruption. Greed and criminality. The hidden conspiracies they don’t teach you about in history class.

For four decades, in movies like “Platoon,” “Wall Street,” “JFK” and his latest film, “Snowden” — a hot-button thriller about former National Security Agency contractor Edward Snowden (Joseph Gordon-Levitt) — Stone’s gaze as a filmmaker has been relentlessly turned outward. But as intensely engaged as he is with the world around him, Stone is also prone to looking at himself and his own work.

“I’m not one of those people who doesn’t reflect,” the filmmaker, who just turned 70, said on a recent afternoon in Los Angeles. “I recently read a profile of a director — I won’t say who but a man who’s done a lot of good work — and he professed he was just unanalytical of his work, which surprised me. I think it’s interesting to go back and probe. My life in movies is the growth of my consciousness. Every year was an expansion in some way.”

One of Hollywood’s most consistent lightning rods for controversy, Stone, who has won two Oscars for directing, has been celebrated as a fearless cinematic truth-teller and castigated as a reckless provocateur — sometimes for the same film. He has never been one to soft-pedal his views, no matter how incendiary or contentious; he recently said in a CNN interview that the hacking of the Democratic National Committee that U.S. officials and security experts say might have involved Russia? was “probably an inside job.”

Over a long discussion with The Times, Stone looked back with unflinching candor on the highs and lows of his career.

After serving in Vietnam, for which he was awarded the Bronze Star and the Purple Heart, Stone studied film at New York University and set out to make his mark as a cinematic storyteller. But even though he made a splash with his Oscar-winning screenplay for 1978’s “Midnight Express,” he was still struggling to establish himself as a director when he made this psychological horror film about a comic book artist (Michael Caine) whose accidentally severed hand goes on a killing rampage.

“It was my chance to direct. Horror films were a way many young directors thought they could make an impression. It was a psychological thriller but I got a lot of pressure to make it into a horror film. That’s the nature of the business, and when you’re a young man, you sometimes bow to that pressure.

“The movie is interesting to watch. It’s about paranoia, which we know is abundant in the modern world. But it was not a hit. The attacks were pretty heavy. My career was blighted at that point. It was another setback. I was hurt. But I learned.”

Stone poured his personal experience as an infantryman in Vietnam into this harrowing war movie about a young soldier (Charlie Sheen) whose idealism is stripped away by the horrors of combat. Released just months after his political thriller “Salvador,” “Platoon” was a box office smash and earned seven Oscar nominations, winning the best picture and director prizes.

“I had been trying to make that movie since 1976. No one wanted to make it. I had given up. My heart had been broken so many times by people who gave me hope. I’d had a catharsis writing it but by the time the movie got made, I was just exhausted. I was tired of talking about it.

“I was worried that (the Vietnam war movie) was over. They’d done ‘Apocalypse Now’ and ‘The Deer Hunter’ and now it was about Rambo and Chuck Norris. But all of a sudden it came back.

“The movie got hot right away and it was not containable. When you have that spontaneous reaction around the world, it’s a golden moment for any filmmaker and it changes your life.”

As cutthroat corporate raider Gordon Gekko, Michael Douglas delivered one of the most memorable movie monologues of the 1980s, crystallizing the Reagan-era zeitgeist with the line, “Greed, for lack of a better word, is good.”

“My father had been on Wall Street in the ‘30s, and he believed very much in the loyalty between stockbroker and client. At some point that whole game changed. Gekko was an interloper in that world. He didn’t give a … about having clients. He was doing his own thing with his own money. He was a new kind of deal in the ‘80s. This was another kind of aggression.”

“That script was almost financed in 1978 or 1979, and Al Pacino was going to play the part. We were two to three weeks away and it fell apart. It was heartbreaking. But I brought some of that knowledge with me 10 years later.

“‘Top Gun’ was a good movie to watch but it had a horrible message. I felt that. There were doubts. Kovic is a strong pacifist. But when Kovic met Tom, he saw that he had that same earnestness that Ron has, and it felt right.

“Tom committed totally to the film and he was exhausted by the time we finished. He dedicated himself beyond belief. He works himself almost to the point where he hurts himself. He cares too much.”

A dramatization of the events leading up to — and the alleged cover-up of — the assassination of President Kennedy, Stone’s film sparked a firestorm of controversy, with many saying it played too fast and loose with historical facts. Though it earned eight Oscar nominations and was a box office success, “JFK” also set Stone’s reputation in some people’s minds as a cinematic bomb-thrower and a purveyor of conspiracy theories.

“I saw it as a political thriller. I wasn’t preaching a message. I had believed the Warren Commission for all those years until I started to get into the investigation, which brought me into another world.

“I was naive. I thought the movie would be appreciated as an alternative point of view to the orthodoxy, like all of my films had been. But in this case, I touched the third rail. I went out there for six months defending this thing. I’m not the kind of filmmaker who’s going to say, ‘It’s only a movie.’ I hate when people say that. It’s such a cop out.

“It was certainly a great experience. So many people come up to me and say, ‘ “JFK” opened my eyes not only to the story but to the way film can be used.’ But, of course, that was the end of my period where I could at least get films made without all these accusations and misunderstandings … .

“Having been victimized by the description ‘conspiracy theorist’ so many times, I can tell you it’s a ridiculous accusation. Because we see the evidence of conspiracies all the time. Look at the news. Look at what’s going on. The U.S. government has been lying for years, and if you believe them, you’re a fool. And unfortunately, the lies get bigger.”

Stone again courted controversy with this blood-soaked, ultra-stylized satire of the media’s obsession with sensationalistic violence.

“That hurt. Warner Bros. never really supported the film. When I showed it to them, I had never seen such shock on the faces of the execs. It was like, ‘How are we going to release this movie?’ I think they never got their hands around it.

“That was a depressing time for me because the attacks were mean-spirited. It’s a unique picture, I think. It’s not normal. It’s a sensory overload. It was going back to my ‘Scarface’ days (Stone had written the screenplay for Brian De Palma’s 1983 crime epic). It was, ‘OK, let’s ramp up the coarseness and the vitality.’ It’s a love story wrapped in a horror film.”

Stone’s nonlinear take on the life of President Nixon earned generally strong reviews and four Oscar nominations. But the film was spurned at the box office, where it grossed less than $14 million.

“Nixon is not a Kennedy figure. He was a paranoid, sweaty man. It was a lot of ugly suits and bad haircuts — and a lot of talk. But on the other hand, I had to do it. Nixon was my dad’s generation. I felt I knew him in a way.

“I think it was my most mature movie. But it didn’t make money. The poster was horrible. We had this grim picture of Anthony Hopkins. Jesus Christ, who’s going to see that?”

Stone’s hyperkinetic, full-contact look at the NFL, featuring a hip-hop-heavy soundtrack and Pacino as a grizzled coach, sharply divided critics but proved a success at the box office, earning $100 million worldwide.

“Critics didn’t get it. They don’t like sports films in general and this was sweaty, heavy and macho to them. But, to me, it was much more.

Stone rounded out his presidential trilogy with this take on the life of George W. Bush (Josh Brolin). Given Stone’s outspoken political views, some found the film surprisingly sympathetic to the 43rd president.

“This wasn’t ‘Nixon.’ It’s a two-dimensional man, and I knew that. This was light comic opera more than a tragedy.

“I consider myself a dramatist, not a political filmmaker, whatever they say. Yeah, I have a citizen side but when you make the movie, you wear a dramatist hat and you’re not taking sides. You don’t (mess) with a person’s life … . You may not agree with it but that’s your own business.”

Stone’s sequel to “Wall Street” initially featured a cameo from real estate mogul and future Republican presidential candidate Donald Trump. But the scene, which was set in a barbershop, ended up on the cutting-room floor.

“It was an interesting scene, but it felt too flat for that late in the movie. Of course, now I wish I’d left it in. Working with him was a trip because he is Donald Trump. There’s a certain appetite to the man.

“He wanted to do it in one take and he thought it was great. He never lost his confidence. I must have done several takes with him making slight adjustments, trying to get him to improve. He’d jump up and say, ‘Wasn’t that great?’ He is who he is and he’s not going to change.”

The story of the former NSA contractor who leaked classified information about the government’s spying program seemed tailor-made for a longtime provocateur like Stone. But despite that — or perhaps because of it — he was initially reluctant to sign on.

“I’ve been burned. It was a hot potato and you don’t want to get involved in hot potatoes because they change all the time. There’s new news, there’s all kinds of scandal, somebody comes out of the woodwork, you have lawsuits. As a citizen, I care — sure, I care. It’s big. But I was in no mood for this.

“The script was torture. (Co-writer Kieran Fitzgerald and I) ended up going over it and over it — it was coming out of our ears. It was everything horrible: Jargon. No car chases. No violence. Snowden doesn’t look like an active man and is more of an introvert. I wanted to make a political thriller. I loved ‘Enemy of the State’ and ‘War Games’ and the ‘Bourne’ series. This was not that, but we wanted to make it like that.

“Some people will not follow it. Some Americans don’t even know who Snowden is and don’t give a … . But a lot is at stake. So you trust the faces. You trust the story.