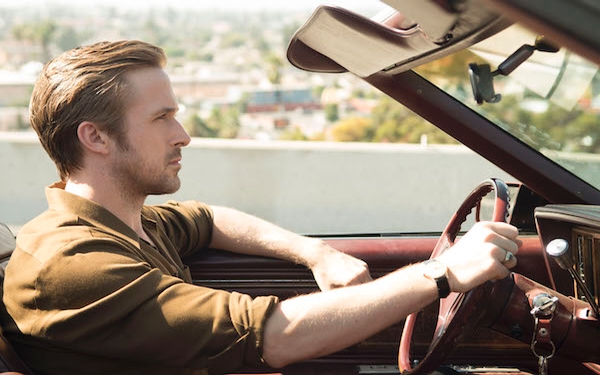 “You’re my first, so I apologize if I’m a little rusty.”

Ryan Gosling — he of the “ludicrous good looks” (Danny Leigh, The Guardian) and bona-fide movie-star resume including, once upon a showbiz childhood, “The All New Mickey Mouse Club” — is making a cup of tea and readying himself for a string of interviews at a downtown Toronto hotel, in support of his new film, “La La Land.”

It’s a musical, if you hadn’t heard, and it’s really something. Writer-director Damien Chazelle’s third feature, following “Guy and Madeline on a Park Bench” (same excellent composer, Justin Hurwitz) and “Whiplash” (also featuring Hurwitz’s compositions and arrangements), appears to be a likely story in the larger story of the imminent awards season.

Heavily indebted in style and tone to Jacques Demy’s beguiling “Umbrellas of Cherbourg” and “The Young Girls of Rochefort,” dotted with visual allusions to Hollywood musicals ranging from “The Big Broadcast of 1940” to “Singin’ in the Rain” and “The Band Wagon,” “La La Land” enjoyed a gaga reception in its Aug. 31 Venice Film Festival world premiere. A couple of days later: a similarly warm response at the Telluride Film Festival for its unofficial North American premiere.

At Venice, Emma Stone won the best actress award for her role in the film, and she’s a pretty good bet for an Oscar, I’d say. She plays Mia, a barista and aspiring actress. She meets jazz pianist and aspiring club owner Sebastian, played by Gosling, a “pigheaded, stubborn guy,” in the words of writer-director Chazelle. Is it a love meant to be?

Gosling had to skip the Venice world premiere; he was filming the “Blade Runner” reboot in Hungary. But he’s Canadian by birth, so his presence in Toronto will be much appreciated by Canadians, for starters.

He met Chazelle, he tells me, over dinner “at a restaurant near my house. I really liked ‘Whiplash’ and I wanted to meet him. And he started talking about this musical.” Miles Teller, the star of “Whiplash,” was initially penciled for the leading male role in “La La Land,” but Chazelle, as they say, went a different, Gosling-er direction.

“Damien,” says the 35-year-old actor, “just has this infectious love of movies, and also of the experience of going to the movies. That night at dinner, he talked a lot about wanting to make a film you didn’t want to see on your iPhone, something you wanted to take the time for, to go out, to a theater, to see. With people.” Festival screenings aren’t always reliable barometers, but at the Venice premiere the crowd burst into applause at the conclusion of the opening number, a traffic jam ensemble showcase titled “Another Day of Sun.”

Gosling says the project was intimidating without being entirely foreign to his performance history. “I danced a little as a kid, here in Canada, in Ottawa at the Elite Dance Studio, and at the Top Hat Dance School in Cornwall, where I grew up. So I had some experience of having to learn routines. But that was a long time ago. And ‘90s hip-hop,” he says, smiling, “is a long way from what I had to do here.” He credits choreographer Mandy Moore with having “a lot of patience.”

Gosling’s uncle was an Elvis impersonator, and Gosling appeared in his act. “My father put on talent shows. So I’ve been around it, a lot of my life. But the stakes were much higher on this, partly because of the way Damien shot it, with the dance sequences done in long takes, or I should say many takes, but one shot.” The first major duet for Gosling and Stone, photographed during the so-called sunset “magic hour” on a real street in the Hollywood Hills, is photographed to look like MGM studio lighting, but paradoxically on location. Gosling, Stone and company did seven takes of the complete number, dialogue, song and dance, across two evenings.

The look and feel of “La La Land,” Gosling says, is “heightened romanticism and kitchen-sink drama, both. The movie straddles both worlds.” A key scene, in which Sebastian surprises Mia with a homemade meal after a long time apart, turns into an arresting and painful breaking point. The dialogue was largely improvised, Gosling says.

His defiantly analog character, he says, “may be cynical but the film itself is anything but. It’s unapologetic.”

The inspired climax of “La La Land” refers directly to extended dance sequences such as the “Broadway Ballet” in “Singin’ in the Rain,” or the ambitious ballet at the close of Gosling’s own favorite musical.

“I love ‘An American in Paris,’” he says. “That’s the one for me. Some of the visual ideas in that film are just haunting, and very free. It’s interesting the kind of freedom the musical form gives you. The rules are out the window. You can get impressionistic without seeming pretentious. Because it’s perceived as an inherently accessible form, it gives filmmakers some leeway.”

Oh, one thing about “Singin’ in the Rain,” Gosling says, before we part ways.

“We had the great opportunity to meet Gene Kelly’s widow before we filmed. We had dinner at her house, and got to see a lot of Gene’s personal things, including leather-bound copies of all his scripts. He made notes in all of them, and in the ‘Singin’ in the Rain’ script (written by Betty Comden and Adolph Green), he’d written some ideas for the title sequence, the ‘Singin’ in the Rain’ dance. One of them said: ‘Hand umbrella to a passerby when the number’s over.’ “

Gosling grins. “As grand and as legendary as that number is,” he says, “it’s sort of amazing to remember (the details) sometimes come down to one guy making notes in a script.”