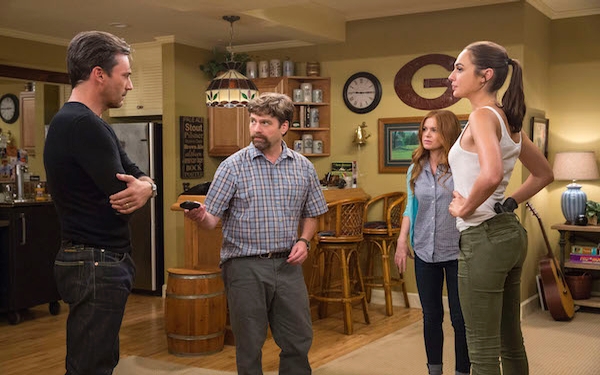 If you made a Venn diagram of “Mad Men” and “The Hangover,” it’s safe to say you wouldn’t expect much overlap (well, except for maybe the booze). But the fact is, Jon Hamm and Zach Galifianakis have known each other for nearly two decades, since well before either of them hit on the roles that made them famous.

Now, in one of this fall’s unlikeliest comic pairings, the two are costarring in “Keeping Up With the Joneses,” in theaters Oct. 21. In director Greg Mottola’s action-comedy, a strait-laced suburban couple (Galifianakis and Isla Fisher) suspect that their glamorous new next-door neighbors (Hamm and Gal Gadot) may be spies.

On a recent afternoon in Santa Monica, Hamm and Galifianakis showed off the easy rapport and back-and-forth razzing of friends as they talked comedy, typecasting and trying to steer away from the middle of the road.

You guys go way back. When and where did you first meet?

Hamm: It’s been a while. I think it was in the late ‘90s at some point, most likely at (L.A. music-and-comedy club) Largo or at somebody’s house.

Galifianakis: I had so many foggy days in the late ‘90s.

Hamm: We all did. But I do remember seeing Zach for the first time at Largo. It was a great era back then for a comedy fan. You’d go on Monday nights and for 5 bucks it was a murderer’s row of people who are now wildly successful but who were then just starting out: Zach, Sarah Silverman, Paul F. Tompkins, Patton Oswalt, Maria Bamford, Doug Benson. You hang around long enough and you meet people.

Galifianakis: I will say this: Some of us comedians would admit that we only like to talk to other comedians — and maybe even don’t like to talk to actors. Jon is not of that ilk to me. He’s a great actor, but he speaks like a comedian. He certainly doesn’t speak like an actor. He’s really funny, and he has a comedian’s mind.

That to me is the attraction: He is a comedian just as much as my comic friends are. (To Hamm) That’s what you texted me, right?

Jon, in 2008, you were one of the first guests on Zach’s Funny or Die talk show “Between Two Ferns.” What was that like?

Hamm: It was a very weird choice to have me come on that show. I think the only people who’d been on before me were Jimmy Kimmel and Michael Cera. At that point, “Mad Men” was not widely known at all.

We shot 90 minutes of footage to get three minutes of material in a garage in Hollywood. It was amazing. It made people not only look at “Mad Men” a little differently but also look at me a little differently. I think from that came the opportunity to host “Saturday Night Live” and do “30 Rock” and all that stuff.

Galifianakis: So you’re basically saying that I launched your comedy career. Because I haven’t gotten a formal thank-you.

Hamm: The last thing I wanted to do was just be the guy who’s totally exasperated by Zach’s character. It’s boring, and what it really does is highlight the fact that you don’t necessarily have a character. What I think we both went into the movie hoping for was to just take it out of the middle of the road, to jerk it toward the curb a little bit every now and again. Whether it was a joke or casting or pausing a scene to take in what’s actually happening because it’s so weird, throughout the process we were working with Greg and the writers and producers to say, “Maybe there’s a different way to get from A to B.”

Galifianakis: Look, I’ve played obnoxious a lot, and there’s not a lot for Jon to do if I’m just obnoxious. I think what’s helpful is to try to find this other layer of people relating instead of just jokes back and forth.

Comedians paint ourselves into corners all the time, and tastes in comedy change. The guy in “The Hangover” was a really fun character to do, and it was easy to do. But you have to find other things because audiences will let you do that for a little bit and then they’re like, “What else do you have for us, monkey?”

Jon, have you experienced that same kind of typecasting coming off “Mad Men”?

Hamm: Sure. It’s a tricky thing to navigate. You understand there’s a reason this thing hit for you and you want to understand that and know that that’s a big part of your appeal. But you also want to do other things you can have fun doing and be challenged with. I mean, every script I got after “Mad Men,” it was a thing set in the ‘60s and I was chasing a skirt and smoking cigarettes. And I was like, “That’s my day job. Why would I want to do that on my days off?” You have to push back against it a little bit.

Galifianakis: I went and spoke to an acting class and one of the young students was like, “What would you consider your brand?” My brand? (pauses) My brand is the same as Mike Pence’s. I would say that months ago and no one knew what I was talking about. Now they get it.

Does it feel like there’s more creative freedom to try different things in TV these days than movies?

Hamm: The market has spoken in the feature film world. It has gotten so ridiculously polarized to where the movies available are either giant $300 million special-effects tentpole productions or, at the other extreme, tiny, little independent films that have a hard time even getting seen.

So when something like, in Zach’s case, “Birdman” comes out, which is a modestly budgeted story about people that’s very creatively told, it kind of wakes people up. You go, “Oh, right, there’s a middle path too.”

Galifianakis: The movie business seems to have been taken over by hedge-fund type guys. In TV, I don’t think it’s there yet. That doesn’t mean it won’t come, but TV is now the more creative path.

Jon, if you stripped away the comedy, your character in this movie could basically be the hero of a big action-franchise-type movie. Would that kind of thing appeal to you?

Hamm: Sure, some part of that is appealing. I don’t think the idea of a franchise is 100 percent a bad thing — there are good ones out there. And action movies are fun. The stuff we got to do — driving around, motorcycles, jumps — it’s exhilarating. But I’m also 45 years old. The window of being an action star — it gets harder to do all that stuff. I look at what Matt Damon and Tom Cruise and Will Smith and those guys do, and it’s like, jeez.

Galifianakis: Yeah, I have the same trainer as those guys. The stories that we trade … .

Hamm: You can tell. It’s really working out for you.

So I’m guessing if the right project came along, you guys would jump at the chance to work together again.

Galifianakis: I don’t even know what chemistry is, but when you can already have that back and forth with someone you’re working with, it’s helpful. Jon and I are lucky people that we even get to talk like this. So yeah, it would be nice to work together again. I’d like to do something more serious. Something really dramatic where both of us just cry for two hours. Or something about two guys playing chess.