Teen author heals self through travel 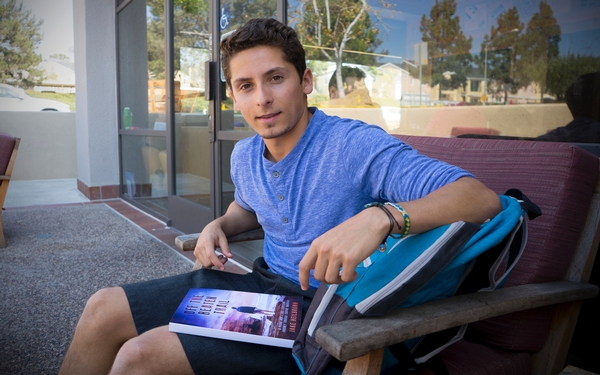 Like most Torrey Pines High alumni, Jake Heilbrunn worked for years toward the end result of getting into a good college. But in the Carmel Valley teen’s case, that end was just the beginning of the hardest year of his life.

During his first semester at Ohio State in 2014, Heilbrunn battled crippling anxiety, depression, a lack of self-confidence and a chronic case of stress-related hives. But rather than continue pushing through the pain, he chose a different path — he dropped out of school and bought a one-way ticket to Central America with little more than a backpack, a soccer ball and a few words of Spanish. During four months of self-discovery, the 19-year-old said he recovered his emotional, spiritual and physical health.

Now he’s sharing his experience with other students struggling under the pressure of high expectations through his autobiography “Off the Beaten Trail: A Young Man’s Soul-Searching Journey Through Central America.” The self-published 298-page book, which will be available Sept. 28 on Amazon.com, has already attracted one major endorsement. Chris Guillebeau, author of the New York Times best-seller “The Happiness of Pursuit,” reviewed the manuscript and called it a “brave, beautiful book.”

“Most of us experience periods of doubt and discontent at some point in our lives, and the way we respond to those seasons can chart the course for the rest of our lives. Jake made a bold choice to question everything,” Guillebeau wrote in the book’s back cover blurb.

“Off the Beaten Trail” is a brutally raw memoir. Heilbrunn spares little detail in describing his mental meltdowns in college, his oozing skin rashes, a crying jag in front of total strangers and a cringe-worthy bout with Montezuma’s revenge near a Mayan pyramid. He didn’t sugar-coat his story because he thought other young people in distress might feel less alone if they recognized their own suffering in his words.

“By being honest it allowed me to have a say in the conversation,” he said. “I’d never read a book that dove that deep into what the doubts feel like. I heard once that if you can’t find the book that tells you what you need to know, then maybe you need to write it yourself.”

Heilbrunn grew up in San Diego with a life of relative privilege. He played competitive soccer for 14 years and his family enjoyed traveling, including a soccer trip to England in his youth. His older sister excelled in math and was excited to attend UC Santa Barbara for an accounting degree. But as Heilbrunn started the college applications process in his late teens, he felt increasingly lost.

He secretly dreamed of taking a gap year to travel the world and find his passion, but surrounded by peer pressure at school, he went instead to Ohio State to study business. Just three days after he arrived on campus in August 2014, he was already breaking out in stress-related rashes. He tried pills, creams and a gluten-free diet, but the problems only grew. Surrounded by friendly, upbeat students, he became depressed and felt miserable, isolated and like a fraud.

Winter break at home went well enough that he decided to give college another try in the spring. But on his very first day back — coincidentally the jubilant day that Ohio State won the 2015 College Football Playoff National Championship — he knew he’d made a mistake in returning and drank himself into a stupor. The next morning he visited a school counselor to discuss dropping out. She asked him two questions: What’s the worst thing that can happen as a result of this decision … and then, what’s the best? Feeling he had little to lose, and hopefully health and happiness to gain, he withdrew and flew home four days later.

“I felt like I was a failure, this big loser,” he said. “I thought I was the only one going through this and I came to find there were lots of other kids dealing with the same thing. It was the white elephant in the room nobody talked about.”

To regain his equilibrium, he decided to travel. He chose Central America because he wanted to volunteer in an underdeveloped country, he wanted to learn Spanish and he thought his soccer skills could be put to good use. After two months of planning, he flew to Guatemala and made his way to a remote jungle school where he taught English and soccer and spent his free time exploring the jungles, lakes and Mayan ruins. Later he would travel to Nicaragua and Costa Rica.

There were ups and downs, extreme physical tests and thought-provoking experiences with the people he met along the way. There was also a mind-expanding spiritual experience where he learned to visualize the things he wanted from life while meditating in the lost Mayan city of El Mirador.

“There was hardly anyone there and we were surrounded by thousands of trees. It was an amazing experience where I was immersed in something greater than man. It was pretty intense,” he said, adding that as his mind gradually cleared, so did his skin condition.

After four months of travel, Heilbrunn said he realized he’d found all the answers he’d been seeking and flew home to pursue the destiny he’d envisioned — writing a book to encourage others to go “off the beaten path.”

The day after he arrived home in July 2014, he started his book. With no past experience at long-form writing, it took months to learn how to write and structure a book, and then he launched a Kickstarter campaign to cover the cost of its publication. To share his experiences in the meantime, he started a website and blog (jakeheilbrunn.com/eyesfullyopen) and published numerous articles and videos to inspire other young people.

His anxiety problems in college were profiled by psychologist Susan Heitler, Ph.D., in an article on the website Psychology Today. And in April, he spoke to 2,000 students at Torrey Pines during Mental Health Awareness Week. He also sent an unsolicited manuscript to his literary idol, Guillebeau, who responded that he gets 50 book review requests a month and wasn’t likely to give it a read. But the book struck a cord in the author and a week later he sent back the positive blurb.

Heilbrunn said he’s not sure “how much noise” the book will make, but he’s hoping it spurs invitations to speak to high school and college groups. As for what’s next, he’d like to work with a travel company developing a gap-year program that encourages personal development and community service. His end goal is to encourage young people to listen to their inner voice.

“I want to give others the confidence that they’re not alone. I want to give them the acceptance and support they need to pursue a life that excites them,” he said. “I think we all create our own destinies. I just took the time off to figure out what that was.”