Beyond the BLT: Other tomato sandwiches to try 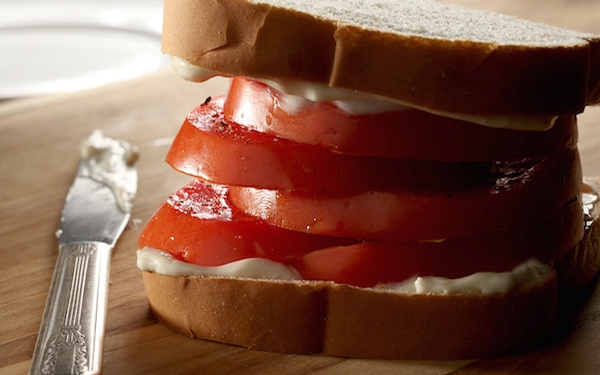 While we all have access to tomatoes in even the depths of winter, the words we use to describe them all sound like other names for disappointment — mealy, bland and sad. But describe an encounter with the best summertime tomatoes, and suddenly it sounds as if you’re reliving some steamy affair — luscious, sumptuous and messy.

The best summertime tomatoes have a super juicy interior with a taste that hovers from sweet to acidic to, most importantly, savory. You probably think I’m joking, but tomatoes contain a high proportion of glutamic acid, which also lends Parmesan cheese and soy sauce their oddly meaty powers. Kind of amazing, no?

This partly explains the appeal of the summertime tomato sandwich. Even though you’re feasting on fruit (tomatoes are, as you know, not a vegetable), something feels greedy and exciting about the whole affair.

As an American, I make sure to eat my fair share of BLT sandwiches; when done right, it is a nearly flawless creation. But it’s not the only word on tomatoes and bread. There’s a wide world of options out there, and making the slightest adjustment to the bread or the fat used completely changes the result. The only rule is to keep things simple.

Let’s start with the obvious. We’re all heard of bruschetta, right? At its simplest, the base recipe is nothing more than toasted or grilled slices of bread rubbed with garlic and drizzled with olive oil and salt. If you’re using great bread, this can be satisfying, if a tad boring. But add tomatoes to the mix and maybe some torn basil, and now you have one of the most ubiquitous appetizers on earth. The crunch of the bread contrasts with the soft chopped tomatoes, with the garlic heat coming at the end.

In northern Spain, they also serve a toasted bread and tomato dish called pan de tomate (or pa amb tomaquet in the Catalan language), but while the ingredients are extremely similar to bruschetta, the dish differs dramatically. Instead of neatly chopped tomatoes and a pop of bright green basil, cooks drag a halved tomato across the toasted bread, saturating the slice and leaving a trail of pulp and seeds in its wake. Compared to bruschetta, it’s a messy, unkempt sight. But it’s immensely satisfying, perhaps even more so than the Italian version, because of the mix of crunchy toasted bread and the soft tomato-soaked interior. So what if looks like you’re eating an old soggy shoe?

If you prefer your sandwich more handsome, follow the example of Denmark’s meticulously composed open-faced sandwiches, called smorrebrod. Though topping options are nearly limitless, they all start with a firm foundation of grilled or toasted rye bread spread with butter. One of the simplest is to pair sliced tomato with hard-cooked egg and watercress. You could stack all the ingredients on top of each other, but Nika Hazelton, in her book “Classic Scandinavian Cooking,” suggests placing eggs on one side and tomatoes on the other, with watercress neatly positioned on top. Be as fiddly as you like.

The result certainly looks much neater, but if you’re using plump summertime tomatoes, each bite is still adequately messy. The sliced egg adds a creaminess, while the tangle of watercress lends a pleasing peppery bite.

Not all tomato sandwiches need to be toasted. In the Southern United States, tomato sandwiches are usually built on untoasted, pearly white bread. While the softness of the bread seems destined to buckle under the juicy tomato slices, a healthy coating of mayonnaise helps protect it. What kind of mayonnaise? According to Southern cookbook author Virginia Willis, store-bought brands are actually the traditional way, with the regional brand Duke’s being mentioned often, though Hellman’s works, too. Honestly, I quite enjoyed the sandwich I made with Japanese Kewpie mayonnaise, though that will seem sacrilegious to some.

Regardless of which recipe you try, the tomato sandwich should be unreasonably messy, necessitating a nearby stack of napkins for backup. That part of the sandwich crosses all borders.

1 clove garlic, peeled, sliced in half

1. Chop the tomato, discarding the core, and transfer to a bowl. Season with a pinch of salt and pepper. Stir well; set aside for 10 minutes.

2. Heat a broiler to high. Place bread slices on a baking sheet; transfer to the top rack of the oven underneath the broiler. Cook until bread is well toasted on top, about 2 minutes. Flip and toast bread on the other side, about 2 minutes. Remove and immediately rub one side of both slices with cut side of the garlic.

3. Spoon the chopped tomatoes over the garlic-rubbed side of both slices of bread. Drizzle each with olive oil; garnish with fresh basil.

1 clove garlic, peeled, sliced in half

1 large tomato, cut in half

1. Heat a broiler to high. Place bread on a baking sheet; transfer to the top rack of the oven underneath the broiler. Cook until bread is well toasted on top, about 2 minutes. Flip and toast bread on the other side, about 2 minutes. Remove and immediately rub one side of both slices with cut side of the garlic.

2. Drizzle both slices with olive oil. Take a tomato half and firmly rub it on the top of one slice of bread, leaving some of the pulp and seeds behind, but not the skin. Repeat on other slice. Season with salt and pepper.

1. Heat a broiler to high. Place bread on a baking sheet; transfer to the top rack of the oven underneath the broiler. Cook until bread is well toasted on top, about 2 minutes. Flip and toast bread on the other side, about 2 minutes. Spread one side with butter.

2. Place slices of tomatoes on half of the bread. Place egg slices on the other. (You can also build egg and tomato slices one on top of the other.) Season with a sprinkling of salt and pepper. Top with watercress.