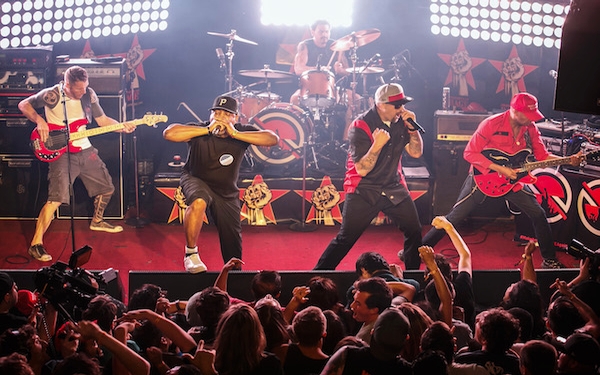 When members of Rage Against the Machine, Public Enemy and Cypress Hill first got together to form Prophets of Rage, they made a point of playing gigs that so-called supergroups normally couldn’t be bothered to consider: a rooftop along Los Angeles’ Skid Row, a protest rally at a public park outside the Republican National Convention in Cleveland, a state prison in Northern California.

In the spirit of these guerrilla-style shows, the latter gig didn’t actually occur inside the prison grounds at the California Rehabilitation Center in Norco, Calif., as originally scheduled, but in the streets outside. The plug was pulled on a brief charity concert that was to occur inside the grounds as organized by Jail Guitar Doors, founded by MC5 guitarist and former inmate Wayne Kramer, until government authorities changed their minds at the last minute.

“Wayne’s program provides musical instruments to prison programs as rehab tools and also helps facilitate musical performances in prison,” says Prophets of Rage guitarist Tom Morello. “We wanted to play at the Norco facility, and had permission to do so, for 600 prisoners in the yard. We wanted to film it, but at the last minute we were told that anonymous calls had been placed to government authorities warning that we’re supporters of Black Lives Matter and that we’d instigate a riot. The prison warden wanted the show, but then canceled it.”

The band — which includes Morello and his former Rage Against the Machine bandmates Brad Wilk (drums) and Tim Commerford (bass), plus Public Enemy’s Chuck D and DJ Lord and Cypress Hill’s B-Real — decided to play outside instead.

“We set up on a public street between the prison and a Pop Warner football field, and pointed our speakers at the prison and played our show,” Morello says. “I guarantee you everyone in the county heard the show, whether they were behind bars or not. The cops were looking on in great numbers, but let us play.”

Before departing, the band left behind 50 guitars for the prison population.

“When we put this together, the big question was, ‘What kind of a band is this going to be?’” Morello says. “Our first gigs were skid row, a political convention, a state prison. We’re on a tour where we’re giving proceeds to food banks and homeless shelters. We did not want to behave like a typical band.”

Though the Prophets of Rage tour is playing some fairly typical venues the ticket prices are relatively modest, starting at $20.

Morello says he was motivated to kick-start the band after reading reports of how presidential candidates Donald Trump and Bernie Sanders were “raging against the machine.”

The guitarist has merged rock, protest music and activism since the early ‘90s in Rage Against the Machine and in his solo guise as the Nightwatchman, as well as a sideman for Bruce Springsteen. Morello grew up in Libertyville, Ill., where his schoolteacher mom Mary Morello was an activist who founded the anti-censorship group Parents for Rock and Rap in 1987. He worked for U.S. Sen. Alan Cranston in the late ‘80s and “saw how the political sausage is made.”

“I got rich guys on the phone to ask for money, and he (Cranston) returned the favor,” Morello says. “It’s not a democracy when the banks decide what happens in it.”

Ever since, his music has brimmed with political undertones. As the current political season unfolded, Morello felt a familiar urge. He wanted to dig into and update some of Rage Against the Machine’s protest songs to speak to a time when “the country, the world, feels like it’s teetering on the edge of the abyss.”

His first call was to the Rage rhythm section of Wilk and Commerford, then Chuck D and B-Real.

“Public Enemy took Rage out on its first ever tour up the West Coast” in the early ‘90s, Morello says. “His lyrics and his band’s music are one of the cornerstones of Rage. They provided not only political inspiration lyrically, but musical inspiration to me as a guitar player. I tried to approximate the Bomb Squad soundscapes on my guitar. And B-Real was also important — Cypress Hill provided the hip-hop music that was listened to most during the creation of the first Rage album, and B-Real was in the ‘Killing in the Name’ video. He and Chuck have been musical comrades for a long time.”

Morello says he did not reach out to Rage singer Zack de la Rocha about the project, and offers this explanation: “Zack’s been working on his own music for quite some time, and we got his blessing for this project. Chuck and Real both called him, and we pay homage to his lyrics and contributions to the songs. We didn’t want to be a nostalgia act. The idea was to Rage-ify the PE and Cypress Hill catalogs, to draw on that music and create something new for 2016.”

The band is playing some new songs on tour, some of which have been recorded on a Prophets of Rage EP, “The Party’s Over.”

Does the group have a future beyond the election season? Morello says it does.

“We’ve got new songs percolating and we’re constantly doing creative mash-ups on stage — an Audioslave riff with PE lyrics, or mixing Beastie Boys with Cypress,” Morello says. “Rage was a potent band, but we spent a lot of time in the world of band drama. This band spends all its time in making music and doing political work. We’re absolutely continuing beyond this year. People are desperately hungry for a band that has a point of view and speaks truth to power.”

For Morello, the gig also brings him full circle, to his pre-Rage days when he was struggling to find his place in the music world. “Every once in a while I do pause and look over and think, ‘I’m in a band with the Hard Rhymer,’” he says, referring to Chuck D. “I remember when I was in my first band Lock Up in a lonely Waffle House on tour (circa 1990), listening to (Public Enemy’s) ‘Fear of a Black Planet’ and thinking this is the greatest band of all time.”

But even the mighty Chuck D isn’t perfect, Morello has found. “One thing I’ve learned about him that’s frustrating is that he refuses to use the Waze (navigation) app when he’s driving in Los Angeles,” he says. “We’re waiting in the studio to play and it’s always, ‘Where’s Chuck?’ ‘Why did he take 101?’ He’s always late because he does his driving by sextant.”