For Local Natives, the pitch pays off 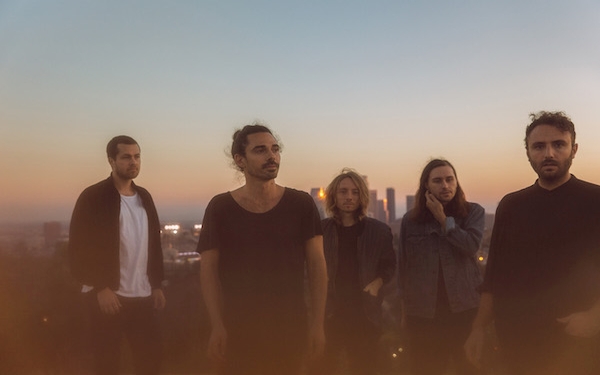 Seated around a kitchen table, three members of the Los Angeles rock quintet Local Natives were having a conversation recently about songwriting, band dynamics and the group’s 13-year ascent, which began when its founders were teenagers living in Orange County.

Unlike most bands, said Ayer, whose soaring tenor opens one of the new album’s most majestic songs, “Coins,” Local Natives’ creative process isn’t the result of one or two leader-tyrants looking for ego-feeding glory by acting on a singular vision.

With three equally skilled writers who also happen to have pristine voices, compromise is crucial, a lesson the act learned on its 2013 breakout album, “Hummingbird.” A graceful, melancholy work with moments of exuberance, it focused on the loss and heartbreak members were enduring at the time. It was written with all of them in the same room together.

But a conundrum remained as the Local Natives started work on “Sunlit Youth” in 2014.

“Everyone’s bringing their influences in,” said Ayer. “How do you make that into something with a cohesive sound, that makes sense? Where you can be diverse and also have these threads throughout the songs? I think we’ve been pretty good at that musically, but I think this time around we wanted to bring the lyrics into the fold.”

To accomplish that, communication was essential. So for the first time, guitarist-keyboardist Ayer, multi-instrumentalist Hahn, guitarist Rice, drummer Matt Frazier and bassist Nik Ewing talked themes from the start. The intent, said Rice, was “looking at the world and seeing what’s happening in the world.” He added that they also discussed the realization “that we don’t have to follow some path. We actually have agency in our own lives.”

Or, to quote the anthemic new song “Fountain of Youth”: “I’ll tell you a secret: We can do whatever we want.”

With a devoted fan base whose foundations were laid during the MySpace era and built through years spent on the road perfecting pitch-perfect rock songs, Local Natives has become one of Los Angeles’ most acclaimed bands, that rare group that with each release has further defined its place in an increasingly stratified music world.

The band has climbed farther up the charts with each album. “Gorilla Manor” (2010) peaked at No.160 on the Billboard Top 200, and three years and hundreds of touring dates later, “Hummingbird” debuted at No.12. Whether the act can better that tally will be determined on next week’s charts, but writing hit songs was never the intention.

Still, the scream-along response to the new work during Local Natives’ August set at Lollapalooza was immediate.

Ditto an impromptu concert in July, when the band teased its new work by climbing atop the roof of its longtime rehearsal space in Silver Lake to play new songs. The group announced the show on social media, expecting only a few hundred devotees.

Instead, a few thousand showed up, mobbing the single-story space and singing along to old and new anthems like “Villainy,” “Fountain of Youth,” “Breakers” and “You and I.” The set ended up being covered on TV news as a rare moment of harmony amid the crime stories.

Local Natives’ three writers have worked in unison since before the group’s first Los Angeles residency, at the Silver Lake Lounge in 2008. Coming of age during a moment when Silver Lake had been dubbed the hipster capital of America, the band offered buoyant vocals to augment delicate guitar rock that celebrated nuance and clarity. The way they wove voice, guitar and rhythm had a buoyant Southern California energy that suggested some weird combination of the Beach Boys, Jackson Browne and Radiohead.

In fact, in attendance during one of those gigs was Phil Costello of Red Light Management, who previously had worked with Radiohead, R.E.M. and Mazzy Star. His label imprint, tbd records, issued Radiohead’s 2007 album “In Rainbows” in America.

Since then, Costello has managed acts including Bat for Lashes, Belle Brigade, Interpol and Other Lives, and for years has roamed the Los Angeles club scene looking for talent. Since he first saw them, he’s dedicated much of his nonfamily energy to Local Natives.

Costello wasn’t even at the club specifically to see Local Natives in ‘08, he recalled over the phone while with the band in Europe, and was taken aback at first blush because he knew nothing about the act.

“I’m standing in a room with nobody really there, and here’s five guys up on a stage playing and singing their asses off and harmonizing. I was caught off guard by the talent that was already there.” A few months later, at the South by Southwest Music Festival in Austin, Texas, Costello’s hunch was confirmed.

Though he hadn’t signed on to manage them, Costello helped them get a few Austin sets, and by the time the band finished its last gig, the biggest management companies in the country were pitching their services.

Costello encouraged the group to take the meetings. All he asked was that he get the last one. He did, and they’ve been a team ever since.

“They don’t offend each other, and they’re proud of one another and their writing skills, so they’re more than happy to help, make comments or make suggestions,” said Costello . “At times, it ends up with a completed song. The kernel might have been brought to the table, but the rest of the song has been fleshed out by all three writers.”

“Five guys in the band, and everyone’s bringing their influences in,” said Rice. “How do you make that into something that feels like a cohesive sound?”

For “Sunlit Youth,” that meant taking time off after 18 nonstop months supporting “Hummingbird” to regroup and think about the next project. After a few missteps trying to work the old way, band members gathered to brainstorm a direction. Rice recalled the conversations starting broad. “What does the record feel like? Where are we all right now?”

“Constant conversations were really helpful to find if there were any common threads,” added Ayer. “Are we going down the road together? Are there any similarities to how we are feeling and what we’re writing about?” They decided to work either alone or in teams to write songs, and then pitch the best stuff to the group.

That was a big deal, Hahn said over beer and pool with Ewing near Local Natives’ Atwater Village studio and rehearsal space. “It was fun to see what stuck with the group. What songs excited everyone. Which ones were unanimous — ‘Yeah, that’s a direction we’re excited by.’”

The band ended up with 50 to 60 songs, a massive haul compared to the 15 or 16 it had generated in advance of earlier albums. The members pared them to a dozen, and what stuck were precisely crafted songs that soar with an effortlessness that belies the work spent creating them.

Ewing has been struck by the myriad ways the writers approached their craft. “Kelcey will get a melody, and he really needs to flesh out all the bedding underneath for him to comfortable,” he said. “Taylor will be just a guitar and a vocal and have a vision. And Ryan produces a bunch of stuff.”

Among the most memorable is “Coins,” built from an idea that Hahn had but whose exuberant opening lines are sung by Ayer. “Fountain of Youth” is one of a number of tracks that reference young energy, and a few others pour forth celebrations of Los Angeles-bred vibes. The effervescent “Dark Days” is a catchy synth pop song that features harmonies courtesy of Nina Persson of Swedish pop-rock band the Cardigans.

Each track features different textures and tones, a result of embracing new instruments and approaches to writing. “If you’re following something that’s exciting you, everything’s going to take care of itself,” said Ayer. “That’s the space that as a band we talked a lot about trying to exist in.”

The band has determined to remain independent. In America, “Sunlit Youth” was released through a one-off deal with Loma Vista after the previous two albums were issued by the indie label French Kiss.

Said Hahn, “One thing that we found was, we’ve been doing it since we were so young, that you couldn’t rely on anybody. This is our lives and our career and our music, and nobody’s going to work as hard as we are to share it with people. There’s not some break that you get that opens it up for you, really. It’s all on us.”