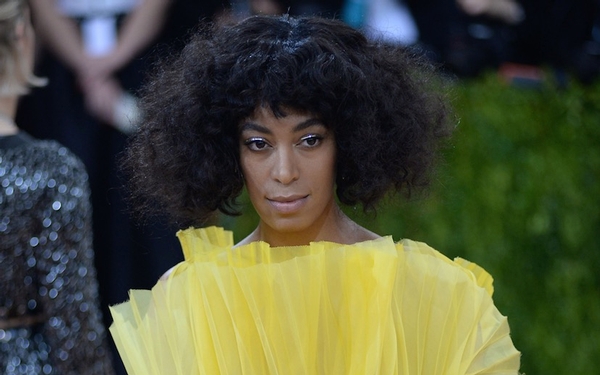 In an era of flashy album drops and steaming music exclusives, Solange Knowles, who performs simply as Solange, opted for intimacy when it came to rolling out her highly anticipated third full-length effort, “A Seat at the Table.”

It started a week ago, when the singer-songwriter quietly launched a new website with an invitation for fans to sign up.

The minimalist site was reminiscent of a computer’s home screen, and it changed with every refresh of the page.

A folder of links lightly documented her career, including songwriting/producing credits and creative art direction.

And there was a major incentive for forking over basic contact information: the chance, the site read, to be one of 86 people to receive “a seat at the table.”

What that “seat” would be for — A concert? A VIP experience? A dinner with Solange? — became clear on Tuesday.

Throughout the day those fans who were part of the first-come, first-served invitation received a limited-edition hardcover book.

Curated by Solange, the double-sided book is a visual and lyrical companion to the album, arriving through the singer’s Saint Heron imprint and Columbia Records.

One half of the book is dedicated to the lyrics and poetry Solange wrote for the project.

Lyrics are presented as short poems or laid out abstractly across the page.

Some pages appear to be dedicated to poems or mantras that possibly connect records, while others are simply blank.

“Now I don’t want to bite the hand that’ll show me the other side … but I didn’t want to build the land that has fed you your whole life,” is written across two white pages before the words “bite the hand” appears in repetition 880 times. (Yes. We counted.)

The line, “Do you belong? I do,” appears at the very bottom of one page.

It’s a phrase that anchored a powerful essay she penned a few weeks back after experiencing a hostile incident at a Kraftwerk concert, which led her to examine the discomfort she’s experienced in predominantly white spaces.

“You and your friends have been called the N-word, been approached as prostitutes, and have had your hair touched in a predominately white bar just around the corner from the same venue,” she wrote in the piece.

A track called “Don’t Touch My Hair” will appear on the record.

Inside the book are two square bookmarks embossed with the phrase “Don’t let anybody steal your magic.”

The other half of the book is dedicated to impressive art photos shot by Carlota Guerrero (the Barcelona-based photographer is also credited with the art direction of the project).

In one shot the singer is nude and dipped in gold paint.

The album is described as “a project on identity, empowerment, independence, grief and healing,” and those themes are apparent throughout the words and musings shared in the book.

The 21-track album, which Solange began writing and producing in 2013, features the most collaborations the 30-year-old has included on a record.

“I am overwhelmed with gratitude and excitement to share this body of work I have written, with you,” Solange wrote.

“A Seat at the Table” is the singer’s first full-length album since 2008’s “Sol-Angel and the Hadley St. Dreams” and is the follow-up to her critically acclaimed 2012 EP, “True.”