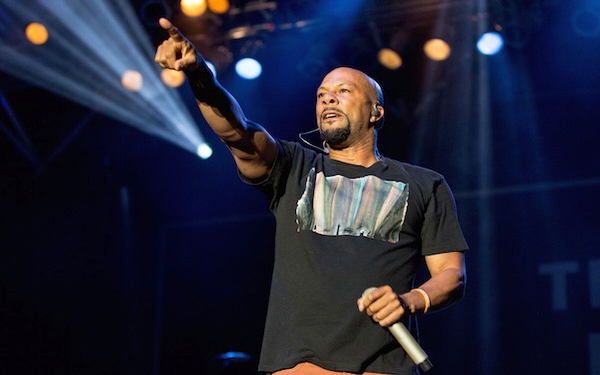 Common may be a Hollywood actor, an activist, a philanthropist, author and businessman, but at heart he is a South Side Chicago kid who grew up loving hip-hop and then spent most of the past 20 years building a legacy as one of the most significant rap artists ever out of his hometown. And he’s pretty stoked about a new generation of Chicago hip-hop that appears to be building on some of that foundation he helped put down.

“There’s love at the heart of it — the spirit of the music, the fact that it does have a consciousness to it, that it is socially aware,” he says. “Chance (the Rapper), Vic Mensa, Noname, they have their own voices. That humanity that Chicago artists have been bringing, that’s what I love about hip-hop culture here.”

Born Lonnie Rashid Lynn 44 years ago on the South Side, Common helped shape the sound of Chicago hip-hop by blending “dusties” soul and jazz with socially conscious lyrics on such landmark releases as the 1994 single “I Used to Love H.E.R.” and the albums “Like Water for Chocolate” (2004) and “Be” (2005). He’s greatly influenced a couple generations of local upstarts, from Kanye West and the Cool Kids to Chance, Mensa and countless others.

Now perhaps better known as a Hollywood actor who has appeared in more than 40 movies and TV shows, Common came roaring back to the hip-hop world in 2014 with the hard-hitting social themes of “Nobody’s Smiling,” which reunited him with his longtime producer No I.D., and then scored Grammy and Oscar awards for “Glory,” the gospel-accented hit from the “Selma” soundtrack with singer John Legend. He’s set to release a new album next month.

In an interview, Common discussed his forthcoming album and the need for activism in music. Here are some excerpts:

Q: It seemed like you felt re-energized when you made “Nobody’s Smiling.” What inspired you to make that type of album at this stage in your career?

A: I love music, art, but for a while there I was a lot more interested in filmmaking, acting, producing. I’m still impassioned about acting. But when the purpose is there, when I have purpose in music, it resonates on another level. I think you can hear it in that album. There was a lot of violence in Chicago, and beyond the violence, people were just needing hope and opportunities to succeed. I wanted to be a voice for that, and that’s what I tried to be in “Nobody’s Smiling.” I was looking not just at Chicago’s struggles, but looking at America, and giving a perspective of what blackness is. I was trying to say that we should be embracing all the different nationalities — diversity is a great thing. Music can inspire and give hope, and be a conduit for change. I feel energized right now by all the beautiful art out there — Ta-Nehisi Coates’ book (“Between the World and Me”), “Hamilton,” what’s going on in Chicago hip-hop. I’ve been rereading James Baldwin. I feel sparked as an artist.

Q: Will your next album be in that same vein?

A: Yes, “Black America Again” I made to speak to the times. It’s God music, social political music, a perspective of blackness — all the colors we are, the love, the joy, the fears, the power. Karriem Riggins and Robert Glasper produced. It’s not like “Water for Chocolate,” but it has that album’s musicality and a hip-hop boom-bap-ness. It’ll come out Oct. 28. This is a political year — it feels chaotic, almost surreal, and I want the music to speak up before the election. I want to speak up the way Marvin Gaye, Bob Marley, James Brown and Public Enemy did.

Q: What do you think of the gospel feel in a lot of current Chicago hip-hop?

A: It’s a bunch of artists being courageous enough to truly express who they are. Gospel has played an important part in Chicago culture. . I describe my project as God music, about the black experience, black innocence, black love, the courageousness of the artist, that’s why we’re getting more artists expressing that. Everyone else is sampling trap songs, but they’re saying, no, God has influenced my life, and this is what that sounds like.

Q: There has been skepticism about gospel music and religion within hip-hop for a long time because it doesn’t address the reality of the streets in the minds of a lot of young people who are going through tough times. On “Kingdom” (from “Nobody’s Smiling”) the narrator expresses some of the same concerns (“My whole life I had to worry about eatin’/ I ain’t have time to think about what I believe in”). How do you overcome that?

A: That’s a battle that people go through on the streets. How can I deal with spirituality when I am just trying to deal with the practicalities of life? But putting spirituality in your beliefs first can be a solution if you act on it. Be active in those things, even during the most difficult times. Having faith in the creator doesn’t mean sitting on your butt after you say your prayers, but going out into the world and putting those words into action.