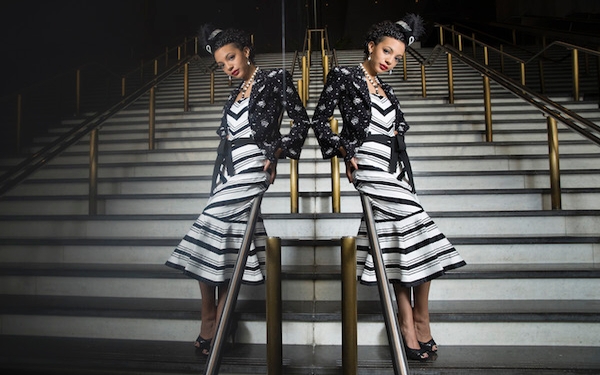 The best of 1930s glamour — body-conscious, A-line sheaths and collarless jackets — are joining the coolest of 1970s disco chic (think belted trenches and printed tunics) to create a millennial style that’s as dressy as it is sporty.

And doesn’t that perfectly define the modern woman?

Whether for a schoolteacher or CEO, the boss-lady wardrobe requires a level of professionalism that extends beyond the leggings-tunic-blazer-and-boot combo.

This fall, she’s investing in better-quality pieces: Her dresses and skirts are longer and stop just below the calf. She’s moved away from chunky cardigans to fine-knit sweaters and blouses that feature cute bows at the neck.

Pants remain slim-fit but not skinny. Shoes, neither stiletto nor flat, are thicker and walkable. Mauve is a key pastel for this winter, but the bulk of her wardrobe’s palette will go dark. Look for navy blue and burgundy’s gallant return. And, when it’s appropriate, it will get topped off with a blazer. Or pulled together with a fedoralike cloche.

“Young professionals are graduating from law school, completing residencies, and finishing up graduate degrees,” said Nataliya Yermolenko, assistant buyer for women’s clothing at Boyds Philadelphia. “They are trying to enter the workforce and want to be taken seriously. Maybe even appear a little older.”

“The difference is that previously at local events, you were cooler if you looked like you didn’t try,” said Maureen Doron, owner of Skirt in Rittenhouse and Bryn Mawr. “Now, when going to work, a cocktail party, or a charity, we are going to see people put more of an effort into really looking great.”

Could it be that glamour is on the comeback?

It’s too early to tell.

One thing’s for sure. No matter what social ills define a decade — unemployment, racism, poverty, the kind of sexism that makes glass ceilings more like concrete clouds — we often romanticize women’s fashion of the day. Fashion’s most glamorous decade was widely considered the ’30s — even though everybody was broke. How could that be? The glamour came from the simplicity of the looks: a sheath that melted into the body, textured accessories, and deep lips.

And now, decades after the Great Depression, ’30s fashion has found its way back.

In fact, for many years, we’ve been drawing solely on strong looks that defined past decades; virtually no new silhouettes have been created since the mid-’90s.

For example, women’s wear in 2013 was heavily, if not wholly, inspired by the mixed media — velvet and silk, florals and stripes — of the 1920s. That was followed by a serious nod to all things ‘60s mod, like colorblocking, moto jackets, and skinny pants, in 2014. Boho and fringe trended in the past year as we were all about early ’70s style. It all made for interesting, Pinterest-driven fashion times.

For this fall’s trends, we have two decades equally represented.

“They are both decades that feature softer silhouettes and a certain purity of line,” said Clare Sauro, fashion historian at Drexel University and director of the school’s 14,000-piece costume collection. The silhouette of a 1930s Claire McCardell dress, for example, is very similar to a 1970s Halston.

Once boyish flappers, 1930s young women were settling into their wardrobes sans the Roaring Twenties glitz. Wives with husbands whose jobs were casualties of the Great Depression were now working outside the home, and basing their sartorial spunk off Hollywood’s power women, from Joan Crawford to Bette Davis.

Teenagers during Twiggy’s thin heyday in the ’60s, young women of the ’70s had filled in, too — and, having been in the workforce for some time, they wanted more respect. Legal secretary Iris Rivera refused to make coffee for her bosses in 1977 (and lost her job), but the firing launched a secretary coffee protest. The next year, Mary E. Clark became the first woman to become a general in the U.S. Army. The influence of Pam Grier’s Foxy Brown and Charlie’s Angel Farrah Fawcett filled wardrobes with leather trenches and bell-bottoms.

In other words, the young women of the ’30s and ’70s decided it was time to dress like a boss.

You might say the millennial woman is coming into her own, too. Her body ideal is more Beyoncé than bony. She’s learned from Sheryl Sandberg how to lean in, and, in July, she discovered it was possible for a woman to be nominated by a major political party to run for president.

So, as she gains confidence, it’s important for her wardrobe to reflect that. She’s getting fewer throwaway H&M T-shirts and more statement pieces, like a $250 Rebecca Minkoff sheath, while she pays rent and her school loans and keeps her ClassPass current.

“When you have less, you spend a little more wisely,” Yermolenko said. “Instead of buying 15 party dresses, my customer is getting just what she needs. She is starting to respect fashion more.”