Johnny Carson ‘Vault Series,’ a look at life in the 1970s 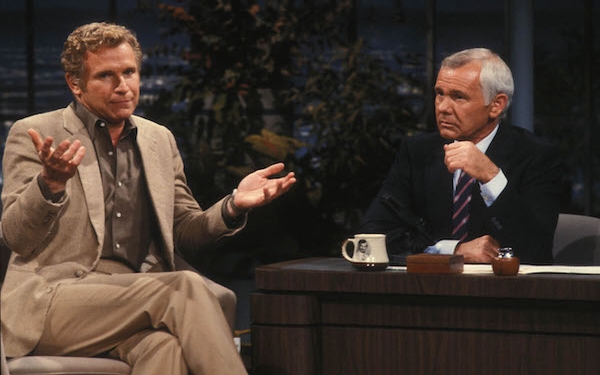 Johnny Carson remains the undisputed King of Late Night, but perhaps we should tack on another title: history teacher.

“The Tonight Show Starring Johnny Carson: The Vault Series,” previously available online and now being distributed on DVD by Time Life, is packaged as a die-hard collector’s item with complete episodes and vintage commercials.

As a tribute, it’s a raspberry. The dozen episodes I watched from the 1970s are not nearly as polished, witty or groundbreaking as our memories would like to believe.

As a time capsule, it’s pure gold. Few documentaries better capture the spirit and shortcomings of an era where the wardrobe had more of a voice than minorities and women.

In a revealing clip from 1977, Carson asks comedian Richard Pryor whether he feels a particular responsibility toward “the blacks” going to see his upcoming film, “Greased Lightning.”

“The blacks?” says an incredulous Pryor, who gets his revenge later, mugging and giggling through Carson’s attempts to interview consumer reporter David Horowitz.

At least Pryor got an invite. The collection includes 36 full episodes, but only six of the guests are people of color, including heavyweight champ Joe Frazier, whose charm in 1972 had not yet been dimmed by Muhammad Ali. The only black female is stuntwoman Peaches Jones, who, unfortunately, is not around to kick Ed McMahon in the windpipe when he lustily announces that his boss will welcome a lady who owns a filling station.

There are plenty of other female guests whose primary purpose seems to be to goose male hormones. Joanna Cassidy laments how she felt like an ugly duckling growing up, causing the rest of the male panel, including Carl Reiner, to trip over their wagging tongues, insisting she’s a knockout. Lynda Carter provides a fascinating insight into how she struggled financially, despite “Wonder Woman,” but Carson is much more interested in experiences that never happened on the “casting couch.”

The commercials are equally telling about the era’s gender gap. Jaclyn Smith and Farrah Fawcett-Majors, working as pitchwomen before being recruited for “Charlie’s Angels,” coo in tones reserved for dogs and dirty old men.

It’s hard to turn off the astonishing examples of political incorrectness, but try — at least long enough to appreciate an early appearance by Andy Kaufman, breaking all the stand-up rules and then sitting down for what may be the most sincere interview of his career. There’s also a rare U.S. performance by Russian clown Oleg Popov, and Buddy Rich sets aside his ego long enough to show why some consider him the greatest drummer of all time. Pop-culture aficionados will devour Michael Landon’s blooper reel from “Little House on the Prairie.”

The national mood in the ‘70s permeates these shows, and not just in the jokes about former Vice President Spiro Agnew. In episodes from March 1974, smack-dab in the middle of the Watergate crisis, Carson makes numerous references to streaking — a hot fad then, with people dropping their clothes at public events, including the Oscars a month later. During one opening monologue, a male streaker tears across the stage, a moment that Carson appears to respond to with bemused shock.

I didn’t buy it for a second. Turns out the “intruder” was longtime “Tonight Show” writer Pat McCormick. The moment may have been manufactured, but the overall representation of the era is not — for better or worse.

4 THINGS YOU DIDN’T KNOW ABOUT ‘THE TONIGHT SHOW’

Open “The Vault Series” and brace yourself for some startling revelations:

1. Johnny Carson wasn’t all ears. Nostalgia dictates that Carson was TV’s most gracious host, but there are numerous examples of him checking out, most notably during “Stump the Band,” the popular segment that forced the King to interact with the peasants. In one telling segment, Jaye P. Morgan rips into the host for giving his cigarette more attention than her.

2. Ed McMahon was a rock. The ultimate sidekick knew his primary job was to make the boss shine, but that didn’t deter him from delivering more zingers than you might recall, all the while hotfooting from one live commercial to another. McMahon is so impressive that you can almost overlook the night he was given permission to sing.

3. Guests didn’t appear in order of prominence. Those who got first billing were more likely to engage with the other panelists, which explains why B-listers Orson Bean and Suzanne Pleshette were introduced before Gene Kelly and Lorne Greene. This strategy pays off in dividends when Steve Allen sticks around to help Carson tear apart a very loopy Jack Palance.

4. The jokes weren’t that funny. Carson’s reaction to bombs is legendary, but he had to dip into that well of quips more often than you’d think. Stand-up comics didn’t always fare well, either, as evidenced by two Robert Klein routines that sail over the crowd’s heads. One explanation: Studio audiences weren’t as primed and coached as they are today.