A pepper with so many possibilities 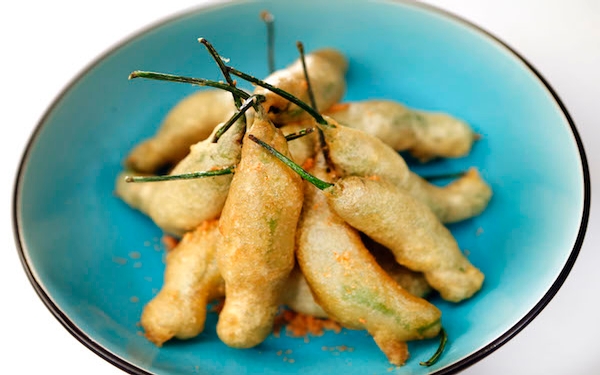 Go to many Japanese restaurants, and shishito peppers are as much a staple on the menu as bowls of edamame. Quickly sauteed until the vibrant green peppers soften and begin to blister, they’re often served in a small bowl, seasoned with soy sauce and a maybe a touch of vinegar, and garnished with a sprinkling of bonito flakes.

The Japanese peppers can be found year-round, though the growing season typically extends from summer to early fall. Thin-skinned, the delicate finger-length peppers are known for a mild sweetness offset with a gentle heat. Tame as they often are, every once in a while a pepper packs a jolt of heat, and tackling a plate can be quite an adventure.

Readily available in Japanese grocery stores, the peppers can also be found at farmers markets and are increasingly turning up in large supermarkets as they gain popularity. At the same time, chefs and home cooks are beginning to appreciate the pepper’s versatility.

“We all love shishitos in Japanese restaurants, but it’s fun to try something different,” says chef Neal Fraser. His menu at Redbird in downtown Los Angeles includes a spicy shishito dish tossed with bright fresh citrus juice and fish sauce, a creation of Redbird’s chef de cuisine, Jason Bowlin. The dish is served with crispy red quinoa and shaved orange bottarga, a colorful play on flavors and textures. “It’s at once salty and crunchy,” says Fraser, “with just the right amount of acid.”

“Shishito peppers are so popular right now,” says chef Zaz Suffy, formerly chef de cuisine at the recently closed 100 Wines in San Diego and now at the Prado at Balboa Park. One of Suffy’s favorite preparations is shishito tempura. But instead of serving the tempura with a classic dipping sauce, she sprinkles the pepper with bright red Sriracha salt she makes herself. “It adds a pop of flavor that balances the peppers perfectly.”

Because of their small size and delicate walls, the peppers can be added to a variety of dishes — seeds and all. Slice them up and add them to scrambled eggs, or char them quickly on a grill, the smoky notes complimenting the delicate heat of the peppers. Use shishitos to add mild spice to salsas, gazpachos and rich stews, or quickly pickle the peppers to serve as an appetizer or cocktail garnish.

Or stuff the peppers with tuna or cheese — fresh goat cheese is a natural pairing, the gentle grassy notes of the cheese a compliment to the mild heat of the peppers. The peppers also work well in a banh mi-inspired grilled cheese sandwich, layered with pickled carrot and daikon strips and sprigs of fresh cilantro.

Jonathan Whitener, chef and co-owner of the recently opened restaurant Here’s Looking at You in Koreatown, offers his own take on the peppers. He blisters the peppers and serves them alongside tonnato, an Italian tuna-based sauce he flavors with lemon, capers, fish sauce and Thai chiles. Whitener then garnishes the sauce with a pinch of the powdered dried plum known as huamei. The bright pink powder is at once salty, tart and sweet. “Shishito preparation is often so repetitive,” Whitener says. “I wanted to think outside the box.”

1. Heat the oven to 200 degrees. Line a rimmed baking sheet with aluminum foil.

2. In a large bowl, mix together the salt and Sriracha until the salt is evenly coated with the sauce.

3. Spread the salt out in a very thin, even layer. Place the salt in the oven and toast until the salt is completely dried, 2 to 3 hours. Remove from heat and cool. Pulse the salt in a food processor to break up the large chunks. This makes about 1 cup Sriracha salt, which will keep up to several weeks, stored in an airtight container in a cool, dry place.

Canola or vegetable oil, for deep-frying

1. Fill a large heavy-bottom pot with enough oil to come up the sides by about 3 inches. Heat the oil to 350 degrees.

2. Meanwhile, in a large bowl, sift together the flour, 1/2 cup cornstarch, the baking soda and salt. Whisk in the soda water to form a batter. Thin the batter, if desired with a little more soda water.

3. Toss the peppers with the remaining tablespoon cornstarch, dusting off any excess. Dunk the peppers, 1 at a time, into the batter, then place in the fryer.

4. Deep fry the peppers, a few at a time, until the batter is puffed and lightly golden, 1 to 2 minutes. Remove and drain. Season the peppers with the Sriracha salt and serve immediately.

Note: Adapted from a recipe by chef Zaz Suffy of the Cohn Restaurant Group.

20 minutes, plus overnight soaking time for the quinoa. Serves 2 to 4

1. Soak the quinoa in water overnight to soften. The next day, drain the quinoa well.

2. Heat a sauté pan over medium heat, and coat with a thin film of canola oil. Add the quinoa and cook, stirring frequently, until crisp, about 4 minutes. Remove from heat and transfer the quinoa to paper towels to drain and cool.

3. Heat a large heavy-bottom sauté pan over medium-high heat until hot. Add the oil, and when it begins to shimmer, carefully add the peppers, blistering them on all sides.

4. Carefully stir in the fish sauce and citrus juice, tossing the peppers to coat thoroughly. Remove from heat.

5. Using tongs, remove the peppers (leave the oil and liquid in the pan) to a serving plate. Garnish with the crispy quinoa, shaved bottarga and salt. Serve immediately.

1. Peel and finely julienne the carrot and daikon, and place in a glass or nonreactive container or bowl.

2. In a saucepan, heat the sugar, water, vinegar and salt over high heat, stirring until the sugar and salt are dissolved. Continue heating just until the mixture comes to a boil. Remove from heat and pour over the vegetables.

3. Stir the mixture, coating the vegetables and making sure they are submerged (if necessary, weight them down to keep them under the liquid). Set aside for 1/2 to 1 hour to quickly pickle, then cover and refrigerate. This makes about 3 cups drained pickles, which will keep, refrigerated, up to 2 weeks.

1/3 cup drained quick-pickled carrots and daikon, or as desired

1. Heat a griddle or cast iron pan over medium-high heat until hot. Add the shishito peppers and toast until softened and blistered on all sides, 4 to 6 minutes, rotating frequently. Remove from heat and set aside until cool enough to handle.

2. Spread mayonnaise on 1 side of each of the slices of bread. Top each slice with half of the cheese. On top of one slice, arrange the shishito peppers, then the drained pickles and cilantro sprigs. Top with the inverted second slice of bread to form a sandwich, pressing gently so everything stays together.

3. Heat the griddle over medium-high heat until hot. Meanwhile, spread mayonnaise on the outside of one side of the sandwich.

4. Invert the sandwich onto the hot griddle, and spread mayonnaise on the second (top) side. Grill the sandwich until the bread is crisp and golden-brown, and the cheese is starting to melt. Flip the sandwich and repeat with the second side. Remove from heat.

5. Slice the sandwich and serve immediately.