Hoobastank: Will Never be the Cool Band of the Moment 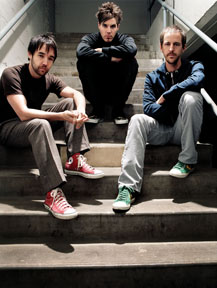 Three Grammy nominations. Over 2 million copies of The Reason sold in the U.S. Parting ways with a founding member. Getting "Punk'd" by Ashton Kutcher.

The past couple of years have been a whirlwind of sorts for the men of Hoobastank, to say the least.

Upon the release of The Reason at the end of 2003, the monster-ballad title track was everywhere from being one of the most played songs on the radio to an episode of "Friends" and an HBO promo spot. The song catapulted them a long way from the Battle of the Bands where vocalist Doug Robb and guitarist Dan Estrin first met in Agoura Hills, Calif.

With that tremendous success, one would assume the heat was on as the band went to work on the follow-up CD, Every Man for Himself. But Robb comments "There was a certain amount of comfort level like, I guess we don't have to prove ourselves to anybody not that we really tried to prove ourselves to anybody before. We never felt any pressure from the record label or outside influences, but there's always a little pressure on yourself. It‚s more to put out the best music that satisfies you the most. It's not like you can set out to duplicate success because there‚s so many variables there that you have no control over.

However, being in control of its own destiny is something the group has worked hard at since forming in 1994. Along with Chris Hesse (drums) and Markku Lappalainen (bass), Estrin and Robb honed their performance skills playing all over the San Fernando Valley at places like the Cobalt Café. In 1998, the quartet independently released a disc called They Sure Don't Make Basketball Shorts Like They Used To and even now at shows, you‚ll still hear die-hard fans yell requests for songs from that album, like Earthsick.

The band spent nights handing out CD samplers on Sunset Boulevard, landing gigs at the Troubadour and the Roxy. Eventually all the hard work paid off with a record deal that led to the release of Hoobastank's 2001 major label self-titled debut.

The album went platinum spawning hits "Crawling in the Dark" and "Running Away." Soon the band was on KROQ, its videos were in rotation on MTV and the four band mates began to tour the world with Estrin's childhood friends in Incubus and Linkin Park.

Robb remembers, "I got into this because it was just fucking fun as shit. I played my first show singing in my parents‚ backyard and after about three minutes I was absolutely hooked like crack. I knew this is what I had to do all the time such a rad feeling.

"That still is what drives me. I'd be lying to you if I say that sometimes that feeling is not as strong as it used to be, but sometimes it is. Sometimes you play a certain show where something's clicking and it's just like the first time."

While touring, the band does manage to have its share of fun both onstage and off. Robb recalls one of the most fun nights during a tour with 311,"It was the last show of the tour and I‚m getting ready to walk out on stage. They hand me the mic and they had mega-taped this huge dildo to it. I was subtlely trying to take it off during the show, but I couldn't with all the duct tape on it. So, I just sang with this big cock right next to my mouth the whole time. Then, about three songs into the set, 311 came out with a long table and some chairs, sat down and started playing cards in the middle of our set."

Robb and his band mates retaliated once 311 had just left the stage after its own set and was resting before the encore. "We ran out on stage with the lights out and started covering a Metallica song. The crowd thought it was 311, I don't know if they were stoked or just kind of like, huh? 311 ends up all on the side of the stage just cracking up looking at us. Then, they all came out and we finished the song together. It was pretty cool."

Life on the road hasn't been all fun and games for Hoobastank though. In 2003, Estrin suffered a near fatal accident on a mini motor bike and last year, Lappalainen amicably decided to leave the band. With his departure, the remaining members called up former Tsunami Bomb bassist, Matt McKenzie to fill in on show dates last summer.

McKenzie's more punk rock way of playing didn't turn out to be the best fit, so the group decided to find someone who was more its style. Enter Joshua Moreau. „Dan‚s known Josh for longer than we have. He played in a good friend of ours‚ band, Under the Influence of Giants, for about a year. He‚s a phenomenal bass player, without a doubt the best bass player. He's amazing, a really quiet mellow guy. He fits our mold. We're not crazy, we have our moments, but, he‚s a good fit personality wise," comments Robb.

With its lineup set, the band has begun touring in support of Every Man for Himself, an album Robb describes as "My favorite of the three by far, it's like a no-brainer for me. I don‚t know if that translates to fans feeling the same way, but it's definitely the record that I wanted to write.

"It's nothing that I haven‚t thought before, but I was just ready to say now. I think each song and the album as a whole is much deeper than the others. We didn't approach this record like we‚'re going to make a lot of singles or something like that. We just wanted to make a really good album from start to finish."

At least for Robb personally, recording Every Man was definitely the most fulfilling experience he‚s had thus far. He says, "I had a lot of wish I could of‚ type things on The Reason record. We wrote and recorded it so fast, it was a really unsatisfying recording process. We were just fortunate to have a success with the record."

And, has all of the success altered the guys who have been called almost „too normal‰ in their eschewing of the sex, drugs and rock 'n' roll lifestyle typical to most young rockers?

Robb, who was named one of People Magazine's 50 Most Beautiful in 2004 ˆ states, "I hate the entertainment aspect of my job. I don't like going to events that much. If I‚m invited somewhere, cool. If I'm up for an award somewhere, fine, no big deal. I'll jump through the hoops, shake hands, take pictures ˆ stuff like that ˆ but I'll be the last person in this band to show up to Œhot spots.' I guess in that sense, it's still about having fun. It‚s not about being the coolest looking band or being the cool band of the moment.

Every Man for Himself is currently available. For more information, visit www.hoobastank.com.