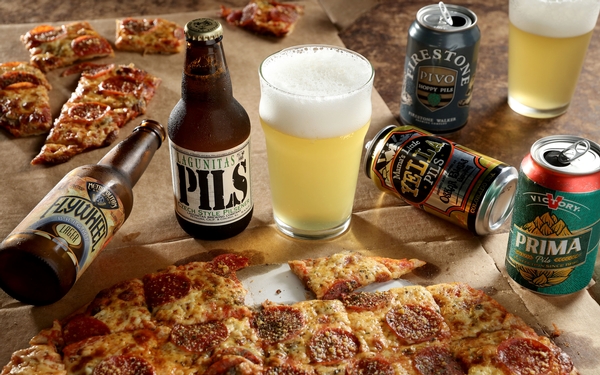 Beer and pizza. Pizza and beer.

A faultless pairing of food and drink, tested through the ages at birthdays and bowling leagues, in backyards and at bachelor parties, tied so seamlessly that the combination couldn’t possibly be improved upon, because why mess with perfection?

Here in the 21st century, we subscribe to favor, nuance and variety of choice. Ice-cold light lager with greasy pizza is no longer adequate.

With that in mind, we tested more than a dozen beers against five popular pizzas, reaching for new heights in beautiful pairings.

It’s all in a day’s work, but you can thank us later.

Pepperoni and pilsner is not just lovely alliteration, but also a perfect pairing. The key, however, is a pilsner showcasing pleasingly bitter European hops, rather than American hops (too fruity in this context). The muscularity of classic German- and Czech-inspired pilsner provides backbone against the spicy, salty pepperoni, while also clearing the palate between bites.

Faint taste buds need not apply, but this tart, briny style of beer rides shotgun to the greasy, hearty chunks of meat and earthy funk of the onions. Gose is a German ale that gets a dose of salt, which tingles and tantalizes the taste buds while accenting this pie’s hearty flavors.

The most elegant pairing on this list, but don’t worry — at heart, it’s still pizza and beer. The rustic and earthy saison is among the most food-friendly beers, but paired with these veggies and the pungent dose of garlic, it’s a seamless mix of bright, light and lively flavors.

We love our manhole-cover-sized pizzas here in Chicago, and there’s no finer version than one packed with spinach. A beer to pair with a 6-pound pizza isn’t easy — until you reach for kolsch. This once-obscure German ale has inched further into the mainstream, and hallelujah for that. It’s dazzlingly clean, with fruity overtones that allow it to stand up to either light or hearty dishes — spinach-stuffed pizza happens to be both, with rich creaminess that at heart is still just bread, cheese, tomato and spinach.

OK, fine, it’s not beer. But cheese pizza was a tougher pairing than I imagined (I tried, milk stout, I really tried). The simplicity of cheese pizza demanded simplicity in return. Apples and yeast. What could be simpler? But the recommendation here is a dry cider, and the drier the better. Ciders I wouldn’t care to drink alone sparkled beside the greasy cheese, which both drew out the fruit character in the cider and dried out the palate in advance of the next bite.

Special Features
How 2020 changed cooking for the better
188 views

Special Features
Eating in restaurants should be more expensive
140 views