The Eagle Huntress kicks butt in all the right places 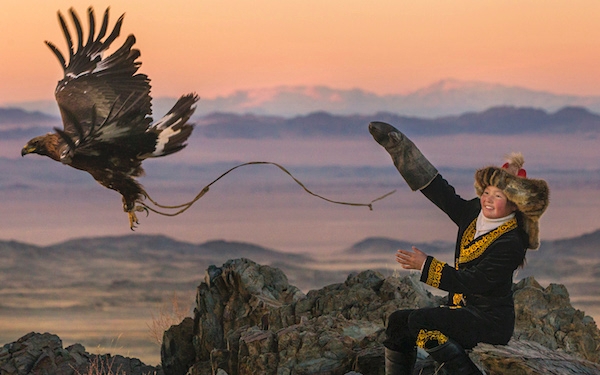 In the midst of some record-breaking political mayhem, it’s always good to be reminded that someone somewhere is doing something genuinely remarkable. We can perhaps even consider us lucky, because this little-big documentary The Eagle Huntress opens the door to not one, but two such people. On one hand, we have a magnificently courageous 13-year-old girl who simply gallops through each obstacle in her path, and on the other, we have the first-time director who managed to capture her story with breathtaking persistence and an equal sense of awe.

As many stories of inspiration go, director Otto Bell’s begins with a photograph. Stumbling upon photographer Asher Svidensky’s BBC story featuring a picture of a young, rosy-cheeked girl beaming as she sets her Golden Eagle off to flight from her beautiful snowy mountaintop perch, Bell couldn’t shake the image from his memory. The girl’s name is Aisholpan, and she is the first woman in her family’s long lineage to take up the Kazakh tradition of eagle hunting. Just as you and I might’ve hoped, Bell needed to know more, and, despite his lack of feature-length doc experience, set out to capture the spirit of both the land and the girl that makes up that unforgettable picture.

With an unimaginably tiny crew with an even tinier batch of equipment, The Eagle Huntress surpasses what anyone could have imagined—everyone, except perhaps Aisholpan who for not a minute doubts her own destiny as a huntress and as a part of her ancestral tradition, not even blinking at the fact that the honor remained exclusively in the hands of the men.

At it’s very core, eagle-hunting entails unwavering courage, strength, and patience, qualities, that as far as the elders in her community are concerned, are possessed solely by men. It is easy then to believe that the act of catching a baby eagle, training it to obey only you as its master, and then wielding it as your source of weaponry in the harsh Mongolian wilderness called for testosterone, not the “fragility” of a woman, as one elder puts it.

Aisholpan, however, sees right through that. Better yet, fragility has never been part of her vocabulary as she’s always been drawn to the strength of nature rather than the procedures of cooking and cleaning that most Kazakh women take part in. This is largely thanks to her mother and father who never questioned her path down a different road, but in the end, we can only look to her unique tenacious spirit as the driving force to the mountains and to the Golden Eagle Festival where she will compete against 70 male eagle-hunting veterans.

We can then deduce The Eagle Huntress to a story of relationships. Whether between girl and father, girl and eagle, girl and nature, and, ultimately, girl and tradition, the idea of connectivity within her world is at constant play on Bell’s camera, and in often bewildering moments. There’s so much gratification in seeing Aisholpan and her father bond as she repels down a precarious mountain ledge to grab her new companion, but maybe not as much as when she simply grins in silence as a bunch of old men talk about her having no place in the tradition that they hold so dear. You don’t expect this to be a movie about payoff, but ca-ching!

While we can see that the usually timid community is unsure of being in front of a camera, and having to replay conversations for the sake of coverage makes some of the setups stiff, Bell’s incorporation of the Kazakh people is clever and even cheeky at times. The editing by Pierre Takal is a notable achievement as he establishes tension, thrill, and ultimately satisfaction in Aisholpan’s adventure. Cut with the narration by Star Wars’ Daisy Ridley further enhances a sense of determination that is well-suited between the two ass-kicking stars.

What makes that adventure unshakable, however, is the land in which she calls home. Bell knew, by looking at Svidenksy’s photo, that it was Aisholpan’s connection to the Mongolian tundra around her that would ensnare audiences, and so focused on how to capture it in all of its magnificent scope. His choice of cinematographer was then crucial, but also an easy one for him.

Simon Niblett, a long-time collaborator of Bell’s, would be the man for the job, and thank goodness for it. A camera and engineering nerd, Niblett fashioned special cranes and drones that would uniquely suit the environment, as well as GoPros fit for an eagle’s head for that coveted birds’ eye view.

As you might expect, wonder and awe overwhelm us as we watch our little hero traipse through her unforgiving playground, reacting with little worry but a blush of her cheek. It seems she was born with the knowledge that smiling at the bitter wind rather than shying away from it is what it takes to be The Eagle Huntress, and after seeing the elders’ faces when she brought her eagle to the side of the mountain, no one can argue with that.

THE EAGLE HUNTRESS opens at the following Laemmle Theatres in the greater Los Angeles area.