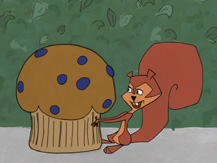 Every great filmmaker starts somewhere-and this may as well be the motto for UCLA‚s Shorttakes Film Festival, which hosts its 13th annual event on Thursday evening, May 25.

Started in 1992 by the University‚s Campus Events Commission as a means to highlight the works of aspiring filmmakers, the Fest now accepts submissions from not only UCLA students, but from students at film schools and Universities around the country. For example, this year‚s fest features projects from UCLA, Cal Arts, USC and New York University‚s Tisch School of the Arts.

This year‚s event ˆ which runs one-night only, starting at 7 p.m., in the Ackerman Grand Ballroom on UCLA‚s Westwood campus ˆ features the short films of 17 talented finalists (listed below), whose work, categorized as either film narrative or animated short, covers a wide array of topics.

The material presented in this year‚s short films is vast, and ranges from a satirical, behind-the-scenes look at the making of an al-Queda terror video (Usama) to a comedy about three buddies who kiss their moms goodbye and make the 19-mile trek to Las Vegas to focus on their budding music career (19 Miles to Vegas). All in all, the projects at this year‚s fest promise to be varied and entertaining, at best.

The films at the fest are judged by professionals in the industry. On-hand for judging this year are Academy Award-nominated Don Hertzfeldt, who, along with Mike Judge, produced The Animation Show; Producer Bob Dohrmann, who‚s had a successful couple of years with Mr. and Mrs. Smith and the critically lauded satire Thank You for Smoking; and Emmy Award-winning host (the popular „Survivor‰ series) and filmmaker Jeff Probst, among many others.

The 13th Annual UCLA Shorttakes Film Festival is a free event that is open to the public. For more information, visit www.campusevents.ucla.edu or call (310) 825-1958.

This year‚s finalists are divided into „Film Narrative‰ and „Animation‰ Categories. Please read on for summaries and director information on each film.

In this silent short film from director Chris Graue (undergraduate student, Pepperdine University), a tragic day in the life of the project‚s poignant protagonist is explored.

On the first day of spring in this film directed by Alex Reid (undergraduate student, UCLA), young lovers exalt the fruits of the earth and of their sacred love.

In this film, directed by Chris Yi (undergraduate student, UCLA), it only takes one missed call for Jenny‚s past to suddenly catch up with her.

In this short comedy directed by Shane Valdez and Regan Zajac (both undergraduate students at the University of Las Vegas, Nevada), three friends kiss their moms goodbye and move 19 miles away to Las Vegas to begin their music career.

Back of the Bus

In this moving film, directed by Diedre Couey (graduate student, USC), a mother of the Civil Rights movement makes a courageous stand that forever changes the nation.

In this whimsical film from director Meltem Tugal (undergraduate student, UCLA), there are fingers playing piano, painting and typing to classical music in black and white.

Directed by Tony Vallone (undergraduate student, UCLA), this film is about a young man‚s story of love and instant messenger.

This film, directed by Leslie Zak (undergraduate student, NYU‚s Tisch School of the Arts), presents a glimpse at a defining moment for a young girl: an almost-kidnapping on a family road trip that goes unnoticed.

Of Weight at Night

This film, directed by John Baek (undergraduate student, UCLA), breaks down and dissolves the image of the urban city.

On the day of the dead in this film, directed by Raul Cardenas-Rivera (graduate student, UCLA), all the skeleton kids come out of their graves to enjoy their offerings. But, a little skull boy is getting bored with tradition so he decides to go to the great city to find a new and scary way to celebrate.

The recipe for this alphabet soup contains clever ingredients, with catchy music thrown in for fun, in this upbeat film from director Meghann Artes (graduate student, UCLA Animation Workshop).

Native with a Camera

In this film, directed by Hank Friedmann and Scott Yacyshyn (both undergraduate students at UCLA), an ethnic warrior on a lush tropical island tries to film his pet tortoise.

In this cute film from director Emud Mokhberi (graduate student, UCLA School of Theater, Film and Television), a squirrel finds a deliciously giant muffin and is determined to take it.

When a stranger in this film, directed by David Badgerow (graduate student, UCLA), suddenly appears in a remote western town, one cowboy decides to give him the third degree?

In this film, directed by Deborah Shin (graduate student, Cal Arts), every person and every thing has its own wavelengths. Each wavelength is different but a wavelength can change to become more like the wavelength of someone you love.