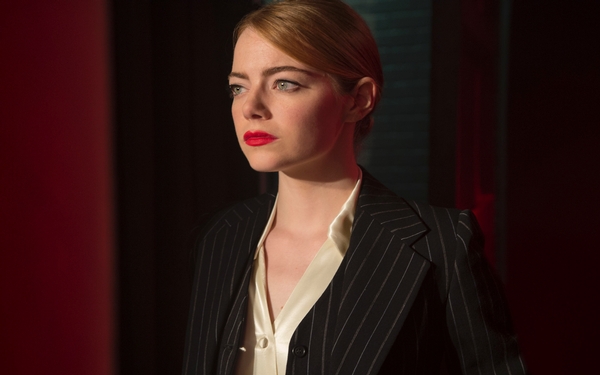 Emma Stone had no trouble relating to Mia Dolan, the character she plays in La La Land: a struggling young actress who moves to Hollywood from the Southwest, goes up for a hundred auditions, pumped with hope and dreams and fierce ambition, only to be met by rejection, indifference.

“It was really kind of a strange exercise,” Stone said with a laugh, recalling her own early days in Los Angeles (after moving there from Phoenix) and the way the starry-eyed Mia in Damien Chazelle’s altogether exhilarating new musical — yes, musical — goes through the same grueling, soul-crushing process.

“But it also reminds you that if you’re lucky, you’re getting frequent auditions as an actor,” Stone added. “Because it’s the periods when you’re not going in for auditions that are even worse — those long swaths of time when people aren’t even calling you. You’re just sitting in your apartment wondering what the hell you’re doing with your life.”

Stone, of course, does not have that problem now. Nominated for an Academy Award for her portrayal of the messed-up daughter of a messed-up movie star (Michael Keaton) in 2014’s “Birdman,” Stone also played the intrepid writer in the 2011 box office hit “The Help,” and was Gwen Stacy, Andrew Garfield’s love interest, in 2012’s “The Amazing Spider-Man” and its 2014 sequel. And if she isn’t nominated for a best actress Oscar for her literally soaring turn in “La La Land,” well, then, we may as well all go climb up a tree and never come down.

“La La Land” — which won the People’s Choice Award at the Toronto International Film Festival last month, and won Stone the best actress prize at the Venice Film Festival just before that — opens nationwide on Dec. 9. The film follows Stone’s character’s career arc, and her romantic arc, as Mia falls for a jazz-obsessed wise guy pianist played by Ryan Gosling. They spar. They swoon. They croon. They tap-dance in Griffith Park, Fred and Ginger-style.

Stone and Gosling had worked together twice before their irresistible collaboration in “La La Land” — in 2011’s “Crazy, Stupid, Love” and 2013’s “Gangster Squad.”

“It definitely helped — not needing to create a relationship from scratch, or figure the other person out,” Stone said on the phone from San Francisco, where a fighter jet suddenly went roaring past her hotel window. (“Yikes!”)

“I feel like I know Ryan, and I know what it’s like to work with him, so that simplifies everything,” she said. “You don’t have to work at creating a history.”

Instead, Stone and Gosling had to work with “So You Think You Can Dance” choreographer Mandy Moore, going through the rigorous steps and stages of elaborate dance numbers. Stone had spent her childhood doing musicals with Phoenix’s Valley Youth Theatre, but this was something altogether different, daunting.

“Oh, man,” she said. “We rehearsed for about two and a half months before we started shooting. We had to learn to tap-dance. And soft shoe. And the ballroom dancing, all of that … we were novices. We spent a long time just learning that kind of dance, and then eventually learning our numbers.”

And when Stone takes off her high heels and puts on her tap shoes on a bench in Griffith Park, where Gosling takes a Gene Kelly-esque spin around a street light and the two embark on “A Lovely Night” (one of the movie’s original songs, with lyrics by Benj Pasek and his writing partner Justin Paul), the moves in the funny, flirtatious song-and-dance duet are pretty swell.

“That was my favorite part, learning to tap-dance,” Stone said. “It’s like playing an instrument and dancing at the same time … . I don’t know that I’m the world’s greatest tap dancer, but I loved doing it.”

“La La Land” is, among other things, a celebration of movie history. Stone’s personal favorite film, the Charlie Chaplin silent classic “City Lights,” is referred to. There’s a scene where Mia, carless, late at night, walks down a deserted Hollywood street, past a mural of iconic images: Chaplin, Keaton, Marilyn Monroe, W.C. Fields. “Singing in the Rain” is one of “La La Land’s” touchstones. So, too, the lushly colored musicals of Frenchman Jacques Demy: “The Umbrellas of Cherbourg” and “The Young Girls of Rochefort.”

“I love the kind of nostalgia of a movie like ‘La La Land’ that harkens back to that time but also feels so modern,” Stone said. “We watched a lot of these reference films, and you realize that there’s so much (today) that has been inspired by these films, of course. But it’s also important that the acting and the storytelling feel modern in the midst of this glorious world that Damien’s creating, that so completely references the films of the past.

“So, it is important to me to know about that history. But I’ve also gotten stuck in traps where I’m like, ‘Nothing new can ever be what that film was,’ and I don’t think that that’s necessarily true. That can be fatal, to immerse yourself in tradition to the point where you’re not trying to create some new, exciting experience. You’re clinging to the past.”

But back to Stone’s own past, and those days when she was a teenager recently arrived in Los Angeles with her mom, trying out for sitcoms, for Disney Channel shows. Did the humiliation Mia endures in front of casting directors and casting director underlings in “La La Land” bring back memories?

“There was one that I remember, where I broke down crying in the audition. The casting director must have been going through her own drama — which I guess everybody does — but going through her own kind of weird experience, and she yelled at me … . It was just very confusing and upsetting, and I was 16, and I was just so overwhelmed being yelled at on camera in a room.

“But I think that the hardest ones, outside the experience of the time when I wasn’t even getting auditions, were the ones where you get really, really close to getting a part and all of a sudden you’re imagining your whole life, like, ‘Wow, maybe I’ll be on this TV show for seven years, and I’ll be getting paid steadily,’ and you have all these irrational — but not irrational, like understandable – dreams that sort of pop to the surface.

“And it’s like, ‘Oh, we’re finally allowed to really believe that this could happen.’ And then you don’t get it. Those ones were like particularly crushing.

“It’s like a relationship, where you pour everything into it and then you are like, ‘Oh, well, that’s not how it’s going to go.’”