Written For the Screen: 10 Films From the Writers Guild of America's 101 Greatest Screenplays 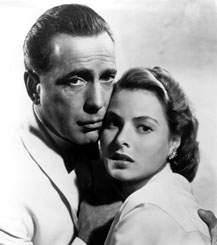 What do Casablanca, Groundhog Day, The Godfather and Sunset Blvd. have in common? Well, aside from the fact that they‚re all contemporary films, they‚re also all on the Writers Guild of America‚s list of 101 Greatest Screenplays ever written for the screen.

Compiled as a joint effort by the WGA West and WGA East starting in the summer of 2005, the list showcases, as a WGA press release states, „the finest achievements in film writing, as voted upon by professional film and television writers.‰ The finished list showcases films from the 1930s to present, many of which are Academy Award-winners. Some are blockbusters, some are obscure and some even have subtitles.

Kicking off the two-week program is a LACMA-themed night entitled „Bittersweet Romance in Cities of the Mind.‰ This double-feature begins at 7:30 p.m. with a showing of the 1942 classic Casablanca, which was directed by Michael Curtiz with a screenplay by Julius and Philip Epstein, and Howard Koch. Following the Humphrey Bogart-headlined film is Woody Allen‚s 1979 film Manhattan, which he wrote and directed, and which stars Diane Keaton and Meryl Streep. Casablanca was voted as the No. 1 film on the WGA‚s list, while Manhattan was ranked at No. 54.