There’s more to Liverpool than just The Beatles

By Jill Schensul - The Record (Hackensack) 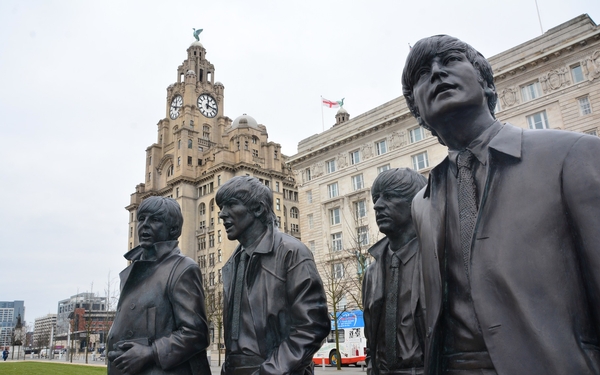 The Beatles and Liverpool are inextricably linked; they put this town on the map, and they’re still its biggest draw. No matter that the Beatles left their hometown more than 50 years ago in search of fame and fortune; a recent study found that the Fab Four connection brings in an average $103 million a year and keeps 2,300 locals employed in Beatles-related tourism.

But haven’t travelers been there, done that or at least read enough about it?

Isn’t it time we all moved on? Surely there is more to Liverpool than John, Paul, George and Ringo.

It took little digging to hit pay dirt on this question. Liverpool has been enjoying something of a renaissance in recent years, finally shaking off the poor image that came with economic decline, rising crime and city scandals.

Officials have worked hard to turn the image around since the 1990s, reinventing the city by emphasizing its culture and history. In 2004, the Liverpool waterfront was named a UNESCO World Heritage Site; a year later, the city was awarded the title of European Capital of Culture for 2008. New museums opened, piers were restored, the economy began cranking, and enthusiastic reviews from visitors began piling up.

Today, Liverpool boasts more museums, art galleries and historic buildings (2,500 buildings and 250 public monuments) than any city in Britain except London. Last year, it was named a UNESCO City of Music for the central role music plays in the life of the city — acknowledging not just the pop of the Beatles and other Mersey Beat bands, but other institutions, including the 175-year-old Liverpool Philharmonic.

Obviously, there is plenty to write about. “The Beatles Story” might still be the city’s most popular attraction, but there are plenty of other stories worth telling in this city along the River Mersey.

From my window of my fourth floor room at the Hope Hotel, I could see a lot of the skyline and important buildings — every place had an intriguing angle. For instance the city has two cathedrals, one at each end of Hope Street. The enormous Roman Catholic Metropolitan Cathedral of Christ the King is bright white and modern. At the other end of Hope Street is Liverpool Anglican Cathedral, built by the architect; Giles Gilbert Scott, who was 22 at the time he started the project in 1902 and later went on to give England its iconic red phone booths.

From our window, too, we could see the outlines of the city’s most iconic buildings, the Three Graces, as they’re known. Ornate and huge creations, the Royal Liver Building, the Cunard Building and the Port of Liverpool Building were built in the late 1800s, the city’s shipping heyday, and were symbols of Liverpool’s international prestige and commercial prowess. They came to define the city’s skyline and remain an anchor, shall we say, of the waterfront.

That waterfront is still bustling, now with visitors and locals and attractions. It’s the strategic place to start exploring the city. And, if you’re so inclined, a good spot for a selfie with the Fab Four; a life-size bronze of the Beatles was installed right on the waterfront opposite the Three Graces just last year.

Pier Head, as the waterfront site of the Three Graces is known, is also where you’ll find the Museum of Liverpool, the largest national museum built in Britain in more than a century.

You’ll probably notice the strange sculptures ensconced around the Museum of Liverpool — looking kind of like cows but somehow different. These are a breed special to Liverpool: the Superlambanana, a cross between a banana and a lamb — both common cargo at the city’s docks in the last century. The sculpture was originally designed by the artist Taro Chielo both as comment on the dangers of genetic engineering and also as a nod to the city’s history.

Liverpool has two actual docking areas, and next door to Pier Head is the Albert Dock, which when constructed in 1846 was itself a groundbreaking sort of pier architecture. Today, it is home to both the Merseyside Maritime Museum and the Tate Liverpool, established in 2008 as the northern outpost for the Tate’s collection of contemporary art. On the third floor of the Maritime Museum you will find — an indication of its significance in Liverpool’s history — the International Slavery Museum. There was, yes, a great deal of human cargo that went through this port in the 18th and 19th centuries.

On the way to the Tate, check out the candy store adjacent to it: There’s a portrait of the Beatles in Sgt. Pepper outfits — a mosaic of 15,000 jellybeans.

Leaving the waterfront, you have your pick of neighborhoods to explore and significant sites to see. We, of course, had to visit the Cavern neighborhood — Mathew Street in particular, where you’ll find not only a new Cavern Club (the original place The Beatles played burned down, but this place is also an actual cavern and the music played there is heartfelt as the original). All along Mathew Street, the music scene and night life are thriving. The 20-year-old music festival held on its streets every year has become so popular that it has been turned into the citywide Liverpool International Music Festival.

You can also stop in at the Grapes, a Beatles favorite that looks pretty much as it did when the boys hung out before or after a gig at the Cavern, which didn’t have a liquor license at the time.

There are photos all over the walls and ceiling of the Liverpool lads, their friends and other musicians. One of them shows the boys around at a table in one corner of a room off the main bar. The table is still there and the whole setting is the same; so I sat down, where John was sitting in the picture. I looked out at the place, trying to see what he would have seen.

I saw a place supposedly famous, but fairly empty that night. Just some older guys, gathered around the smoky bar, talking in the Scouse accent associated with Liverpool, which I couldn’t quite understand. The jukebox played “Brown-Eyed Girl,” and every so often a burst of laughter from the locals would eclipse Van Morrison.

Anywhere else, this scene would be different. Crowded, expensive, full of selfie-ing patrons and self-conscious conversations.

Liverpool goes its own way.

And in the end, it is the attitude of these people that I remember most.

The people of Liverpool have been voted the funniest and friendliest in the country. Don’t worry, you will meet them because that’s how the locals are.

And so I met a man without a home, on the steps of the Bombed Out Church (as it’s widely known, though its actual name is the Church of St. Luke). He wanted not a handout but for me to take his photo as he posed arms up and crooked into a wrestler’s victory pose — a fighter, not down, not out. And the manager of the Hope Hotel, who didn’t want to give me a public relations pitch or a “site inspection” tour of every room before I left, she just wanted to help me with my luggage and hand me a small guide to her city.

Or the station manager at Albert Dock, who asked where we wanted to go, then gave us his opinion on our day’s itinerary and then could barely restrain himself from leading us off himself.

OK, John, George Ringo, and Paul they’re not. But whether you go to Liverpool in search of Beatles or to dive into its cultural riches or even arrive as a fanatic for one of its two football teams, that tenacious Liverpudlian spirit is what will ultimately win you over, and be the reason you want to come back.

GETTING THERE: Liverpool is about two hours from London. If you don’t want to drive, trains leave regularly from London’s Euston Station, depositing you in the center of Liverpool. You don’t even have to go into London if you’re so inclined: Catch a flight into Manchester, 45 minutes from Liverpool, or take a domestic flight into Liverpool’s John Lennon Airport.

ACCOMMODATIONS: We really loved the Hope Street Hotel, a small, simple and well-situated establishment housed in what was once a manufacturing plant for Rolls-Royce carriages. It’s the place where many musicians stay when in Liverpool, the staff remains outgoing and helpful whether or not you’re a star. Info: hopestreethotel.co.uk.

DINING: Liverpool is full of inviting pubs – the Ropewalks area of town (where the rope-makers for ships were concentrated) is known for its particularly varied collection of pubs (and other night life): facebook.com/ropewalks/.

— Our digs at Hope Street were just a quick walk from what turned out to be my favorite place for a pint — not that I had time for much of a survey. I just fell in love with The Phil because it was John Lennon’s establishment of choice. The Philharmonic Dining Rooms, its official name, was built as a gentlemen’s club in 1898. The faculty of design at Liverpool University College was commissioned to do the interior, and the resulting rooms full of art nouveau, stained glass, chandeliers, carved fireplaces, and a legendarily swank men’s WC, are worth experiencing. Infonicholsonspubs.co.uk/restaurants/northwest/thephilharmonicdiningroomsliverpooloday

— Maggie May’s is considered another mecca of dining, serving up the best example of scouse, a dish revered and pretty much endemic to Liverpool. Scouse was introduced by Norwegian sailors who came to the port in the 19th century; the Norwegians called it labskause, their word for stew, and it soon became a common meal for the working class. The inexpensive meal was made with either mutton, lamb or beef with vegetables that were slow cooked to tenderize the meat. Scouse was so popular here that the word eventually was used to describe the local accent, and Liverpudlians eventually were called Scousers. And they’re proud of it.

Anyway, you’ll find scouse on many pub menus in Liverpool, but Maggie May’s is generally considered top of the scouse scene. Vegetarians don’t get left out in the cold, either. Ask for blind scouse, the meatless version. Info: maggiemaysoriginalscouse.co.uk.

—Albert Dock is where you’ll find a smorgasbord of restaurants and bars, galleries, and other cultural attractions. The dock has one section of the massive Beatles Story attraction (beatlesstory.com), housed in an underground warren of exhibits jammed with memorabilia; original instruments and letters; and re-creations of storefronts and sites important to Beatles history.

—Sprawled out in red brick with orange trim, you can’t miss the Tate Liverpool (w.tate.org.uk/visit/tate-liverpool), home to the Tate’s collection of modern art.

—Pier Head is home to the Three Graces, the Fab Four bronze, the Museum of Liverpool, the International Slavery Museum and a small herd of Superlambanana (the statues, no live ones). The other venue of the Beatles Story is on this section of waterfront along with a gift shop offering more than any Beatles fan could have dreamed of, there’s a 4-D movie about the Beatles, (who else?), a cafe, and temporary exhibits.

—The Cavern Club, on Mathew Street, has two stages and showcases live music every night. The club is also instrumental in supporting Beatles related activities, including the de rigueur Magical Mystery Tour, a two-hour bus tour leaving from Albert Dock and taking in the Beatles’ childhood homes and schools as well as places featured in the lyrics, like Penny Lane and Strawberry Fields. The tour finishes at the Cavern Club and includes admission to that night’s show. Info: cavernclub.org/the-magical-mystery-tour/.