Story of Detroit’s Walking Man, James Robertson, to be documentary 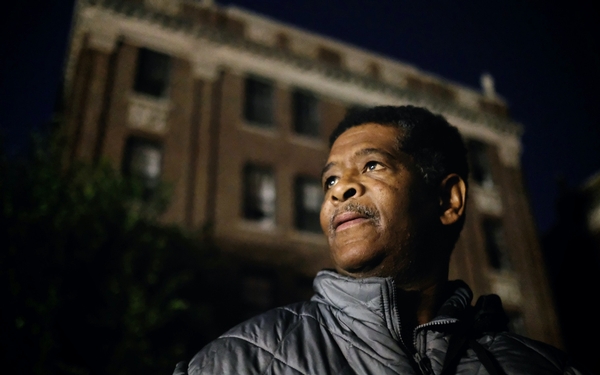 Have you heard of Walking Man?

He’s the factory worker who walked 21 miles to work — from a rooming house in Detroit to a suburban job and home again, day after day, because buses took him just part-way.

He’d arrive covered with snow or soaked with rain sometimes, his boss said. But James Robertson was never late, never absent, in a dozen years.

Hearing of his plight in the Free Press last year, so many people rallied to help Robertson — from around Detroit and across the country — that within a week he had gifts amounting to $360,000 and a new car.

Now, the story of the Walking Man is going from print to the screen. Robertson, 58, of Troy is to star in a documentary film that he hopes will make a difference in the November election.

It’s being produced by Detroiter Jean-Claude Lewis, who met Robertson last summer when Lewis coached a 55-plus baseball team they both play on. The two hope to get the documentary out soon, in time to have an effect on the Nov. 8 election, when voters in southeast Michigan will decide on a transit tax. To Robertson, that’s the big deal on the ballot.

“They should have this millage pass so people won’t have to go through what I did,” he said last week, standing on Woodward Avenue in Highland Park, steps away from his former path to work, and where some of the film’s footage has been shot.

Lewis, a former Navy videographer, has done a short film on Martin Luther King Jr. and other projects. He said he hopes the “Walking Man” film plays in community centers, libraries, city halls and club meetings, to spark discussion.

“Both James and I are in favor of voting yes for transportation,” said Lewis, 57, who lives in Detroit’s Corktown area. “I hope this movie will impel people to rethink this thing, that we do need mass transit here,” Lewis said.

Amid last year’s publicity, Robertson’s story became a symbol for all that’s wrong with Motor City transit: sky-high car insurance required of Detroiters, a need for low-income workers to reach distant jobs, and a checkered map of bus routes that leaves many stranded, especially those in suburbs not served by the suburban regional bus system known as SMART. Those suburbs include Rochester Hills, where Robertson punches in five and sometimes six days a week to run a plastic injection-molding machine.

Megan Owens, executive director of the nonprofit TRU — for Transportation Riders United — said it was “fabulous” to hear that Robertson was making a movie proclaiming support for the ballot measure. The measure would enact a 1.2-mill property tax to support a greatly expanded bus system in Wayne, Oakland, Macomb and Washtenaw counties. As part of the expansion, suburban communities whose leaders until now chose to “opt out” of the SMART bus system — such as Rochester Hills — would at last be part of a regional bus system. The proposal also would add rapid buses to major thoroughfares, making it feasible for commuters to match or beat the travel times they achieve in their private vehicles.

Last year, TRU gave Robertson the Face of Transit Award. Robertson, so dedicated to his afternoon factory shift that he skipped the presentation, had the Free Press stand in to receive the heavy glass award that now sits in his living room — over the large-screen TV perpetually tuned to Major League Baseball. A film on Robertson could be persuasive, Owens said.

“As I’ve gone throughout the region over the last year and a half and talked to people about transit, almost everyone recalls his story. And I do remember last year when Mr. Robertson did say, he’s just one, and there are thousands more like him. I think it’s fabulous if he’s got this filmmaker to help him share his ideas,” Owens said.

Director and cinematographer Brian Kruger is partnering on the film. Kruger, who doubles by day as a salesman for an auto supplier, is best known to film buffs as director of “Black and Blue: The story of Gerald Ford, Willis Ward and the 1934 Michigan-Georgia Tech Football Game.” The 57-minute film is in scores of Michigan schools, libraries and youth centers after the Battle Creek-based Kellogg Foundation decided it conveyed a vivid lesson for young Michiganders about the history of segregation, Kruger said. The film’s debut in 2011 earned a highlight by drama critic John Monaghan in the Free Press.

Kruger, 54, of Grosse Pointe, joined Robertson, Lewis and several assistants early one October night on Woodward Avenue in Highland Park to shoot scenes of Robertson foot-slogging in the same outfit he’d worn for the Free Press’ February 2015 article: slightly ragged red sweatpants, a well-worn gray vest/jacket with black sleeves, a knit cap and the same shoulder bag in which Robertson always lugged his snacks and a Mountain Dew.

“So far, we’ve shot him playing baseball in Hazel Park. And now we’re getting him walking on Woodward. We’re having fun,” Kruger said.

Documentaries are challenging when it comes to making money, he said.

“This movie I’m making for Jean-Claude. I met him, heard what he wanted to do, and I volunteered my time to help him,” Kruger said. But the duo is running up expenses, so they’re using the same technique that outstripped all expectations for Robertson — an online GoFundMe site.

A Google search with the terms “James Robertson movie” instantly brings up a GoFundMe page showing Lewis behind a movie camera as he films an interview with Blake Pollock, 48, of Rochester, the banker who brought Robertson’s story to the Free Press last year. Pollock said he’d been driving up and down Crooks Road in Rochester Hills and Troy almost daily and, after months of spotting Robertson trudging through all kinds of weather, finally pulled over, opened the door of his Chrysler 300 and offered the stranger a ride. Many rides later, the two had become close friends, Pollock said.

Pollock helped Robertson to choose an apartment and financial advisers who oversee Robertson’s donated nest egg, and he has brought to Robertson numerous offers of movies, television shows and books. The movie plugging a yes vote for the transit millage “is the first thing he’s wanted to do,” Pollock said.

The movie makers’ GoFundMe goal is to raise $12,000, which would finance the short documentary and also kick-start funding for a longer film, to be made next year, that would focus on Robertson’s character virtues — perseverance, punctuality, perfect attendance, loyalty and love of hard work.

As the fillmmakers and a small crew of assistants adjusted camera gear on Woodward Avenue recently, Robertson stood alone up a side street a stone’s throw away, looking exactly like the foot-slogger he used to be. Kruger called out to him.

Robertson began striding, wearing the same blank expression he said helped protect him from predators on his years of walking through high-crime areas. Half a minute later, that segment was done. Kruger turned to a reporter and chuckled.

Robertson grinned and turned to a reporter: “You know something, I’ve had a lot of practice, walking out here. Yes, I have.”