Trio of friends paddle from Alaska to Washington

By Craig Hill - The News Tribune 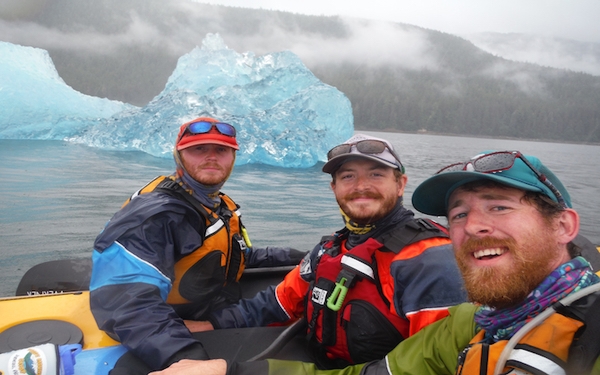 Kyle Cooper is no stranger to long kayak trips. He once took a 28-day island-hopping paddle in the San Juans, where he also leads youth on trips at the YMCA’s Camp Orkila.

So when the Olympia, Wash., resident heard about the Inside Passage, he knew it was something he had to try. In the summer of 2015 he pitched the idea to some friends and, after mulling it over, they decided that’s how they’d spend the summer of 2016. They would paddle nearly 1,000 nautical miles from Skagway, Alaska, to Orcas Island.

On June 17, they left Bellingham, Wash., on an Alaska Marine Highway ferry. Three days later they were in Skagway and ready to spend most of the next three months making the return trip by kayak.

“I have done the best to mitigate risk where I can,” Cooper said before the trip. “And yet, this will be a brand new and challenging experience for all of us. We will expect the unexpected. We couldn’t be more excited for this trip.”

The journey went just about as smoothly as they had hoped, thanks in part to months of planning. Cooper said preparations started in January. They studied maps, acquired gear and created meal plans.

Paddling the Inside Passage is a dream expedition for kayakers from around the world. The coastal route winds among island as it travels from Washington along British Columbia and into Alaska.

Many who actually attempt the journey mail food to stops along the way. Cooper said they decided instead to buy their supplies at the towns they visited.

At each town they bought enough food to get them to their next stop plus enough for a few extra days. Their longest stretch between towns was 11 days.

The men had to store their food in canisters because they were camping in bear country. Some stops were at designated campgrounds and others were in the wilderness, but only once did they encounter a bear.

They had just finished a 27-mile day and were setting up camp when they noticed a bear. Cooper said he didn’t get close enough to determine if it was a grizzly and they didn’t wait around to find out. They headed for the boats and paddled another 3 miles before re-establishing camp.

The bear likely wouldn’t have been impressed by the food selection. Favorite meals include chili macaroni and cheese and corned beef hash. But Cooper said they ate oatmeal almost every morning for breakfast. He typically topped his with peanut butter and jelly and said he still enjoyed the meal by the end of the trip.

The others were craving a little more variety. “Matt was super opposed to it (oatmeal) by the end,” Cooper said.

They splurged on burgers and poutine in town. All three had birthdays along the way and they saved beers to celebrate those occasions.

Summer is a popular time for other visitors in the Inside Passage. Massive cruise ships haul thousands of tourists to destinations such as Juneau, Ketchikan and Glacier Bay National Park.

Dwarfed by these behemoths, the kayakers kept their distance and stuck close to the safety of the shoreline. And when they saw these floating palaces in the distance, they never fantasized about being on board with the buffet meals, hot showers and comfortable beds.

“We were happy to be where we were,” he said.

Wildlife sightings were a daily occurrence. They saw sea otters and, by Cooper’s count, they saw humpback whales on 25 days.

Weather was usually overcast, but favored the men. Cooper says it rained hard on only five occasions, and only a few times was the sea whipped into a state choppy enough that they wished they were on shore. But none of the men capsized.

“We were very conservative with our risk management,” said Cooper. The men carried a personal locator beacon that they could use to send a distress signal in an emergency. They also used the device to notify friends and family of their progress throughout the trip.

The group paddled 15-18 miles most days and, depending on the wind, needed 6-8 hours to cover the distance.

“The trip was hard in ways I didn’t expect,” Cooper said. “When you spend all day on the water for that long it can be hard to keep your brain engaged.”

Still, the adventure was everything the men hoped. In fact, Cooper said, he wouldn’t mind going back. “I’d like to explore some of those places in more detail.”