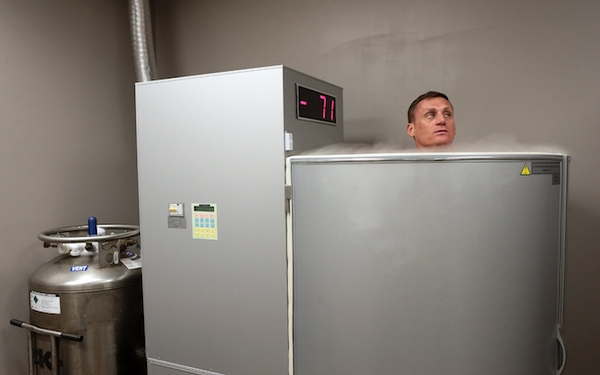 Spending up to three minutes in a subzero chamber doesn’t sound like something anyone would do willingly. But for those who use cryotherapy, it’s not about the dramatic drop in body temperature.

It’s about the rush that comes after it.

Cryotherapy involves using liquid nitrogen vapor to chill the air to temperatures ranging from -150 degrees to -300 degrees. The blood vessels constrict, shunting blood from the extremities and keeping it at the core, where it is enriched with oxygen, enzymes and nutrients. After the treatment, the nutrient-rich blood pushes back into the extremities.

Facilities offering whole-body cryotherapy are popping up across the country.

This cool trend and its many purported claims prompted the FDA this summer to release a consumer update stating that the agency has never cleared or approved the “cryosauna” devices as safe and effective in treating medical conditions.

“Given a growing interest from consumers in whole-body cryotherapy, the FDA has formally reviewed the medical literature available on this subject,” said Dr. Aaron Yustein with the FDA’s Center for Devices and Radiological Health. “We found very little evidence about its safety or effectiveness in treating the conditions for which it is being promoted.”

Though the therapy has not been rigorously studied, many swear by improved wellness. Several professional sports and college teams provide cryotherapy for their athletes, helping fuel its popularity.

St. Louis Blues forward Alexander Steen said he and a few other players use cryotherapy two or three times a week when they are in town to speed up recovery between practices. Steen, who is in his 12th NHL season, began using cryotherapy about two years ago and found it to be a quick and easy full-body treatment.

“The biggest benefits you feel are from doing it consistently,” Steen said. “It helps flush out the toxins and lactic acid and assists with inflammation.”

Georgia Wright, 71, says her severe sciatica nerve pain has been greatly reduced after using cryotherapy five times a week for the past month. She had gotten only temporary improvements with exercises, acupuncture and chiropractic care.

“I was giving up. I was nine months into sciatica issues, thinking it would be a chronic problem that would not go away,” Wright said. Now, she has cut way back on her nerve medication.

Nicole Shorez, 24, said cryotherapy has helped give her the energy to stick to an intense exercise regimen that involves two or three hours of daily workouts. After struggling with weight most her life, Shorez has lost 60 pounds since June.

“I will work out for two hours and be really tired,” she said. “I will go into cryotherapy, and I will be re-energized.”

The FDA also warned about the danger of asphyxiation. The nitrogen vapor lowers the amount of oxygen in the room, which can cause someone to lose consciousness. That is apparently what happened when a spa worker was found dead a year ago in Las Vegas after using the cryosauna alone. Other dangers include frostbite or eye injuries from the extreme temperatures.

At PALM Health, operators take each person’s blood pressure before using. Users keep on their undergarments and are given thick mittens, socks and waterproof booties to protect hands and feet. An operator stays in the room while the machine is in use.

PALM Health, which opened in May, is a wellness center that offers personalized preventive care and treatment plans that combine medical care with naturopathic, fitness, coaching, lifestyle and spa services.

Founder and CEO Dr. Lauren Munsch Dal Farra said cryotherapy was a natural fit. “We are working toward a more holistic approach in preventing and treating illness by finding therapies we can incorporate that are nonpharmacological and nonsurgical to support people in optimizing their well-being,” she said.

Dal Farra said she tried it herself over two years ago, using cryotherapy twice a week for eight weeks. She found it increased her mobility, reduced her joint pain and helped her recover from falling down the stairs and hurting her back.

Since offering cryotherapy to members at PALM Health, she’s found more people want to take the plunge than she anticipated. The center had to expand the cryosauna hours so it would be available daily from 9 a.m. to 6 p.m. “It’s always booked,” Dal Farra said.

Wright offers this advice for withstanding the even worse than Arctic temperatures: “You keep walking in place, going in turns, and talk. Talk about something that makes you feel good. And it’s over in 1, 2, 3.”