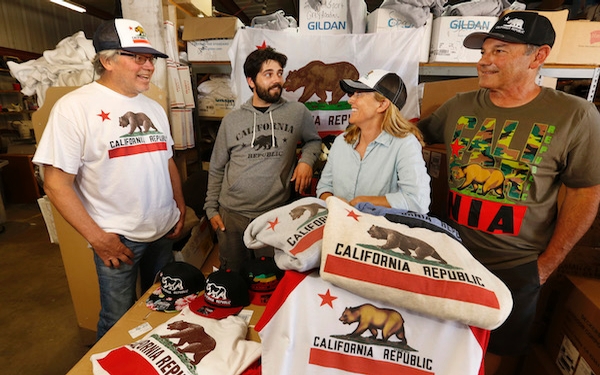 As often happens in the annals of California innovation, the story of how one of the state’s last grizzly bears came to be a global fashion icon begins in an 8-by-8 foot garage.

In the early 1980s, three young surfers — Kevin Greenwood, Mark Travis and Andrew Batty — set up shop in the Central Coast beach town of Cayucos, seeking to join forces in the T-shirt trade. They named their enterprise Dolphin Shirt. Co., decorating their apparel with images of orcas, sea lions and, yes, dolphins.

It was tough going at first: To purchase supplies, the partners often pooled their pocket change. In time, though, Dolphin Shirt expanded, first into a barn, and then to a small shop here near the railroad station.

“I noticed that animals were selling,” recalled Don Pimentel, a self-employed architect dabbling in T-shirt design. “I said, ‘Wow, I can do that.’”

In 1985 Pimentel painted a bear, working off an outline of the grizzly that marches across the California flag. He presented it to Dolphin and then headed to Hawaii.

While Pimentel was away, the partners expanded on his design. His rendition of the bear, with his signature found just below its rear, right paw, remained. But now a red star hovered over the bear’s snout and a bar ran across the bottom, underscoring the legend “California Republic.”

In short, the shirt makers had more or less replicated the California state flag, whose design is rooted in the banner of the so-called Bear Flag Revolt of 1846. They sold eight dozen shirts right off the bat.

Thirty years later, the no longer quite-so-young surfers — Greenwood gives his age as 59 and a half and three quarters — find themselves riding a fresh wave of global enthusiasm for all things California. The trend goes far beyond bear-flag themed T-shirts and related knick-knacks and spin-offs.

“California as a brand is incredibly valuable overseas,” said economist Kevin Klowden, who directs the Milken Institute’s California Center in Santa Monica. “It probably does better outside the state than inside.”

He sees it in the explosion of Chinese direct investment in California, which, according to a California Center study released earlier this year, grew from $100 million in 2005 to $9 billion in 2015.

He sees it in all manner of foreign investors seeking to secure a piece of California real estate, or agriculture, or Silicon Valley innovation.

While beaches, movie stars and beautiful mountains don’t hurt, this does not seem to be about the realities of California — see gridlock, gang crime, sprawl, gaping income disparities, soaring rent, overtaxed water supplies — but rather about the idea of California.

Economic and design experts note that the phrase “designed in California” now trumps the notion of made in California. They point to the message Apple inserts into boxes that carry its phones to consumers worldwide: “Designed by Apple in California.”

Simon Sadler, a UC Davis professor of architecture and urban history, described the phenomenon a few years back in Bolt, the UC Press e-magazine: “Even when California design offers little more than an ersatz commonwealth through consumption, it arrives in the market accompanied by the hope of something more than another consumer fetish.”

“California design,” he continued, “promises to do something, to enable its subjects to attain a better and more replete future. Over-wrought though that might seem, the beautiful (Apple) boxes shipping from California contain this covenant, illusory or real.”

As do products brandishing variations on the California bear flag motif.

That the flag of the short-lived California Republic would become shorthand for cool contains a double dip of irony. While the 1846 uprising by American settlers in what was then a part of Mexico has its defenders, it more often is mocked in the history books.

Some historians have presented it as political intrigue, a plot meant to deliver Alta California into American rule. Others paint it as the work of a mob.

In any event, on June 14, 1846, about three dozen men, usually described as a mix of settlers, trappers and adventurers, entered Sonoma, which historian Bernard DeVoto described as “a tiny little cluster of adobe houses (that) could have been captured by Tom Sawyer and Huck Finn.”

This “chance crowd of marauders,” as the philosopher Josiah Royce called them, sent their leaders into the home of Gen. Mariano Vallejo, a prominent Alta Californian who happened to favor independence from Mexico.

Mystified as to why these conquerors were demanding to negotiate Mexico’s surrender with him, Vallejo offered them his liquor.

When successive negotiators failed to emerge, the anxious band outside sent in one more replacement.

“He found most of the conferees too far gone for business,” wrote historian Robert Glass Cleland. “Vallejo’s wine and aguardiente, taken on empty stomachs, had proved almost too much for the American commissioners.”

Eventually, terms were drafted and the band escorted Vallejo and two companions to Sutter’s Fort.

The invading party took to writing lofty proclamations about God and freedom and creating a proper flag.

William Todd, nephew of Mary Todd Lincoln, took up the latter project with, as DeVoto noted, “women’s patriotism assisting him. The wife of one revolutionist sacrificed a chemise and the wife of another one a petticoat, and Todd made a flag.”

It included a crude rendering of what Todd called a grizzly bear, but which at least one in the conquering party mistook for a hog.

The women’s underthings were cut into a red star and a stripe, over which Todd wrote in ink and berry juice “California Republic.”

The flag would fly over Sonoma for less than a month. When word reached the Bear Flaggers, as they were called, that the United States had gone to war with Mexico they replaced the banner with the Stars and Stripes. And so ended the California Republic.

In 1889, William Randolph Hearst, publisher of the San Francisco Examiner, aka Monarch of the Dailies, assigned a reporter to determine if there were any wild grizzlies left in California. After much effort, and with the help of many hirelings, the reporter finally captured a grizzly outside Ojai.

At first a public sensation, the poor bear spent the next 20 years caged in San Francisco zoos, growing old and mangy before dwindling audiences. It died in 1912, and its pelt was stuffed and put on display.

Forty years later the bear, dubbed Monarch, received a rebirth: The bear flag had been named the official state flag in 1911, but there were many variations, based loosely on Todd’s original, which was lost in San Francisco’s 1906 earthquake and fire.

In 1953, under Gov. Earl Warren, the design of the flag was codified. An artist used the stuffed Monarch as a model in drawing the grizzly that now prowls, defiant and free, across the California state flag — and countless T-shirts, caps, coffee mugs, clutch bags, socks and door mats.

Unlike the Confederate flag, which still stirs controversy given its national context, the California flag has become all but untethered from its history. Only rarely do critics arise to voice complaints about its origins.

“It has become,” said Stuart Kendall, associate professor of design at the California College of the Arts, “a free-floating signifier.”

What it signifies is not an awkward affair from California’s past, but rather all that California has come to represent: counter-culture, surfers, a nation-state, movies, Silicon Valley, fine wine (conquerors imbibe wisely), second chances, personal renewal and all the rest wrapped up in that ball of glittering wax known as the California Dream.

Of course, state history and free-floating signifiers weren’t exactly front of mind among the Dolphin partners when they first contemplated putting the California flag on T-shirts. They weren’t even sure if it was legal.

“This was 30 years ago and we were kids,” recalled Pimentel, reached by telephone on his Oregon ranch. “Now we would know who to call, but back then these guys were surfers doing silk screen on the side. Back then, it was more like,” and here he began to mimic the slow cadence of a teen slacker:

Chris Provensen, now 67, was freshly arrived from Idaho when he spotted one of the bear flag shirts hanging in the Dolphin shop. I can sell those, he announced. So he hit the road, visiting surf shops up and down the coast, sleeping in his vintage Volvo.

“I hardly had any money,” he recalled. “I just got out there. It was such an iconic, great design. And we were virtually the only guys out there then.

He ventured to Sacramento and opened an account with a Capitol shop. State officials would buy the shirts as gifts for visiting dignitaries. The Dolphin partners figured they need not worry about and trademark restrictions.

In fact, in most cases, state names and flags are in the public domain. Still, said UCLA law professor Kal Raustiala, “there isn’t an easy yes-or-no answer to the question of whether you can trademark the bear or something like that.”

In the end, given the fashion trade’s knock-off culture, and the difficulties inherent in chasing down and litigating against copycats, especially when they are overseas, the trademark question in some cases can become all but moot.

“Yeah, it is frustrating,” said Willie Travis. A second-generation participant in the family business, he helped launch the company’s website a couple of years ago.

He has seen new products copied and offered for sale by other firms in a single day. A design that splits and vertically stacks the word Cali/For/Nia is an especially frequent target of international knock-off artists.

But in the end, he said, looking for the bright side, “all the knock-offs do is contribute to brand awareness.”

The company, which now operates a small plant near the San Luis Obispo airport and a single retail outlet in Morro Bay, has scaled back from the 1990s, when its sea creature line was at its hottest. The decline in tourism after the 9/11 attacks in 2001, the Great Recession of 2008, and the closure of textile mills in the southeastern United States all took a toll.

The focus is now more firmly on the California line.

“I can’t tell you when or why it happened,” Martie Travis, wife of one of the co-founders and now a company manager, said of the upsurge of demand for California bear flag-related product. “But I don’t think it’s going to go away.”

Pimentel, who receives a 50-cent royalty on each sale of a shirt bearing his original, double from what he made in the early days, has his own theory about the appeal of the California bear flag.

And to those who would suggest that the mystique it is selling might be a mirage, a myth: Well, what could be more Californian than that?