Theatre Flamenco of San Francisco to perform at Wilshire Ebell 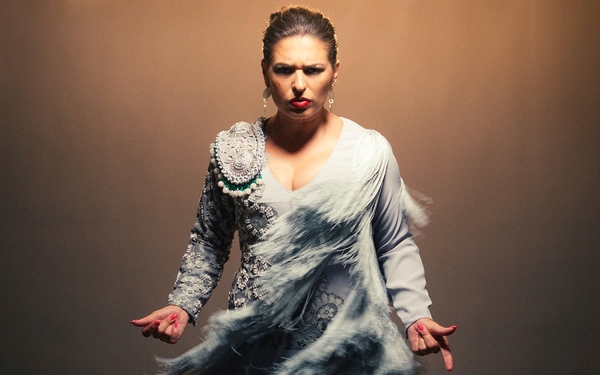 Theatre Flamenco of San Francisco, one of California’s oldest and most prolific dance companies, will celebrate its 50th anniversary season with a performance of the special production, El Latir del Tiempo/The Beat of Time on Saturday, November 12, 2016 at 8 p.m. at the Wilshire Ebell Theatre, 4401 West 8th Street in Los Angeles, CA. For tickets, please visit Kala Entertainment.

Featuring the traditional color, passion and character that distinguish the art of flamenco, Theatre Flamenco will celebrate its 50th Anniversary by presenting some of the world’s most renowned artists from Spain. These include: dancer Pastora Galván, one of the top international stars of flamenco, who made her professional debut with Theatre Flamenco at the age of 15; and flamenco singer Juana la del Pipa, who hails from a dynasty of artists from the flamenco cradle of Jerez de la Frontera in Southern Spain. Also invited is San Francisco native and accomplished flamenco dancer, Cristina Hall. Now residing in Seville, Spain, Hall is one of the few American-born artists to have established a successful flamenco career in Spain.

El Latir del Tiempo/The Beat of Time will feature reprised and new works choreographed by Mexican-born Carola Zertuche, artistic director of Theatre Flamenco. Along with the five-decade landmark for the dance company, Zertuche is also celebrating her 10th anniversary at the helm of Theatre Flamenco. She herself is a world-acclaimed performer, whose productions have been called some of the most innovative programs staged in California.

About the Artists for El Latir del Tiempo/The Beat of Time:

Carola Zertuche: As artistic director of Theatre Flamenco, Carola Zertuche has worked to forge artistic collaborations with international and local artists in productions that pay homage to traditional styles of flamenco, while also embracing and showcasing new, modern, and even avant-garde approaches to the art form. The results have been some of the most innovative, intriguing, and professional flamenco productions ever staged in California.

Zertuche has toured throughout Mexico, the United States, and the Middle East with highly revered flamenco companies, including Maria Benitez Teatro Flamenco. She has danced in important American venues such as the Joyce Theatre in New York, the Jacob’s Pillow Dance Festival in Western Massachusetts, the Lensic in Santa Fe, the Tablao Flamenco in Albuquerque, and the Fox Theatre in Atlanta. Zertuche received an Individual nomination for the prestigious Isadora Dance Award (“Izzies”) in 2002 for the performance Solea.

Pastora Galván: When she was just 15 years old, Pastora Galván traveled from her home in Seville, Spain, to San Francisco to make her professional debut with Theatre Flamenco. She has also performed in Los Angeles, and she was a special guest artist for the 2006 Flamenco Arts Festival in Santa Barbara.  Since that time, she has become one of the most sought-after flamenco dancers in the world. She comes from a family of highly-respected flamenco dancers, including her father, Jose Galván, and her brother, Israel Galván. During her professional career, Pastora has worked with some of the world’s most famous flamenco artists, including Antonio Canales, Eva Yerbabuena, Fernando Terremoto and Esperanza Fernández.

Juana la del Pipa: Juana la del Pipa was born 60 years ago in El Barrio de Santiago in Jerez de la Frontera, considered a cradle of flamenco in Andalucia, Spain.  She is known for her impassioned interpretations of the Jerez-style cante (song). Juana has been singing with her nephew, celebrated dancer Antonio el Pipa, for the last 10 years. Before that, she worked with Manuel Morao's company, touring with him to New York City for the production of "Gypsy Passion" on Broadway in 1990, as well as in festivals throughout Europe and the U.S. She was featured in the "Gypsy Caravan" North American tours in 1999 and 2001, and appears in the 2006 film "When the Road Bends: Tales of a Gypsy Caravan," which documented the tours. In the film review by the New York Times, Juana was described as "an epic-size woman who could have been conjured by Pedro Almodóvar." She is one of the three female voices on the recording "Mujerez," along with La Macanita and Dolores Agujetas, and has performed all over Spain and Europe with the ensemble. Juana was also special guest artist with Pastora Galván’s production entitled &dentidades in 2015, which toured throughout Spain, Europe, and North America.

Theatre Flamenco (http://www.theatreflamenco.org) of San Francisco is the second oldest dance company in San Francisco (after the San Francisco  Ballet) and one of the oldest in California. Founded in 1966 by Adela Clara, Theatre Flamenco was conceived during a flowering of cultural pride in the ‘60’s that led to the revival of Latino arts. The Company’s purpose was to fill what was then a dearth of Spanish dances in the San Francisco Bay Area. Theatre Flamenco was the first American dance company to stage full productions of Spanish dance in the U.S. Its productions showcase premiere national and international talent, vivid dance imagery, and flamenco’s living lineage in order to enchant audiences and ignite a passionate response. Every year since its inception, Theatre Flamenco has presented a home season of performances in San Francisco. The dance company also has an annual touring schedule and presents a quarterly community outreach series. Maintaining strong ties to the traditional dance communities of Spain, Theatre Flamenco uses a traditional yet innovative approach to flamenco to enrich and inspire the art community and general public, and to teach and mentor younger generations. Miguel Santos was the artistic director of the company from 1967 to 2006.