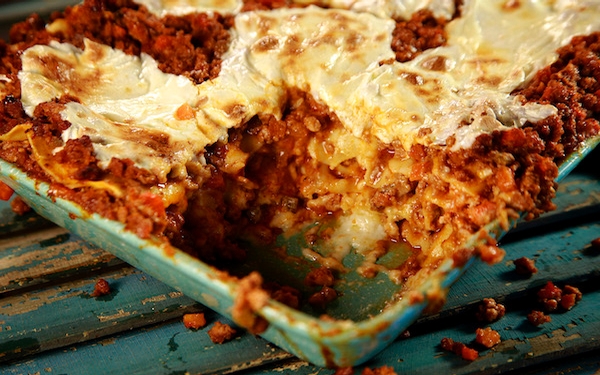 You may be familiar with Anthony Bourdain, the foul-mouthed, sharp-tongued world traveler, chef and TV host who slurped noodles with President Obama in Hanoi. But do you know Anthony Bourdain, the Tolstoy-quoting dad? Bourdain is out with a new cookbook called “Appetites,” and in it is his version of family life — with no-nonsense commentary and recipes for his favorite dishes to make at home, as a dad. This is Bourdain like you’ve never seen him (literally, there is one photo of him sitting on a toilet, eating a sausage and peppers sandwich). We caught up with Bourdain to talk about the book, his thoughts on the evil club sandwich and his distaste for Asian fusion.

It’s been 10 years since you wrote a cookbook. Why this book now?  I think it’s a reflection of the fact that I’d never done anything useful as far as my writing. I thought I’d write a useful cookbook. I thought I’d bring to bear 30 years of professional experience, where my cooking life, for the better part of a decade, revolved around cooking for a little girl and her friends. I noticed some advantages and pathologies that I suffer from when cooking for a little girl and her friends, and thought I’d write it all down.

You say it’s not for those looking for culinary genius. Who’s your target audience?  It’s a home cookbook for dysfunctional families everywhere. It’s written in a way that I hope gives you reasonable experiences and presents you with the kinds of compromises that professionals have to make all the time. I use risotto as an example. Do you really want to make risotto to order when you have eight guests sitting there? No. It won’t work. Most cookbooks won’t tell you that. They will say make it and it will come out perfectly. They should tell you you’re probably going to screw it up the first 10 times you make it.

Talk about the style of the book. These are not pretty food photos. What was the thinking behind that?  I didn’t want food that looked unapproachable or ridiculously beautiful. At the end of a dinner at my house, my kitchen sink is filled with dishes and there’s nothing pretty about the garbage. Halfway through dinner, there’s going to be wine spilled, and that’s a happy meal. It’s not this pristine experience. I’m done with that. I wanted it to look like real cooking in someone’s real home or just so out-of-there bizarre that it would be fun. I wanted it to look like no one else’s cookbook. I gave the photographer license to kill. I said, “Whatever everyone else has asked you to do or never let you do, and let’s do that.” My family is very far from normal and I sort of wanted to reflect that as well.

What’s going on with Eric Ripert looking very uncomfortable, with gravy dribbling down his chin?  He has no understanding of biscuits and gravy. I fed it to him the first time when we were on tour, and the guy just didn’t know what to do with it. It made no sense to his French brain. That’s the way he looks when he took his first bite — I wanted to capture it again. Of course I love the dish. You know, he’s French, so he’s confused.

What are the one or two recipes in the book you can’t stop making or eating?  I do the meatball recipe a lot. I think the army stew probably too. It’s the most useful dish because it was born out of necessity and poverty and any idiot can make it in 20 minutes on a hot plate. It’s cheap and uses readily available commercial ingredients. And it’s delicious. It should be the great American dish — perfect late-night stoner dorm food for college kids on a budget.

You say in the book you’re a serious egg lover. Anything else you’re willing to admit that kind of love for?  Cheese. My love of soft, runny cheese — it’s impossible to resist. A good, stinky French cheese or a good Stilton. These are things I really, really love. Dessert I can obviously live without.

Why a section on burger rules from Dr. Nathan Myhrvold but no burger recipes? Are the rules more important than any recipe could be?  The ingredients of a hamburger seldom vary. It’s a percentage of fat to lean meat, add salt and prepare and that’s it. It shouldn’t need a recipe. It’s a structural, textural question that people seem to get wrong so often. So that’s why we enlisted Dr. Myhrvold to look at this question. What is the best burger as far as an eating experience and balance? After considerable research, we kind of arrived at the same place: a structurally sound burger held together by commercially available cheese. We looked at the bun question. I’m a big proponent for the potato bun. I feel strongly that adding a brioche bun or some thick-cut bacon is not necessarily making that experience better. America’s most beloved burgers are not the $29.95 black label burger, or however much that costs at Minetta Tavern. Which is a great burger, but not something you want to create in your home. A burger is something anyone can do, just follow the rules.

You compare the club sandwich to al-Qaida. Any other food or food trend you can’t stand?  I’m really irritated by that useless middle slice of bread on the club sandwich. It’s been there forever; it’s not a trend. It’s lasted for decades and why, when we can so easily dispense with it? I can’t get too angry about pumpkin spice because hopefully that will all be over soon, if it isn’t already. The misuse of the word Kobe. There’s an absolute relationship between the number of douches in any given establishment and the appearance of a Kobe burger, Kobe meatballs or sliders on the menu. You can be positive you’re going to get some gel-headed bros high-fiving at the bar. I love bacon, but I don’t think we need it on everything. I think there’s a tendency to over-jack and over-umami food these days. Really annoys me any time I see Asian fusion too. Asia is a big place; which Asian are you talking about? You notice it’s never Uzbek or Tajik food. It’s Thai, and it’s generally insulting.

1. In a medium, heavy-bottom saucepan, heat the butter over medium heat until it foams and subsides. Whisk in the flour and stir it well using a wooden spoon, incorporating it into the butter until a dry paste forms (a roux). Reduce the heat and continue to cook and stir, taking care not to let the mixture brown.

2. Meanwhile, in a large saucepan, bring the milk to a simmer, then gradually whisk it into the pan with the roux, continuing to whisk until the mixture is smooth. Season with ½ teaspoon salt and a pinch of pepper, or to taste, along with the nutmeg, if using. Continue to cook over medium-low heat, stirring regularly, until the sauce is thick enough to coat the back of a wooden spoon, about 10 minutes. This makes about 4 cups bechamel.

1. To make the Bolognese sauce, in a medium, heavy-bottom pot, heat 2 tablespoons oil over medium-high heat. Add the onion, carrots, celery, garlic and thyme and season with 1/2 teaspoon salt and several grinds of pepper, or to taste. Cook, stirring regularly using a wooden spoon, until the vegetables are tender and have released their juices, 7 to 9 minutes. Stir in the livers and cook over high heat for 2 minutes, then add the beef, veal and pork, stirring and breaking up over high heat. Season with 1 teaspoon salt and several grinds pepper, or to taste. Continue to cook over high heat until the meat is brown, stirring regularly and scraping the bottom of the pan as necessary to keep the meat and vegetables from scorching.

2. Once the meat is browned, stir in the tomato paste over medium heat. Cook for about 20 minutes, stirring regularly, to marry the flavors. Add the wine, bring to a boil and cook until the wine is reduced by half, then add the milk and bay leaves and bring to a boil. Reduce the heat to a simmer and cook for 1 1/2 to 2 hours, stirring occasionally. You may need to add a bit of water (or chicken or veal stock, if you have it) to thin the sauce if it thickens too much.

3. Taste the sauce and season with 1 teaspoon salt and several grinds of pepper, or as needed. Remove from heat and stir to release the steam and allow it to cool slightly. Skim the fat off the top with a ladle and discard.

6. Place the baking dish on a foil-lined sheet pan and bake in the oven until the lasagna is browned on top and beginning to bubble, about 50 minutes. Remove and set aside to cool. If you must serve it the day you’ve made it, set it aside to rest for 15 minutes before slicing. For best results, allow the lasagna to cool completely and refrigerate overnight. The next day, reheat at 350 degrees, covered loosely with foil, until bubbling. Remove from heat and rest 20 minutes before serving.

Note: Adapted from a recipe in “Appetites: A Cookbook” by Anthony Bourdain.