Seth Meyers cracked scathing jokes about a Trump presidency in 2011 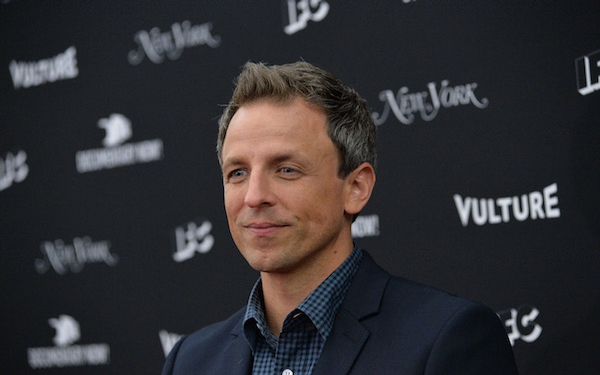 One of the prevailing stories of the bizarre, acrimonious 2016 presidential campaign is how so many media personalities have been participants in, rather than mere observers of, the drama.

There is, of course, Fox News personality Megyn Kelly, whose feud with Donald Trump has helped turn her into an unlikely quasi-feminist hero, and Billy Bush, whose crass banter with Trump back in 2005 got him canned from his job at “Today.” There’s former CNN contributor and Democratic operative Donna Brazile, who leaked debate questions to Hillary Clinton’s campaign. And there’s Trump campaign manager Corey Lewandowski, who went from allegedly assaulting a journalist on the campaign trail to punditry on CNN (he resigned from the news network on Friday).

But there’s also another media figure whose influential role in this election has been somewhat overlooked: Seth Meyers.

In May 2011, Meyers, then-head writer on “Saturday Night Live” and anchor of “SNL’s” “Weekend Update,” hosted the White House Correspondents’ Dinner, a frivolous schmoozefest that would go on to take huge historical importance — in more ways than one.

The dinner, at which Meyers joked about the whereabouts of Osama bin Laden, unfolded as SEAL Team Six was preparing the raid that would kill the terrorist mastermind the next day. But in a wrinkle that could ultimately have a more profound effect on American life, it also laid the groundwork for the bitterly divisive campaign between Trump and Clinton.

At the time, Trump’s political profile was on the rise thanks to his status as an outspoken birther, and he’d been toying with the idea of a 2012 presidential run. He was a guest — and the butt of many a joke — at the annual celebration, attended by power players from the world of media, showbiz and politics.

Several sources, including the New York Times, “Frontline” and the New Yorker, have cited the dinner as a turning point that inspired Trump, roasted before the Washington elite, to run for the White House.

Though much has been made of President Barack Obama’s cutting remarks at the dinner — he sarcastically suggested that the difficult decisions Trump had to make as host of “The Celebrity Apprentice” would prepare him for the presidency — Meyers was even more scathing in his set.

“Donald Trump has been saying that he’ll run for president as a Republican, which is surprising, since I just assumed he was running as a joke,” Meyers said as Trump looked on, grim-faced, still and plainly unamused.

“Gary Busey said recently that Donald Trump would make a great president,” Meyers continued. “Of course, he said the same thing about an old rusty birdcage he found.”

Five and half years later, Meyers’ remarks now seem uncomfortably prescient, reflecting the bewilderment of the 60 million or so Americans who voted for Clinton last week, many of whom considered the idea of a Trump presidency too ludicrous to contemplate.

While that reality, first imagined in an episode of “The Simpsons,” is still sinking in, Meyers has already positioned himself as one of late night’s most outspoken Trump adversaries.

When the comedian took over the reins at “Late Night” two years ago, he was seen as a solid, if not particularly groundbreaking, choice for the job. A well-liked “SNL” veteran, he was comfortable telling timely jokes from behind a desk, but he was also the umpteenth white, male host in the deeply homogeneous world of late night.

But over the course of the long campaign, Meyers established himself as an essential voice in an overcrowded field of topical comedy, largely through his signature segment, “A Closer Look,” a humorous analysis of subjects in the news that clearly draws from the Jon Stewart-era “Daily Show.”

While others, like “Daily Show” alums Samantha Bee and John Oliver, have used their more permissive cable-TV berths as launching pads for left-leaning comedy, Meyers has managed to do so on network television, bucking the unspoken expectation that broadcast late-night hosts should be nonpartisan. (So has Stephen Colbert on “The Late Show,” though after “The Colbert Report,” his political perspective was never exactly a secret.)

Meyers has been a vocal critic of Trump’s, bluntly accusing the Republican of bigotry and misogyny and even banning Trump from “Late Night” after he exiled the Washington Post from his campaign events. (It was a mostly symbolic gesture, since Trump wasn’t actually scheduled to appear on the show.)

That he’s done so at NBC, the network that propelled Trump to new heights of fame via “The Apprentice,” kept him on the air at the height of the birther flap and invited him to host “SNL” last year — in a first for an active presidential candidate — seems especially remarkable.

His pointed critiques contrast starkly with the get-along approach favored by his 30 Rock neighbor and former “SNL” alum Jimmy Fallon, whose jovial mussing of Trump’s hair has, to some more reactionary critics, made him late night’s answer to Neville Chamberlain.

Meyers has softened the smart alecky “Really!?” persona he deployed on “Weekend Update” in favor of a more earnest demeanor. On Wednesday’s show, a visibly emotional Meyers presented himself as a late-night ally to groups who feel threatened by Trump.

“As a white man, I also know that any emotions are likely a fraction of those being felt by the LGBT community, African Americans, Hispanic Americans, Muslim Americans, any number of the immigrant communities so vital to our country,” he said. “So hopefully, the Trump administration and Trump supporters will be compassionate to them. Because they need your compassion.”

He also tearfully acknowledged the historical milestone that many had hoped to reach with a Clinton victory, particularly his mother: “She was really excited yesterday. And I was really sad for her.” And he extended an olive branch to Trump supporters, saying he hoped the president-elect would live up to their expectations.

“That feeling you’re feeling right now? Black people have been feeling forever,” said Ruffin, who is black. “Join the fun.”

The segment played up the idea of the shared sense of alienation between white Clinton supporters and black people. (Ironically, a similar idea was at the center of an insightful “Black Jeopardy” sketch on “SNL,” only it featured a Trump supporter rather than Clinton fans.)

If Meyers played a small, unintentional part in bringing about a Trump presidency, his inclusive style of comedy may be just the thing to help many Americans navigate through it.