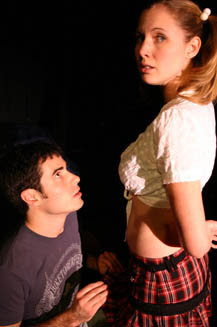 The lines between fantasy and reality blur in a kinky, tragic relationship in 'Stitching,' billed as a U.S. premiere now running at the Ark Theatre. Playwright Anthony Neilson relays some fascinating ideas, some interesting topics of conversation and some bizarre imagery, which may intrigue certain audiences while disgusting others. Some of the plot is choppy and frenetic, likely meant to play into the audience's confusion as to what is actually going on and in whose world.

The cast of two, Dan Roach and Lindsay Lauren Wray, have their work cut out for them. The challenge lies in building a relationship clear to each other, yet unclear to the viewer, at least until the peculiar ending. The love-hate bond between the two lovers must be so strong that the trauma and instability that hinders them can believably be bared and tested. We need to see what makes these lovers love and what holds them together.

The challenge is not fully realized by the actors. A rehearsed appearance stifles the growth of the characters and keeps us from believing this relationship is real. The question can be asked at any point throughout the play, “What the hell attracts these outcasts to each other and why would they fall in love?”

The back-and-forth bickering between the two grows slightly monotonous. Perhaps a chance to laugh at themselves and each other could not only help legitimize the relationship, but could also draw more sympathy.

The play itself fascinates and results in discussions that will continue well after the curtain call. Another alluring quality is the very same performance could translate differently to separate members of the same audience.

As it stands, the script could have been created simply for shock value. However, there are compelling segments that cannot be squawked at. This piece ought to be seen, at least for the value of the writing itself.

Morbidity, sexiness, tantalization, provocativeness, disgust and sadness all make up this memorable, if not believable, journey. So, what are you waiting for? GET UP AND GET OUT!