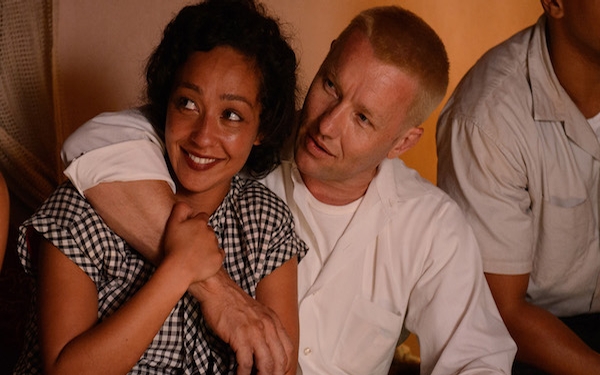 One of the most talked about films of the season, the racially charged romance “Loving,” tells the true story of a couple imprisoned for their illegal marriage. Mildred Jeter, who was black, wed Richard Loving, who was white, in Virginia in June 1958.

They were arrested weeks later, when local police burst into their bedroom. Their crime? Violating the state’s Racial Integrity Act.

Both were thrown in jail, but Richard, being white, got out first. Then, even though he was her husband, he was not allowed to bail Mildred out. Her father had to do it.

The Lovings were forced to leave their home in Virginia and move to Washington. It took nine years until Mildred got Attorney General Robert F. Kennedy and his Justice Department to take the couple’s case to the Supreme Court, where Virginia’s marriage segregation law was finally overturned on a unanimous decision.

We spoke with Joel Edgerton, the Australian actor who plays Richard, at the Toronto International Film Festival in September, about the man he plays and the movie.

Directed by Jeff Nichols and costarring Ruth Negga, who’s brilliant as Mildred, Edgerton said shooting on location in Virginia was a tremendous asset in bringing truth to the characters.

“We shot on the streets they’d have walked on and definitely the prison they were in,” he said. “There was a real energy and ghostlike presence to the place that really helped the movie. It made it feel extra real to me.

“She was very upset,” he said. “I could see how connected she was to her character and the story. I realized then that I had to meet Ruth at her level because she had already got that woman under her skin.”

One issue that got Negga so upset at the cemetery, Edgerton said, was that “Richard had a headstone” but Mildred didn’t. “It was a temporary kind of thing.”

The producers of “Loving” later righted that, getting Mildred a proper stone. But Edgerton said the image of ongoing injustice was striking. “It really made me think about the inequality of race and the difficulties of their marriage and what they endured. I was like, ‘We have a real responsibility here to get it right.’ “

But researching Richard was not easy. The couple’s only living child, Peggy, was very young when her father died in a car accident, so Edgerton mostly had to go by photos and Nancy Buirski’s 2011 documentary, “The Loving Story.”

“That was a chance to see them move and talk to each other and see the interminable shyness of Richard, watch him walk, and see his sort of bricklayer’s posture,” Edgerton said.

“Richard wished the whole situation would go away. If Richard could close his eyes and clench his fists and everybody just leave him alone except his wife, that would be his wish come true. So we just strived for that. It was a very good challenge to express things without words. Silence through a camera often expresses an honesty that words often cloud.”

Edgerton said Richard also struggled with the emasculation he felt at not being able to properly fulfill the dreams of his wife and family.

“The real strength in that relationship was Mildred,” he said, “and we see her give Richard back his masculinity by saying, ‘You do look after me.’ But I’m sure that until the day he died he never felt like he was that guy.”

As for whether the Australian actor (“Warrior”) could relate to this recent era of Southern racism, Edgerton said, “Absolutely.”

“We have a shameful part of our history, which we do acknowledge, called ‘The Stolen Generation,’ in which children were taken away from their aboriginal families and Europeanized. So a lot of families were broken up by the government, and that continued on until as late as the early ‘70s. It’s a shameful thing.

“We’re still not there with marriage equality for same-sex couples,” he said, “and I’m a straight man who’s enraged by that.”

Edgerton noted how recently the Loving case played out and urged people to think about history when they decide which side of an issue they want to be on.

“If you’re a legislator,” he said, “when you’re about to do something and you’re wondering if it’s morally ethical, imagine that you’re about to do it in a movie surrounded by 400 people eating popcorn — and then decide. Do you want to be the hero or the villain in this movie?”

Regarding the tragic story of the Lovings, Edgerton said wistfully, “I just don’t get it. Richard and Mildred … they lived on a farm. Who were they bothering? “