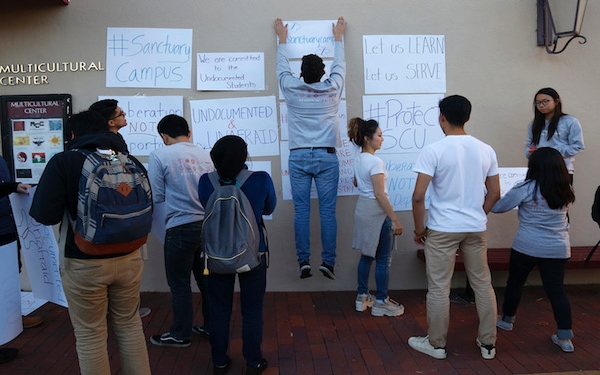 If Trump makes good on his promise to cancel the controversial Deferred Action for Childhood Arrivals program, which gives thousands of young, undocumented immigrants temporary relief from deportation, they say, students abroad could be barred from re-entering the country.

In a letter sent to each of its 23 campuses, the California State University’s Office of the Chancellor has advised administrators to tell DACA recipients currently studying abroad to return to the U.S. before the new president’s inauguration. “It is highly likely that as of Jan. 20, DACA students who are abroad will not be allowed to re-enter the U.S,” the letter said.

The letter, which an academic adviser at San Jose State shared with about 2,000 students, according to university spokeswoman Pat Harris, also advises DACA students who were planning to study internationally next year to think twice.

Harris said the school isn’t aware of any DACA students currently studying abroad or planning to do so next year, but the university doesn’t keep a record of recipients.

“We of course want students to know the reality of federal law,” she said.

The University of California’s Office of the President said advisers at its nine campuses are working with students participating in its Education Abroad Program to make sure they are aware of the implications of leaving the U.S. The program will waive withdrawal fees for DACA students who cancel plans to study abroad, said spokeswoman Claire Doan.

Established in 2012 under an executive action by the Obama administration, the Deferred Action for Childhood Arrivals, or DACA, program provides temporary deportation relief to young people brought to the U.S. illegally as children. Nearly a third of the 742,000 so-called Dreamers live in California.

Since the program’s inception, an estimated 1.3 million unauthorized young people have received deferred action, according to U.S. Citizenship and Immigration Services. That includes an estimated 526,000 who have received approved renewals. DACA recipients can travel internationally under a system known as advance parole, an application submitted to USCIS that allows them to travel outside the country and return lawfully.

If the incoming Trump administration cancels DACA, students would essentially be on an advance parole that no longer exists, according to Lynette Parker, an immigration law expert and associate clinical professor of law at the Santa Clara University School of Law.

More than 200 college and university presidents have signed a statement calling on Trump to continue and expand DACA, including leaders at UC Berkeley, UC Davis, UC Santa Cruz, Santa Clara University, the University of San Francisco and the University of the Pacific, among others.

“We are prepared to meet with you to present our case. This is both a moral imperative and a national necessity. America needs talent — and these students, who have been raised and educated in the United States, are already part of our national community. They represent what is best about America, and as scholars and leaders they are essential to the future,” said the statement, organized by Pomona College President David Oxtoby.