This guy eats hot wings with celebrities for a living. Seriously. 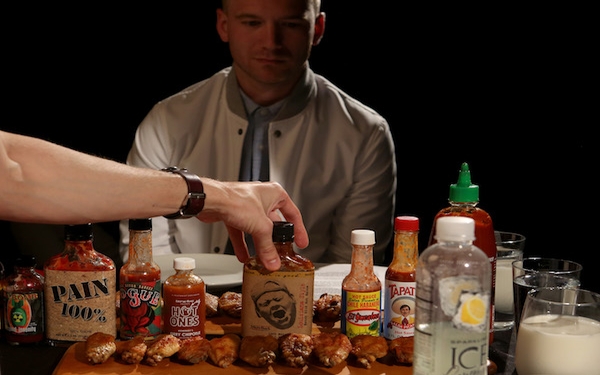 Meet Sean Evans. He’s a 30-year-old from Chicago who is especially adept at eating hot wings. He also once ate an entire Carolina Reaper pepper on camera with a well-known Danish chile fanatic named Chili Klaus.

A little more than a year ago, Evans became the host of a YouTube series called “Hot Ones,” produced by FirstWeFeast.com and Complex Media, which airs every Thursday. His job: to interview celebrities while he and his interview subject both eat chicken wings coated in sauces with increasing levels of heat. This is how it works: Somebody famous, maybe Michael Rapaport, comedy duo Key and Peele, Bert Kreischer, DJ Khaled or Kevin Hart, sits across from Evans at a small table. Both Evans and his guest are presented with a board of 10 wings, all sauced with hot sauce. The first is the mildest wing; the last is the hottest. Evans interviews the guest as the two make their way through the hot wings. If the person sitting at the table finishes the wings, then he or she gets 30 seconds to plug whatever he/she wants. Yes, that’s the prize.

There is a lot of swearing, sweating and stuttering. Bottles of water explode, copious amounts of milk are consumed — and most everyone cries. Some of the hotter sauces, including Blair’s Mega Death sauce, made with habanero peppers and cayenne pepper, measures at 550,000 Scoville units. To put things in perspective, a jalapeño is anywhere between 2,500 and 10,000 Scoville units; the Carolina Reaper, currently the hottest pepper in the world, is 2,200,000 Scoville units.

This chile-fueled chaos is the brainchild of Evans and FirstWeFeast.com Editor in Chief Chris Schonberger. The two created the show, and along with it, its own hot sauce you can buy online. Called the Hot Ones hot sauce, it’s a mix of chipotle pepper, ghost pepper, habanero pepper, pineapple and lime, made for the show by the Phoenix, Ariz.-based Homeboy’s Hot Sauce. Los Angeles-based Homeboy Industries, which helps provide jobs to people who have been formerly incarcerated. Of the 10 wings eaten on the show (one being the mildest), wing No. 5 is always sauced in Hot Ones hot sauce.

So how did a Chicago kid who worked as a copy writer for the Chicago tourism board up eating hot wings across from Key and Peele? Here’s a look at the host of the best, funniest food-related show you’re not watching.

How did you get here?  Chris [Schonberger] had this idea to interview celebrities but have them eat, like, violent-hot chicken wings. It was kind of inspired by Alexa Chung, who used to do these offbeat interviews on this English TV channel. We thought, we can introduce this sort of disruptive element. We don’t know what it will yield exactly, but it will be a reaction of some kind.

Did you ever see yourself doing something like this?  My earliest memory as a kid is my dad would tape Letterman during the week and binge-watch them all on a Saturday. I’d make him do this thing whenever the audience laughed, I’d make him pause the VCR and explain the joke to me. In a weird way this was probably all created because I just want to make my dad laugh the way Letterman made him laugh. I became obsessed with Letterman and the interviews.

Do you eat wings when you’re not doing this?  Now I stay away from wings. I used to love wings. People come up to me and say, ‘Hey, you have to try this hot sauce, let’s go get wings.’ I don’t even want to do that for Key and Peele. This is not a hobby. This is what I’ll go through in the same way Steve-O made a name for himself stapling himself to two-by-fours.

How do you prepare yourself for the heat?  I just die every time. People always ask, ‘Do you line your stomach?’ No. I just have that experience. I’m not a superhero and I go through it and it sucks at times. Growing up my dad would always have hot salsa. When I’m a little kid watching Chicago Bears games, hot salsa would be on the table and the first time I was, like, ‘Ah, this is hot Dad, get mild salsa,’ and he was, like: ‘Not in my house. We have real salsa. And if you can’t handle real salsa then you can just eat dry chips.’ By virtue of this C-, D+ parenting that I had, I ended up kind of building up a tolerance to spice. I don’t have a ton of talents. I’m not this conventionally attractive TV dude. I’m not Ryan Seacrest. If I want people to pay attention to me, I have to just eat scorching-hot food.

Where do the wings on the show come from?  They will switch up. Gunplay, when he was in, he wanted Wing Stop because Rick Ross has a Wing Stop ownership deal or something like that, so we’re usually pretty accommodating. We’ve had one vegan celebrity come in, RZA from Wu-Tang Clan, we got him vegan wings. If somebody has a request we’ll fulfill it. But otherwise we’ll just order from Buffalo Wild Wings or whatever.

Why is the prize at the end a 30-second plug?  We thought, wouldn’t it be funny if this is all for no real reason? Or if we made them work so hard for just the most basic reason for coming through? And everybody who we spoke to about it was, like, you need to give them a big prize. We were, like, no, it’s way funnier if we put them through this and then just give them the only reason they’d come in the first place. I mean we do give them a bag with, like, a T-shirt. And they get hot sauce.

Have things ever gotten too hot?  There’s always a part of me that kind of thinks this show, what’s going to break down the show is I’m going to get sick, someone is going to get sick or a serious medical issue. We really are operating on the edge, which is part of the draw and the appeal of the whole thing, but it does cross my mind from time to time. We might have physically harmed a famous person.