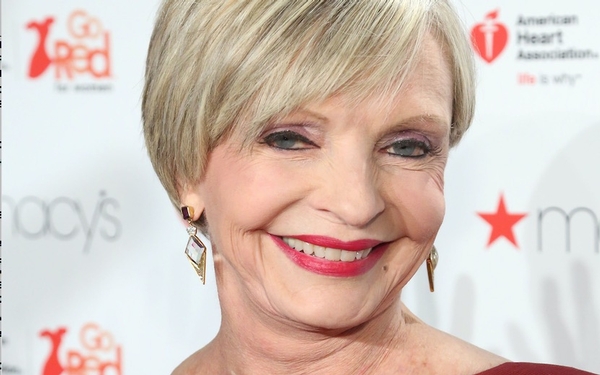 Florence Henderson, whose portrayal of Carol Brady on the iconic television show “The Brady Bunch” created an idealized mother figure for an entire generation, died Thursday. She was 82.

Henderson died from heart failure about 7:30 p.m. while surrounded by her four children, said her longtime manager and publicist Kayla Pressman.

As Pressman’s telephone continued ringing, the woman who has worked with Henderson for 43 years — starting as her personal assistant — said the actress was “the most vibrant, beautiful inside and out person I’ve ever known in my entire life. We just never left each other. She was so wonderful to be with and she was most loyal.”

Fidelity proved to be one of Henderson’s trademarks, she said, adding that the actress stayed with the same business manager since she was 18 years old, and when he died, worked with his son. Henderson also had the same agent for more than 30 years. “She keeps long relationships,” Pressman said. “I can’t say enough about the remarkable person she is.”

Henderson was a well-known nightclub entertainer performing in Texas when she was asked to audition for the role that would change her life.

Hoping to jet into Los Angeles, have a screen test for “Brady Bunch” creator Sherwood Schwartz and then get back in time for the evening’s shows in Texas, Henderson was delayed by L.A. traffic and rushed onto the Paramount lot two hours late, frantically looking for a makeup artist to get her ready for the test. Finally, she found someone with a few spare minutes — on the set of “Star Trek.”

“I was sitting in a makeup chair between William Shatner, Leonard Nimoy and like six or eight space monsters. None of them had any idea who I was or made any attempt to be friendly, which really bugged me,” she recalled in TV son Barry Williams’ 1992 memoir, “Growing Up Brady.”

Bothered by what she believed to be a shoddy makeup job, Henderson joked through the screen test about how bad she looked, and Schwartz, impressed with her comic timing, gave her the role.

“Maybe I should thank that terrible makeup man, because in a way, his botch job helped me get the part,” she said in the book.

Henderson’s work as Carol on the series, which ran from 1969 to 1974, and her slyly sexy chemistry with co-star Robert Reed made the show thrive. The pair helped broaden acceptance of blended families. Carol, a single mother of three daughters, was married to Mike Brady, a single father of three sons.

Born in 1934 on Valentine’s Day, in Dale, Ind., Henderson was the youngest of 10 children of a homemaker and a tobacco sharecropper.

She later joked in a 2010 interview with The Times that she came out of the womb singing. By age 2, she knew 50 songs by heart.

“I don’t remember ever not singing,” she says. “My mother loved music and she taught me songs, country music, spirituals. I would sing for people and pass the hat when I was 4.”

She began her show business career at 17, when she attended New York’s American Academy of Dramatic Arts. Henderson left the school after her first year because she got a job in the chorus of the Broadway musical “Wish You Were Here,” directed by Josh Logan. She segued from the chorus to the lead role in the final national touring company of Rodgers and Hammerstein’s “Oklahoma!”

Logan remembered her from “Wish You Were Here” and cast her in the lead role of the 1954 musical “Fanny” with Ezio Pinza and Walter Slezak.

She appeared in other Broadway musicals, including Noel Coward’s final musical effort, 1963’s “The Girl Who Came to Supper.” From 1959-60, she was the “Today Girl” on the “Today” show,” presenting weather and light news stories. Later she was the first female guest host of “The Tonight Show Starring Johnny Carson” in the 1970s.

After her years on “The Brady Bunch,” Henderson became a commercial spokeswoman and co-produced “Country Kitchen,” a Nashville Network series.