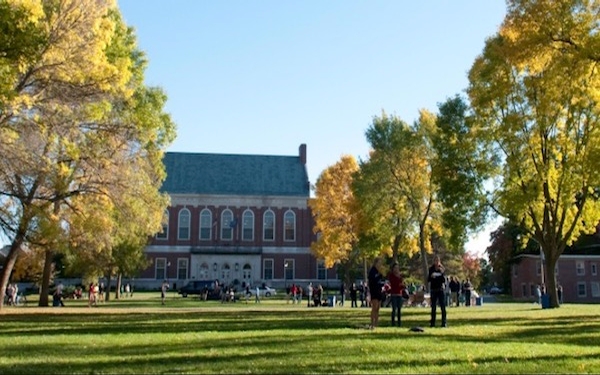 Worried there’s not enough room at the University of California? If you have the grades, a school on the opposite coast will welcome you with open arms — at a big discount.

The University of Maine is offering a deal to far-flung California students looking for a place to land next fall: Study 3,000 miles away at UC’s in-state tuition rate.

For $13,000, said Provost Jeffrey Hecker, “they could go to UC Berkeley — or they could possibly consider the University of Maine.”

Maine’s tuition experiment is the latest response to a severe supply-and-demand imbalance at California’s most prestigious campuses — a source of angst for families in the Golden State and an opportunity for colleges elsewhere needing to boost enrollment or tuition revenue.

Tuition is less than half of Maine’s standard bill for out-of-state students, but more than the $10,600 a Mainer pays. The 151-year-old university 60 miles northwest of Bar Harbor is extending a similar deal next fall to college applicants from Illinois and Rhode Island, and already offers the discount to students from six northeastern states.

This fall, a record 17,500 college students from California flooded into other states through a long-standing agreement between more than 150 colleges in the western U.S. According to the pact, students pay no more than 150 percent of their school’s in-state tuition. (While some California State campuses take part, Merced is the only participating UC campus.)

For California, the agreement is crucial — “a relief valve of sorts,” said Margo Colalancia, director of student exchange programs for the commission.

Ironically, out-of-state and international enrollment at the University of California soared after the Great Recession — even as the system turned away record numbers of in-state applicants — as campuses relied more heavily on out-of-state tuition dollars to balance their budgets.

California students attending other states’ public universities saved more than $170 million this fall term through the discounts provided through the interstate agreement, by the commission’s estimate.

But Maine’s deal — offering students the same in-state tuition rates they would pay in their states — stands apart, Colalancia said.

Maine’s declining population of high school graduates is forcing the state — and the university — to try to shore up enrollment by drawing bright students from other states who might enter the state’s workforce after they graduate, said Hecker, UMaine’s provost.

To keep the scholarship, students will need to maintain a 3.0 GPA. UMaine’s application deadline is Feb. 1.

According to Associated Press, more than 50 state schools have slashed out-of-state tuition by at least 10 percent in recent years without cutting costs for in-state residents.

“If we’re to maintain our enrollment, we’re going to need to be recruiting people from other states,” UMaine’s Hecker said.

The land-grant university in the small town of Orono has less than 11,000 full-time students, offers strong programs in forestry, marine sciences and wildlife ecology and will appeal to those searching for a research university with the feel of a New England college, he said. Students might benefit from having fewer big-city distractions.

“We’re in an environment where access to forests and wildlife is very close,” Hecker said. “It’s a different kind of lifestyle. Orono is not San Francisco by any stretch of the imagination.”

Kaitlyn Corral, a freshman from Los Angeles County, is studying chemical engineering at UMaine on an athletic scholarship. The 18-year-old soccer player — who saw snow flurries for the first time on Tuesday — said she was the only one from her large high school to even apply. She expects the tuition deal will encourage more Californians to consider the possibility.

“The school is beautiful, the campus is gorgeous, and the professors are outstanding,” Corral said, adding one must for any Californian considering the offer. “Buy a really big winter coat.”

In addition to the UMaine Flagship Match program, California students can get discounts at 144 two-year and four-year public colleges in other western states.

For more information on the Western Undergraduate Exchange, including a list of schools, visit www.wiche.edu/wue.

For more on the University of Maine’s program, visit https://go.umaine.edu/apply/scholarships/flagship-match.