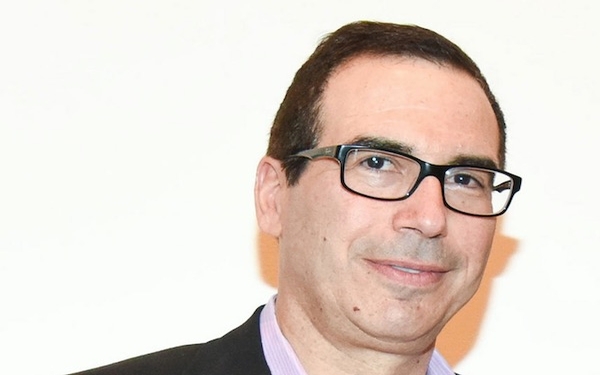 President-elect Donald Trump’s naming of veteran Wall Street banker and hedge-fund manager Steve Mnuchin to be the next Treasury secretary quickly turned into a polarizing appointment on Wednesday as financiers cheered the selection while watchdog groups warned that it could lead to rollbacks of crucial post-crisis regulations.

Mnuchin, who was a Goldman Sachs partner before starting Dune Capital Management and later running Pasadena, Calif., lender OneWest Bank, confirmed the appointment in an early morning appearance on CNBC. He appeared alongside billionaire investor Wilbur Ross, who was named Commerce secretary.

Mnuchin said his top priorities would be to hasten economic growth and job creation through tax cuts and a loosening of post-crisis financial regulations.

“We’re really going to be focused on economic growth and creating jobs,” said Mnuchin, 53, whose appointment must be confirmed by the Senate. “Our most important priority is sustained economic growth.”

He boldly predicted the economy could sustain an annual growth rate of as high as 4 percent, about twice as fast as the economy has grown since 2009.

Mnuchin, who served as Trump’s campaign finance chairman, had long been considered a top contender for the Treasury post, though his selection runs counter to the anti-establishment rhetoric of the Trump campaign.

Throughout this year’s presidential campaign, Trump criticized Democratic candidate Hillary Clinton for being too cozy with Wall Street.

A Trump ad that aired during the final days of the campaign called hedge fund manger George Soros — a Clinton supporter who is a business associate of Mnuchin — someone who controls “the levers of power in Washington.”

It also implied that Goldman Sachs, where Mnuchin’s father also was a partner, has been the beneficiary of policies that have “robbed our working class.” The add featured footage of Goldman Chief Executive Lloyd Blankfein at a Clinton Global Initiative event.

Mnuchin spent 17 years at Goldman before leaving in 2002 to work with Soros. Later, he started Dune Capital, a hedge fund that was his entree to Hollywood. An offshoot of Dune Capital financed Hollywood blockbusters including “American Sniper” and “Mad Max: Fury Road.”

Sen. Elizabeth Warren, D-Mass., a leading financial industry critic, called Mnuchin “the Forrest Gump of the financial crisis” because he “managed to participate in all the worst practices on Wall Street” during his lengthy career.

“His selection as Treasury secretary should send shivers down the spine of every American who got hit hard by the financial crisis, and is the latest sign that Donald Trump has no intention of draining the swamp and every intention of running Washington to benefit himself and his rich buddies,” she said.

“We had candidate Trump who got elected promising to drain the swamp of special interests,” Kelleher said. “Now we have President-elect Trump promoting the biggest swamp-dwellers into his administration.”

But those establishment credentials don’t worry some Trump supporters, including Tim Donnelly, a hard-right conservative who served two terms in the California Assembly and ran unsuccessfully for governor in 2014.

During that campaign, he pilloried fellow Republican candidate Neel Kashkari — currently serving as president of the Federal Reserve Bank of Minneapolis — for his role in overseeing the federal bank bailout program in 2008 and 2009.

“If (Trump) picked someone like Jamie Dimon or Blankfein or one of those guys from the old guard, that would be the establishment,” Donnelly said Wednesday. “We’re counting on him putting successful people in charge of executing. The execution is more important than the purity.”

Any of those choices probably would have been cheered by Wall Street — Dimon is one of the banking industry’s top executives and Hensarling has called for rolling back financial regulation.

Although Mnuchin is less well known, his selection drew praise from Tim Pawlenty, head of the Financial Services Roundtable, a Washington organization that represents the nation’s largest banking and financial services companies.

“Steve is a seasoned and results-oriented leader who is really smart, interested in public policy and understands the urgent need to boost economic growth and opportunity,” said Pawlenty, a former Republican governor of Minnesota.

But how Mnuchin might seek to boost growth has consumer advocates and Wall Street critics nervous.

During the campaign, Trump said he would seek to dismantle much of the Dodd-Frank Wall Street Reform Act, a sweeping 2010 bill that sought to rein in big banks and prevent another financial crisis.

Mnuchin said on CNBC that he does not want a wholesale repeal, but does want to make substantial changes.

“We want to strip back parts of Dodd-Frank that restrict banks from lending,” Mnuchin said. “The No. 1 priority will be to make sure banks lend.”

Kelleher said that Mnuchin should instead subject more financial companies to the kind of strict scrutiny now reserved for the largest banks. He noted that as Treasury secretary, Mnuchin would serve as chairman of a federal financial committee that has oversight of large nonbank businesses such as insurance companies.

“If you have a Treasury secretary who doesn’t think that type of regulation is appropriate, the country is going to end up in a disastrous situation. The American people will once again be surprised with the equivalent of another AIG,” Kelleher said, referring to the massive insurance company that had to be bailed out in 2008.

For Democrats and consumer advocates, hearing Mnuchin talk about a rollback of Dodd-Frank is troubling given his recent history in the banking business. Mnuchin in 2009 led a group of wealthy investors — including Soros and Michael Dell — who bought failed Pasadena mortgage lender IndyMac and turned it into OneWest Bank.

Mnuchin’s group netted billions thanks in large part to a much-criticized deal that allowed the investors to buy the bank at a big discount while passing off as much as 75 percent of its loan losses on the Federal Deposit Insurance Corp. Mnuchin and his group paid about $1.6 billion for the bank and sold it last year to New Jersey lender CIT Group for $3.4 billion.

Between the sale price and hefty dividends paid out from 2011 to 2015, Mnuchin and his group made a profit of more than $4 billion. It’s not clear how much of a profit Mnuchin personally made, because his stake in OneWest was undisclosed.

Despite its secure financial footing, OneWest had a history of problems with regulators over its foreclosure practices and lending and has been accused of being unwilling to work with borrowers seeking mortgage loan modifications despite promises to do so. Community groups have accused the bank of being particularly aggressive about foreclosing on properties in minority neighborhoods.

In 2011, dozens of activists protested the practices on the lawn of Mnuchin’s 22,000-square-foot Bel-Air mansion. That same year, the federal Office of Thrift Supervision hit the bank with a regulatory order saying it had failed to follow procedures when foreclosing on homeowners.

“Steve Mnuchin ran a foreclosure machine,” said Paulina Gonzalez, executive director of the California Reinvestment Coalition, which fought the CIT-OneWest deal and is one of the groups asking HUD to investigate the banks for discrimination.

Mnuchin, a divorced father of three who graduated from Yale, defended OneWest on Wednesday.

“We bought the worst mortgage portfolio in the history of time,” he said of IndyMac, adding that the bad loans that led to the foreclosures had been originated before his purchase of the bank.

“We saved a lot of jobs and we created a lot of opportunities for corporate loans,” he said.

(Koren reported from Los Angeles and Puzzanghera from Washington.)