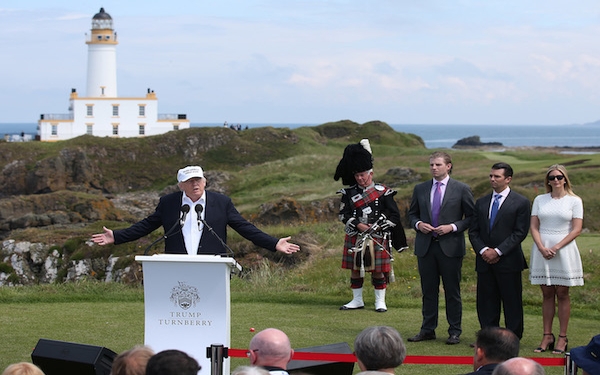 Donald Trump’s decision to step away “in total” from his business empire and apparently let his grown children run it is just one of a handful of options for him to lower the risk of conflicts of interest.

Virtually all of Trump’s financial options, except the complete divestiture of his and his family members’ vast real estate holdings, pose the possibility for conflicts, ethics experts warn.

The president-elect announced in a series of four tweets Wednesday morning that he’d step away from his business, promising to hold a “major news conference” in New York on Dec. 15 with his children.

Trump said, “Legal documents are being crafted which take me completely out of business operations.”

Trump’s tweets were followed by a flurry of extraordinary Twitter messages from the U.S. Office of Government Ethics applauding Trump for his “total divestiture decision” — a statement that went further than Trump’s.

“If he truly and completely divests himself, sells off his assets, places the proceeds in a blind trust and lets an independent and completely separate entity control them while he is president instead of his children, then I will say bravo as well,'” said Rep. Elijah Cummings of Maryland, the top Democrat on the House Oversight Committee, who has asked for a review of Trump's business dealings.

If Trump plans instead to cede control of his businesses to his three adult children, as both the president-elect and a family lawyer have said he will do, he will have done little to avoid the myriad conflicts certain to arise, said Richard Painter, a University of Minnesota law professor who served as chief White House ethics lawyer under then-President George W. Bush.

“The only workable answer is to sell off these business interests,” Painter told McClatchy.

Some of Trump’s predecessors have accomplished this by assigning an independent trustee to sell off and reinvest their assets without their knowledge.

That’s called a blind trust, and it’s an “elegant way” for Trump to step away from conflicts, said Norman Eisen, who was the White House ethics czar for the Obama administration from 2009 to 2011.

George H.W. Bush, while Ronald Reagan’s vice president and then later as president, used a diversified trust, which is even more restrictive than a blind trust. It liquidated and reinvested his assets, but even information from tax returns was not divulged to Bush.

If Trump refuses to use a blind trust, “he can deal with all of these issues piecemeal,” Painter said, highlighting another option.

If going the piecemeal route, said Painter, the president-elect could:

—End all business dealings with foreign governments, to avoid running afoul of a constitutional clause that bars acceptance of anything of value from a foreign government. This would require that he refinance a loan his organization has from the Bank of China.

—Cease granting licenses for use of his name on hotels and other buildings around the world and try to have it removed it where possible, because it provides “too easy of a way of paying off the president.”

—Issue a presidential executive order prohibiting government officials from “discussing the affairs of the Trump Organization in the context of U.S. government business.” Any discussion between the Trump family or employees with a government worker could still leave open the potential for conflicts of interest or even unwanted attempts at bribery.

Trump has already come “dangerously close to an inappropriate conversation,” Painter said, referring to Trump’s post-election beckoning to British politician Nigel Farage, head of the UK Independence Party, to campaign against offshore wind farms. Trump thinks they are an eyesore for players on one of his exclusive, seaside golf courses in Scotland.

If Trump fails to divest his assets, Painter warned, he will face the risk that plaintiffs’ attorneys would pick through “every little piece of his business operation” in search of ways to sue the president.

There is “no silver bullet” to clear up Trump’s assets because many can’t easily be sold, said Kenneth Gross, a former senior attorney for the Federal Election Commission.

“One way to deal with the issue of conflicts is to figure out which assets cause the biggest issues in reality or at least from an appearance standpoint,” Gross said. “Foreign holdings should be high on the list of those to review.”

Few supporters expect Trump to sell off marquis properties and developments such as his New York towers, his Florida golf courses and the like.

“It would be nuts to believe that he was elected knowing the things that he built, the hospitality he is a part of, the retail aspects of his businesses three weeks ago, and then just fizzle away the next day,” former Arkansas Gov. Mike Huckabee, a Trump surrogate, told Fox News on Wednesday. “It’s just not reasonable.”

Democrats made it clear they plan on making Trump’s holdings a political issue. They called for hearings in a Wednesday letter to House Judiciary Committee Chairman Bob Goodlatte, R-Va.

“This request is all the more urgent in light of president-elect Trump (sic) announcement this morning that he will be ‘leaving (his) great business’ to his children, a move he felt would be ‘visually important,’” said the letter from 16 Democrats.