What is the ‘alt-right’? 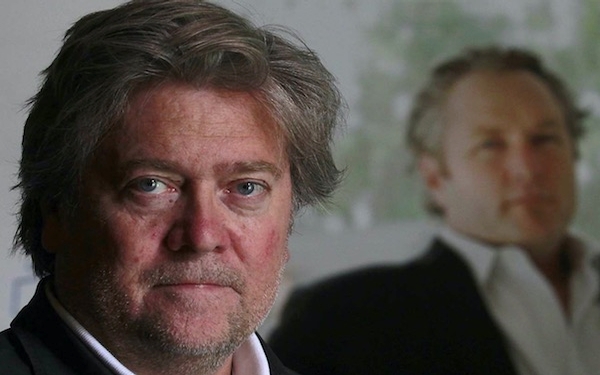 Stephen Bannon, proudly called Breitbart News, the website he ran before officially joining the Trump campaign, “the platform for the alt-right."

The campaign and election of Donald Trump have energized and emboldened a small but vocal corner of American right-wing politics that was mostly absent from the public consciousness: the “alt-right.”

The “alt-right,” or alternative right, is a loosely defined far-right movement associated with white nationalism, racism, misogyny, anti-Semitism, Islamophobia and a desire to keep the United States a majority white country.

While some leaders of the “alt-right” reject some of those terms, they are generally unabashed in their distaste for multiculturalism. They rage against political correctness and call the “alt-right” a movement of white identity politics — a vehicle for advancing the interests, generally, of white men.

At this summer’s Republican National Convention, Stephen Bannon, who will soon be Trump’s chief strategist in the White House, proudly called Breitbart News, the website he ran before officially joining the Trump campaign, “the platform for the alt-right.”

“They are mostly white, mostly male middle-American radicals,” says its explainer on the “alt-right,” “who are unapologetically embracing a new identity politics that prioritizes the interests of their own demographic.”

“Skinheads, by and large, are low-information, low-IQ thugs driven by the thrill of violence and tribal hatred,” the Breitbart authors, Milo Yiannopoulos and Allum Bokhari, write. “The alternative right are a much smarter group of people.”

The Anti Defamation League (ADL), a group that fights anti-Semitism, says the term itself, “alt-right,” consciously avoids any reference to race and is an attempt by white supremacists to appeal to a younger audience and stake out a presence within mainstream conservative thought.

“Though not every person who identifies with the “alt-right” is a white supremacist, most are and ‘white identity’ is central to people in this milieu,” the ADL writes.

The Southern Poverty Law Center, which tracks hate groups, writes that the “alt-right” is “a set of far-right ideologies, groups and individuals whose core belief is that ‘white identity’ is under attack by multicultural forces using ‘political correctness’ and ‘social justice’ to undermine white people and ‘their civilization.’”

The “alt-right” has thrived online, where its devotees spread anti-Semitic and racist memes, but, Yiannopoulos and Bokhari argue, only in an effort to “shock older generations.”

Richard Spencer, a white nationalist leader who is generally credited with coining the term “alt-right,” says the name is beside the point.

“The whole point is that this is a movement of consciousness and identity for European people in the 21st century,” said Spencer, who led a “Hail Trump” Nazi-style salute at a recent conference of his white nationalist think tank the National Policy Institute.

While only about 200 people attended Spencer’s conference, “alt-right” ideas have found a much larger audience on Breitbart, which had nearly 86 million visitors in October.

Under Bannon’s leadership, Breitbart created a news category titled “black crime,” ran an article calling a conservative Trump critic a “renegade Jew,” wrote that women are underrepresented in the tech industry because they “suck at interviews” and wrote that “Muslim rape culture” is integral to Islam.

Trump disavowed the “alt-right” after the election, and said he would not have hired Bannon if he thought he was “alt-right.”

But that hasn’t quelled fears that Bannon, and the “alt-right” generally, will have an outsize impact on Trump’s administration.

Trump’s pick for national security adviser, Lt. Gen. Michael Flynn, has regularly praised and interacted with “alt-right” leaders on social media and wrote in February that “fear of Muslims is RATIONAL.”

“There are no Nazis here, no white nationalists here,” said Joel Pollak, a Breitbart writer and an Orthodox Jew. “If our articles appeal to people beyond our core audience, there is nothing I can do about that.”