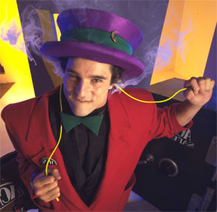 A brand new kind of visual comedy graces Hollywood and its late-night crowd. 'Sylvester the Jester' promises a show like no other. On stage, in front of your very eyes, a real live cartoon performs comedy and morphs into physically impossible shapes. The show takes animation to new heights by reaching out to an adult audience and incorporating adult humor.

Dan Sylvester, a renowned magical entertainer, performs 'Sylvester' in Hollywood’s popular venue, Theatre West, the acclaimed non-profit arts organization in Hollywood. Theatre West has been a hit with the young Hollywood crowd for years and is finally introducing high-quality late-night shows to cater to the energetic masses.

Previously seen only at exclusive venues such as Las Vegas Casinos and Hollywood’s Magic Castle, 'Sylvester the Jester' fuses together comic violence with adult humor and a touch of bad manners. The rowdy show is a one-of-a-kind theatrical experience filled with incredible magic and eye-popping stunts. The show features innovative illusions unlike any performed live on stage before.

'Sylvester the Jester' has been extremely popular on dozens of television shows and especially a hit on the casino circuit in Las Vegas performing at MGM Grand, Sahara, Golden Nugget, Tropicana and Reno’s Flamingo Hilton.

Putting a spin on typical magic shows, 'Sylvester' is able to make his eyes, mouth, tongue and head change shape just like a cartoon right before your very eyes. The show also includes some typical components like playful assaults on audience members and hilarious props.

The shows late-night time slot is conducive to much more irreverent humor and acts. With ticket prices set at just $12, 'Sylvester the Jester is a new and affordable show to spend an evening out enjoying.

Theatre West is the oldest continually running arts organization in Los Angeles and some of Hollywood’s greatest performers have made it their artistic home. The theater is a democratic, artistic cooperative dedicated to the artistic growth of its members and to meaningful involvement with the Los Angeles community.

The surreal show defies the boundaries of dimensional reality as Sylvester distends and distorts into ways you would only see in a cartoon. The show also boasts spoofs about consumerism and modern lifestyles. Sylvester is funny and wacky and full of appealing relevant and smart humor.

The limited run of the unique 'Sylvester the Jester' show will provide an opportunity for Angelinos to see innovative illusions and put aside any preconceptions about magic shows.

Magician Dan Sylvester reflects influences of Monty Python, Benny Hill, the Three Stooges, as well as the creators of Daffy Duck, Porky Pig and Bugs Bunny. His silly humor and creative magic is combined to create the character of Sylvester the Jester. Dan Sylvester has performed worldwide and is considered a world-class entertainer at venues here such as the Magic Castle, Key Club and the Ice House.

The originality of 'Sylvester' will make for a unique night out to witness the animated world of cartoons come to life through comedy and magic. So, what are you waiting for? GET UP AND GET OUT!

Theatre West is located at 3333 Cahuenga Blvd. (between Universal Citywalk and the Hollywood Bowl), in Hollywood. Show times are Fridays & Saturdays 11:15 p.m. Tickets are $12. Free parking is available in the lot across the street from the theatre. For tickets call (323) 851-7977 or visit www.theatrewest.org.