‘Miss Sloane’ delves into hidden side of Washington 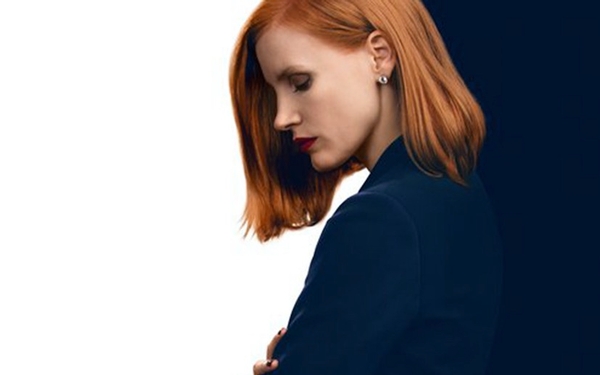 If you feel you’re not cynical enough about politics yet, “Miss Sloane” is a movie for you to discover. Jessica Chastain fires off a high-pressure Washington, D.C., thriller with subterfuge and backstabbing galore.

It’s a companion piece to Chastain’s menacing and dark counterterrorist thriller “Zero Dark Thirty.” The battlefields here are the meeting rooms of cutthroat lobbying firms; the procedural details are the schemes for government power grabs, and the stakes are whether a gun control bill with broad public support and mammoth corporate opposition can ever become law.

Elizabeth Sloane is a manipulative, Machiavellian top dog at a prestigious Capitol Hill firm high in the shadowy world of backroom deals and nefarious promises. She doesn’t care whom she’s competing with or what’s at stake. She’s all about the win.

Wearing lethal-looking stiletto heels and a “Buzz off, you’re annoying me” expression, she occupies a frantic, thrilling world that is all workaholic adrenaline and no private life. She sees more excitement in getting Congress to cut a tariff on palm oil than in anything resembling human relations. Taking pills has kept her from flipping out, and the casual sex life she employs to keep her tension in check is a story in itself.

Whether this complicated woman feels any sense of self-disgust is a question that arises when she quits her high-status position to back a losing team. A rival firm is trying to revise the Second Amendment, not to take away guns from their owners but to keep them out of the hands of terrorists and nut jobs. (With the recent case of a gunman led by a hoax conspiracy theory to shoot up a D.C. pizzeria, it’s a relevant issue.)

Sloane knows both sides of the upcoming fight and decides to go for the unexpected win that would catapult her to the top of her lucrative profession. Success is her fixation, just as the elusive Osama bin Laden was the obsession of Chastain’s monomaniac CIA agent in “Zero Dark Thirty.” She is very good at playing addictive personalities.

Director John Madden (who also teamed with Chastain in the Israeli spy thriller “The Debt”) keeps the tension level high as Sloane schemes to clamp a chokehold on everyone in her morally ambiguous orbit.

It takes a while to figure out who the other players are and how they fit in, including Sloane’s lobbying colleague Esme (Gugu Mbatha-Raw), passionate gun-control crusader Rodolfo (Mark Strong), who has hired Sloane to do the impossible, and Congressman Sperling (John Lithgow), who supports the proposed bill.

Lost documents and high-tech sleuthing reveal hidden wrongdoing and various characters’ culpability. It’s not a spoiler to note that lots of people here keep their cards close to their chests.

As do the filmmakers, who like to keep the audience hyperventilating. No one in the cast has ever had better lines than first-time screenwriter Jonathan Perera’s lucid script hands them.

Madden keeps the focus on multiple characters’ strategies of survival in a wildly corrupt world. The tone is a melodramatic rather than sardonic view of life. It’s like a talky, detail-packed Aaron Sorkin saga, with a daunting profusion of smart, rapid dialogue and surface details that are bewildering at the beginning and pay off in the finale.

The film is short of perfection, with a subplot about a male escort to the power elite that feels tacked on, and it pays a bit too little attention to a frighteningly nasty power broker played by the usually incorruptible Sam Waterston. Nonetheless, “Miss Sloane” crosses the finish line in fine shape, an 11th-hour surge that arrives as a surprise. The movie looks and feels much better in retrospect at the climax than on the cleverly but over-elaborately structured road to get there.

Rating: R for ­language and some sexuality.