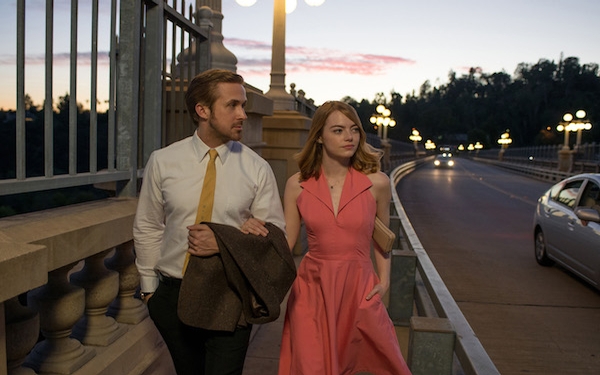 There’s a scene in the often-captivating new musical “La La Land” that sums up, in miniature, what writer-director Damien Chazelle is trying to pull off. It isn’t the opening dance number on a jammed Los Angeles freeway interchange, or the surreal extended homage to “The Band Wagon” and “Singin’ in the Rain.” It’s a simple conversation in a jazz club between two beautiful young artists — a pianist named Seb (Ryan Gosling) and an actress named Mia (Emma Stone) — who find themselves in the blissful early stages of love.

Their romance has begun on a rude, unpromising note: a blast of road rage (ah, L.A.!) followed by a not-so-friendly brief encounter. But in classic screwball fashion, their early animosity has given way to a powerful mutual attraction — one that carries some of the deep, improvisatory feeling of Seb’s favorite music. As saxophones wail and cymbals clang in the background, he defends the tradition of Miles Davis and Louis Armstrong with passion, erudition and righteous indignation: “They say jazz is dying on the vine, and the world says, ‘Let it die, it had its time.’ Well, not on my watch.”

The intensely protective love that Seb feels for jazz is more or less what Chazelle feels for the big-screen musical. After directing two movies, “Guy and Madeline on a Park Bench” (2009) and “Whiplash” (2014), that played with the possibilities of the form, this prodigious 31-year-old talent has emerged as an ardent and imaginative champion of an underappreciated, seemingly antiquated popular art form — one that he nevertheless believes still has many glory days ahead of it.

Starting, hopefully, with this movie. Extending his collaboration with the composer Justin Hurwitz, who penned the score and songs (with lyrics by Benj Pasek and Justin Paul), Chazelle has assembled a vibrant, infectiously hummable pastiche of musical and cinematic styles — an entrancing ode to the glories of cinema past as well as a heartfelt expression of faith in the medium’s future.

The result is, by any reasonable measure, one of the loveliest things you will experience in a theater this year. Much of this is because of the incandescent star wattage of Stone and Gosling, pulling off their third and finest screen collaboration after two Los Angeles-set romantic pairings — “Crazy, Stupid, Love” and “Gangster Squad” — that tried, in wildly different ways, to reanimate the spirit of classic Hollywood.

In contrast with those ensemble efforts, the focus here is entirely on the two leads, their desires and personal aspirations. Mia, a Nevada transplant, both feeds and frustrates her visions of Hollywood stardom by working as a barista on the Warner Bros. studio lot. Seb encourages her to write and star in a one-woman show, even as he stalls his dreams of running his own jazz club by joining a popular and thoroughly soulless R&B group.

From there the movie, skipping lightly between cliche and archetype, tells a familiar yet diverting story of persistence, compromise and hard-won professional triumph. Most of the jokes and setups in Chazelle’s screenplay are a series of cheeky riffs on contemporary L.A. life, where young people brave the smog and the traffic, shuttling between fruitless auditions and humiliating part-time gigs.

While the dialogue teems with snappy 21st century phrasings (listen closely for a sly reference to “world building”), the most meaningful beats of Seb and Mia’s love story play out not through spoken words, but through the singular, soulful alchemy of song and dance. To watch Stone and Gosling break into a spontaneous tap routine against a pink-hued Hollywood sunset, or waltz in mid-air against a starry replica of the Griffith Observatory’s famed planetarium, is to be reminded anew of how rarely they make ‘em like they used to.

That’s not to say that “La La Land,” for all its real and indelible movie magic, fully sustains itself over the course of two fast-moving hours. Chazelle sets the stage magnificently, with a bright, candy-colored assist from production designer David Wasco and costume designer Mary Zophres. Cinematographer Linus Sandgren and editor Tom Cross have absorbed all the right lessons from the MGM musical canon; even some of the non-dance sequences play out in anachronistically long takes, all the better to see the actors’ bodies moving through space.

But despite the considerable aesthetic brio on display, there also are specific choices and flourishes — a too-obviously dubbed lyric, an overly punch-drunk swirl of the camera — that, to borrow a phrase from “Whiplash,” may not be quite your tempo. Some of the more elaborate set pieces seem more audacious in their conception than in their execution, as if Chazelle’s studied formal mimicry were somehow keeping him from pulling out all the stops. For a movie that all but demands that you swoon into its arms, “La La Land” doesn’t always seem to know exactly how to surrender to itself.

These may be lapses of vision or technique, but they are also a clear testament to the extraordinary reach of Chazelle’s ambitions. On one level, “La La Land” is a brash, knowing tribute to the heyday of 1940s and ‘50s studio filmmaking; you get a splash of Stanley Donen here and a daub of Vincente Minnelli there, all capped by a sly wink to Frank Capra.

But Chazelle also is chasing the sweetly melancholic rapture of the French New Wave master Jacques Demy, whose Michel Legrand-scored ‘60s classics, “The Umbrellas of Cherbourg” and “The Young Girls of Rochefort,” set the rhythm for this movie’s dreamy melange of the lyrical and the everyday. Finally, the director is trying to synthesize all these cherished traditions into a form that speaks and sings to a young, post-“Glee” audience, whose diet of big-screen musicals has largely been confined to Disney cartoons and prestige Broadway adaptations such as “Les Miserables” and “Into the Woods.”

Given that “La La Land” is about two creative types struggling to find their way in an industry that slams the door at every turn, it’s no surprise that the movie suffers its own intermittent crises of identity — a very millennial-era conundrum that helps illuminate the nature of Chazelle’s achievement. As Mia and Seb figure out who they are and what kind of art they want to pursue, so “La La Land” gradually finds its own graceful footing.

There is, to be sure, plenty of fancy footwork at the outset — starting with that traffic-stopping overture, “Another Day of Sun,” which puts its own L.A. spin on the sweeping outdoor ballet popularized by the likes of “Rochefort” and “West Side Story.” With its chorus of multiethnic bodies leaping through the brisk steps of Mandy Moore’s car-hopping choreography, this sequence also pays tribute to the city’s diversity in a way that, it should be noted, the rest of the movie only fitfully matches (a prominent supporting role for John Legend as Seb’s bandleader notwithstanding).

A similar critique was leveled by some against “Whiplash,” which treated a historically African-American art form as a psychological battleground for two angry white men — a valid complaint that was somewhat mitigated by the actors’ blazing chemistry. (J.K. Simmons, who won an Oscar playing the music instructor from hell, makes an amusing cameo here as a jazz-hating philistine.) And so it is with “La La Land,” which may fail as a piece of musical sociology, but which wisely keeps Mia and Seb’s romance — and their romance with the city — firmly in the foreground.

Dotted with palm trees and Priuses, Chazelle’s L.A. is a cheeky simulacrum of the real thing, where the diets are mostly gluten-free and pool parties happen all year long. But it is also an enchantingly retro fantasyland, where Mia writes her play on a pad of paper instead of a laptop, and where a few plot points might have been rendered moot by a properly functioning cellphone.

In keeping with the old-timey vibes, Chazelle delights in throwing a spotlight on his characters — a timeless, expressionistic gesture that elevates their personal reveries to the level of the sublime. The glory of “La La Land,” it turns out, isn’t in those big, would-be-show-stopping numbers. It’s in the intimate, quavering grace notes: the sound of Seb whistling his way through a minor-key nocturne (“City of stars, are you shining just for me?”), his thin, lilting voice eventually joining Mia’s as they giggle and harmonize their way through an impromptu duet.

Stone and Gosling are not the second coming of Fred Astaire and Cyd Charisse, or Gene Kelly and Debbie Reynolds, and the movie doesn’t require them to be. In scene after scene, Chazelle seems to grasp the authentic essence of who these actors really are in a way that few other directors have managed.

Gosling’s charm has always been predicated on a measure of self-mockery, an awareness of his own ridiculously dreamy beauty, and his performance here is a marvel of sly one-liners and raised eyebrows as well as smoothly executed glissandos. Stone, looking radiant in bold primary colors, has her adorably goofy side as well, which makes her piercing emotional depth catch you all the more unawares: She combines the steely comic directness of a latter-day Barbara Stanwyck or Carole Lombard with the sort of heart-melting honesty that cuts right through all the shimmering layers of artifice.

“Here’s to the fools who dream,” Stone sings in her climactic number. And for at least one splendid, soaring moment, “La La Land” finally casts caution aside and makes proper fools and dreamers of us all.

MPAA rating: PG-13, for some language