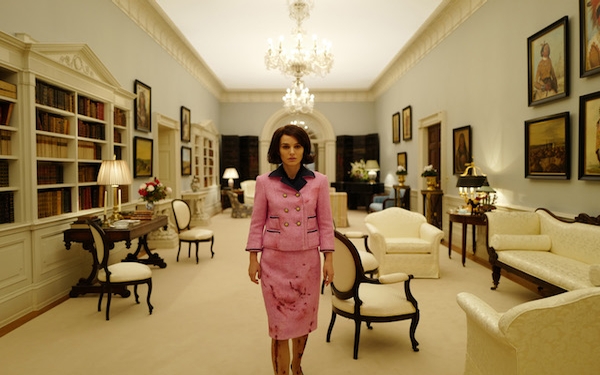 The shock, grief and spotlight glare endured by Jacqueline Bouvier Kennedy, in the days following her husband’s 1963 assassination, was there for all to see. Yet who knows what she was truly thinking, feeling, screaming inside while wiping her husband’s dried blood off her famous pink dress, or watching Lyndon B. Johnson taking the oath aboard Air Force One?

As a culture steeped in prurient sympathy, we keep coming back to the woman who later became Jacqueline Kennedy Onassis. She embodies (while concealing so much about) the violent contrast of the public and private individual.

That’s familiar territory for historical biopics, but director Pablo Larrain’s “Jackie,” starring a brilliantly cast and consistently compelling Natalie Portman, goes its own way. It’s an odd, hermetic and fascinating picture. Not incidentally composer Mica Levi’s unnerving musical score is the year’s finest, which is lucky, because her music is all over the picture, intimating so much without words in the realm of disorientation, solace, dignity and psychic trauma.

Chilean-born director Larrain’s films include the terrific “No” (2012), in which he blended archival footage and free-form dramatic sequences in a fact-based tale of how some crafty advertising devils mounted a TV campaign to topple the brutal Pinochet regime. In “Jackie” Larrain is tasked with similar duties, re-creating many famous and infamous moments in the first lady’s life: the Dealey Plaza melee in Dallas; the security risk of the funeral procession in Washington; earlier, the 1962 televised White House tour conducted by Jackie. In those on-camera flashbacks, particularly, Portman relishes Jackie’s nearly excruciating on-screen poise and finishing school diction, allowing the mask to drop, or the voice to relax, only occasionally.

The movie’s framework is a post-assassination interview, inspired loosely by several actual interviews Jackie sat for in the wake of the tragedy. Billy Crudup portrays the steely journalist trying to pry some unguarded emotion and revelation out of his subject out at the Hyannis Port, Mass., estate. He serves as her symbolic, subtly needling inquisitor, barely able to muster the usual courtesies and niceties the suddenly former first lady’s situation would seem to demand. In these scenes Portman lashes out at him, smoking nervously, burying her fear, rage and loss as best she can.

Written by Noah Oppenheim, “Jackie” declines to get into any conspiracy theories regarding the JFK assassination, though with John Carroll Lynch as LBJ, seething with resentment anytime Peter Sarsgaard’s rather-too-sinister Bobby Kennedy challenges him (this is historically on-point, FYI), there’s plenty of understated political turmoil going on behind these scenes. “Jackie” does not behave according to the usual biopic rules. It hovers over its subject’s burdened shoulder, rather than lay on the exposition, dutifully.

“Am I supposed to hide away? Now?” she asks an adviser, urging a fast disappearing act on the grieving widow. As Richard Burton sings of the glories of Camelot from the Broadway cast album, on the hi-fi, Portman’s Jackie gradually develops an idea about cementing her husband’s legacy. Throughout her dreamy nightmare it was hard to say “what was real, and what was performance,” as she says to confidant William Walton, played by Richard E. Grant. This is the guiding principle of Larrain’s trancelike picture. Even if it lacks full dimension, and a final imaginative leap past the biopic strictures, “Jackie” pulls you into its web, shot by shot, moment by moment — most of them Portman’s.

MPAA rating: R (for brief strong violence and some language)