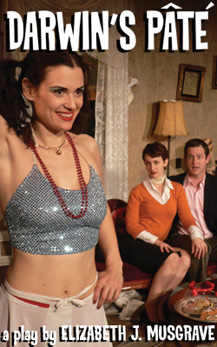 "A southern gothic tale of secrets, betrayal and revenge," "Darwin’s Pate" is a one-set play that takes place on a fine fall day in Savannah, Georgia. Bonnie and her mother are reclusive country bumpkins who invite over Margaret (Bonnie’s cousin whom she has not seen in years) and her conservative politician fiancé. As the uncomfortable meeting ensues it becomes apparent that Bonnie has some dark intentions for her long-lost cousin. The evening proves to be one that was not expected and will change the lives of everyone involved forever.

"Darwin’s Pate" is a dark and dramatic story involving agoraphobia, molestation, incest, drugs and politics. The strongest element in the production is by far the acting. Sarah Zoe Canner plays Bonnie, a completely frazzled and trashy, yet beautiful, young southern woman who hasn’t left her home in over a decade. Bonnie had dreams of being a dancer until her father’s untimely death forced her to return home and care for her mother.

Now she paints her face with hideous makeup, wears stained clothing and lives in a revoltingly filthy home. Canner’s portrayal of Bonnie is highly energetic and deeply angry. She is overly sexual yet won’t leave the house to meet new people. She is compulsively straightening the house and bringing out sweet tea for her guests, all the while an evil and sinister side is bubbling at her surface. Canner is convincing as a young woman gone slightly mad under the circumstances.

Ed Ellington portrays Vernon, the white-trash southern boy who is desperately in love with Bonnie. Ellington not only had the extreme southern accent down but also the appearance and demeanor of a bumbling fool in love who would (and does) do anything for his amour. Ellington provided practically the only comedic relief in the dark tale and had great stage presence and timing.

Jules Bruff did a noteworthy job as Margaret, Bonnie’s stuck-up estranged cousin who has moved out of the south and made a name for herself by running her fiancé’s campaign. She is frigid and stiff and always speaks perfectly and properly. Her fiancé, John, is played by Beau Baxter who is great as the smooth talking politician who actually has no control over his political career. He is Margaret’s puppet and an extremely conservative advocate for the Republican Party.

The play explores blackmail and extortion and touches on highly controversial issues, all the while keeping things light enough so the audience doesn’t get too serious.

The set design is outstanding and really reflects the chaotic nature of the story. Taking place in the living room of a southern home where things are cluttered and food and trash is strewn about, the characters are too busy living in a fantasy world to take care of reality.

The Pan Andreas Theater is a cozy little venue offering a very intimate atmosphere. The pretty courtyard is a nice place to hang out while waiting to be seated. The old English décor is mostly wood and the theater is small enough that every seat in the house has a great view. On a cold evening at the show you can grab a cup of coffee or a glass of wine at the entrance and take it in with you to enjoy with the performance. So, what are you waiting for? GET UP AND GET OUT!