Lukas Graham grows up and finds Grammy acclaim with ‘7 Years’ 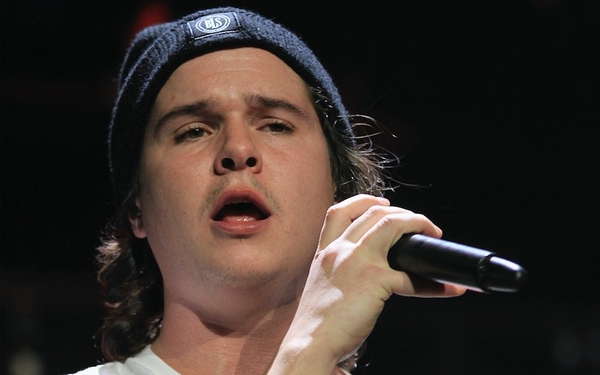 The biggest songs at the Grammys this year are about breakups, black womanhood and taking pills in Ibiza. All very up-to-the-minute topics for our era in pop music.

But then there’s the little piano ballad about slowly growing older and finding comfort in your family as some friends get left behind.

The song “7 Years,” from the Danish pop-rock quartet Lukas Graham, is an outlier in this year’s top-category Grammy nominations, which are dominated by the likes of Beyonce, Justin Bieber and Adele. The single, from an international re-release of the act’s 2015 self-titled album, is in contention for record and song of the year, along with pop duo/group performance.

On the road between tour dates in the Midwest, frontman Lukas Forchhammer sounded thrilled to have his single be so lauded. And not just by fans (the song hit No. 2 on Billboard’s singles chart), but also by fellow writers and artists at the Grammys.

“We knew this was peers voting for peers. It’s not like the other awards shows. If it was just fans voting, we wouldn’t have a chance, because we’re probably the smallest band (in the major categories),” Forchhammer said.

“But this is from people who enjoy the skills of how to write songs. ‘7 Years’ doesn’t have a hook, or maybe it’s all a hook. It doesn’t use a lot of the same formulas in other pop songs. We just use instinct and emotion.”

The single is also striking for its homespun, very un-Top-40 topicality.

It essentially follows a man’s life from childhood to old age, over a string of verses that never really resolve to a typical chorus. It’s earned comparisons to the Beatles’ “When I’m 64,” and its production sits right in the Ed Sheeran/Sam Smith axis of lightly soulful, earnest pop-rock.

It’s a starkly different approach than hyper-modern competitors like Rihanna’s “Work,” but it’s one that’s resonated with a huge swath of Grammy voters.

“It’s a storytelling record in the way that old country records are,” said Katie Vinten, co-head of A&R at music publisher Warner Chappell, who signed Forchhammer before he had a U.S. record deal.

“Pop radio doesn’t usually have the patience for that, but this year they did. People want to hear songs about the human condition and everything going on in the world. He’s not a 15-year-old pop star trying to find his identity, and I’m really excited for people to dig in deeper.”

Forchhammer too hopes his Grammy success is cause for a second look at the rest of the album. “It’s the perfect window into our world. If you listen to it, you can get into our storytelling about our friends and family,” he added.

Those Grammy nods are also a big American accolade for a band that comes from a tiny country (Denmark) far outshadowed by neighboring Sweden, at least in terms of pop-music prowess.

“We come from a country of 5½ million people, and we’ve been able to tour the world. To me, that’s quite a success,” Forchhammer said.

He described his musical childhood there as generally happy, but he’s also candid about his bad habits and having had friends spinning out in prison (see “Drunk in the Morning,” “Strip No More” and “Better Than Yourself (Criminal Mind Pt 2),” as well as fighting low expectations for success outside Europe. Those challenges gave him a worldview that turned out to resonate much wider than he’d anticipated. “We’ve kind of stopped being a ‘Danish band,’ and now we belong to everybody,” he said.

Now, with “7 Years” in the Grammy spotlight, the challenge will be to convince fans that Lukas Graham is much more than its one, very recognizable hit. The act may not beat Adele and Beyonce for cultural domination, but it’s proved that it can write songs that hit just as hard for Grammy voters.

“A lot of people look at us like ‘Oh, “7 Years,” they’re a one-hit wonder.’ But that isn’t even the best song on the record,” Forchhammer said. “I think the Grammy nominations are definitely going to make people check out the rest of our work. What we do is pretty unique, writing about family, friends and growing older. I think this is definitely going to open us up to new audiences.”