Will the fashion community warm up to Melania Trump? 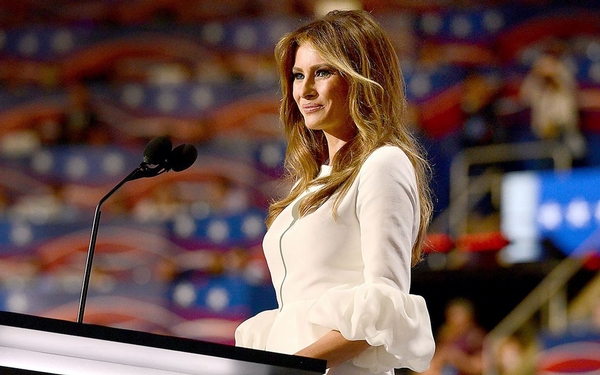 Happy or not, it seems almost everyone has something to say about the outcome of the presidential election.

During the campaign, the fashion community didn’t skimp on its support for Democratic candidate Hillary Clinton. Vogue editor Anna Wintour held a fundraiser for her during New York Fashion Week, while designers such as Marc Jacobs, Tory Burch and Public School’s Maxwell Osborne and Dao-Yi Chow created “Made for History” merchandise for her online store. For his fall collection, Iranian-Israeli designer Elie Tahari even featured a female president in his advertisements. It’s no surprise, then, that their relationship with Donald and Melania Trump has gotten off to a rocky start.

Despite her model roots, don’t expect to see designers enthusiastically jockeying to dress the incoming first lady. French designer Sophie Theallet, who’s outfitted Michelle Obama, shared an open letter on social media stating she will not “participate in dressing or associating in any way with the next first lady” — and she’s encouraging others to do the same. Humberto Leon, one of the founders and designers behind Opening Ceremony and Kenzo, has echoed her sentiments on his Facebook page: “If she buys your clothes, tell people you don’t support it.” (A number of other designers have declined to comment or have responded with vague answers when asked for their take on the topic.)

Don’t be too quick to call this sore-loser syndrome. For many fashion insiders — an industry largely comprosed of women, minorities, immigrants and members of the LGBTQ community — a Clinton loss cuts deeply. Just as the cast of the Tony Award-winning musical “Hamilton” used the theater to deliver a message of concern and hope to Vice President-elect Mike Pence, designers’ apparel and accessories are their platform to push their plea.

“The rhetoric of racism, sexism and xenophobia unleashed by her husband’s presidential campaign are incompatible with the shared values we live by,” wrote Theallet, who came to America to pursue her career.

Even some prominent fashion media sites are weighing in.

“Trump and/or his Vice President-elect Mike Pence have been openly hostile regarding LGBTQ equality, same-sex marriage, female reproductive rights, immigration reform and international trade (just to scratch the surface) — stances that not only alienate a good portion of the fashion community, but the nation as a whole. And this is why we plan on having no part in normalizing the Trump family, particularly when it comes to cataloging the first lady’s fashion choices,” Fashionista.com explained in an editorial published last month. The piece went on to say that the website will reserve coverage of Mrs. Trump’s fashions for “strictly newsworthy occasions.”

During the Obama administration, fashion’s who’s who have gotten pretty friendly with the first family. Mrs. Obama welcomed students from across the country to the White House for a fashion workshop as part of her Reach Higher education initiative. They got the chance to hear advice for making it in the industry from the likes of Diane von Furstenberg, Prabal Gurung, Jason Wu and Tracy Reese. She also encouraged diversity, entrepreneurship and American-made brands through her wardrobe picks and helped to skyrocket the careers of emerging talents like Wu, who designed the gowns she wore to inaugural balls in 2009 and 2013.

Then there’s what’s come to be known as “the Michelle Obama effect.” For 189 public appearances she made between November 2008 and December 2009, she generated about $2.7 billion in value for the companies whose pieces she sported, according to a study by David Yermack, professor of finance at the New York University Stern School of Business.

So far, Melania Trump has opted for off-the-rack outfits by Ralph Lauren (who’s outfitted Clinton for decades), Gucci and Fendi, to name a few. A Trump spokesperson told Women’s Wear Daily after the Republican National Convention that she wasn’t working one-on-one with any designers. While it’s unknown if that will change, her clothes already have been sparking sales. For instance, the white fitted dress with bell sleeves by London-based designer Roksanda Ilincic that she wore to give her convention speech swiftly sold out after her appearance. It retailed for $2,190 at net-a-porter.com.

The irony of all this, however, is that if designers turn their backs on Melania Trump, they run the risk of being discriminatory themselves. We don’t know much about Melania Trump or what kind of first lady she will be. Is it smart to shut her out, all the while Donald Trump is being criticized for shutting out Muslims, Hispanics, women, etc., with his brash rhetoric?

“How can we help on the eve of this new era?” von Furstenberg wrote in a letter to the 500-plus members of the Council of Fashion Designers of America, the nonprofit governing body for fashion in America. Her suggestions: “Embrace diversity, be open-minded, be generous and have compassion.” (She was a very public advocate for Clinton during the campaign.)

“I’m going to give Melania the benefit of the doubt,” Jeremy Scott, the creative director for Moschino and his own namesake label, told Vanity Fair. Tommy Hilfiger, Carolina Herrera, Rag & Bone’s Marcus Wainwright and Joseph Altuzarra are a few others who are open to giving her a chance.

Will that chance be reciprocated? Time, and perhaps Melania Trump’s sartorial taste come January, will tell.