Let whiskey smooth the way through a holiday dinner 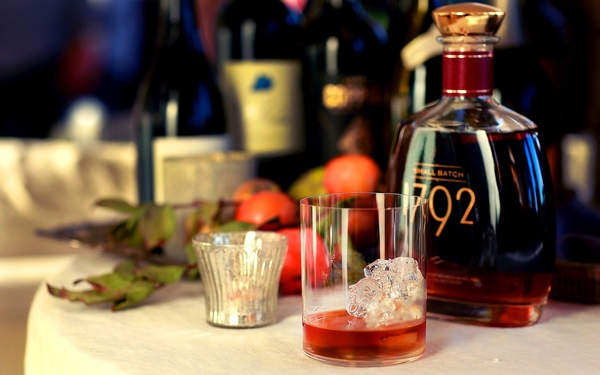 A nice pinot noir or even a Beaujolais Blanc Chardonnay may seem like the obvious, civilized options to serve for a holiday dinner — and they are. But something from the whiskey family may work even better at cutting through the holiday meal’s richness, and at soothing uncomfortable family exchanges across the table. Because if we’re being honest, most everything is made better by bourbon.

The smoke, spice and even vanilla found in many whiskeys offer a nice balance to all that roasted poultry, hearty root vegetables and those repeating slices of pie. And a drink with some bite, such as a rye with heavy spice notes, can offer some relief from the often monotonous textures of stuffing, mashed potatoes and green bean casserole.

Here are seven bottles capable of elevating your dinner to the type of meal you’d like to be at for hours, sitting around with family, hopefully watching football. Someone get the rocks glasses ready.

The fourth release in the Booker’s Bourbon 2016 batch collection, this stuff was made at the Jim Beam distillery in Clermont, Ky. Uncut and unfiltered, bottled at 128 proof and aged less than nine years, you’ll need to add a little water to this one. (If we were to compare bourbon to Marvel characters, this would be the Hulk.) Give it a whiff and the smell of campfire will knock you right between the eyes. Sips are more warm than smoky, with a bright vanilla flavor and some serious bite. Take small sips in between spoonfuls of mashed potatoes and gravy. Around $80.

Made by Tom Bulleit, great-grandson of Bulleit founder Augustus Bulleit, in Louisville, Ky., it’s the same Bulleit bourbon mash you may be familiar with, set aside to age for a decade in charred American white oak barrels. A tad smoky on the nose, the bourbon complements any roasted meat or vegetables on the table. That smoke quickly gives way to sweet honey and vanilla with that first sip, followed by spicy citrus and a nice, long finish. Around $50.

This Canadian whiskey was named the Whiskey Bible’s 2016 World Whisky of the Year. It’s made where all Crown Royal is made, in a small village called Gimli, off the western shore of Lake Winnepeg in Manitoba. The Northern Harvest Rye contains 90 percent rye grain along with corn and malted barley. The result is a smooth rye that goes down a little too easily, with undertones of vanilla and citrus, and no real bite. Serve neat in between your final helping of dressing and that first slice of pumpkin pie. Around $25.

Made at the Four Roses Distillery in Lawrenceburg, Ky., this is a gentle bourbon that’s easy to drink but not light on flavor. It smells of caramel and maple, but there’s no real sweetness there. Big, full-bodied flavors of ripe cherry will coat your mouth, followed by a mellow finish that may conjure images of those tiny red boxes of raisins. You should be reclined in your seat when you drink this one, preferably with a piece of pie in one hand. Around $40.

Tell that wino uncle of yours to give this one a couple of exaggerated swishes around the glass to detect the faint but distinct aroma of licorice and buttered, toasted bread. This is a whiskey with some real developed character, aged between 10 and 12 years in a level No. 4 charred barrel, in Tullahoma, Tenn. Those intense roasted spice and charcoal flavors are capable of standing up to any number of sweating cheese, or chile and cream cheese dip on the hors d’oeuvres table. Around $50.

If you’re looking for something with a nice, strong bite to sip throughout the meal, this is the stuff. It’s made at the Barton 1792 Distillery, the oldest fully operating distillery in Bardstown, Ky. That first sip hits hard with spice, then eventually dissipates into a silky honey with a dash of vanilla. Just think of those couple fingers of bourbon in your glass as a warm, comforting hug at the end of dinner. Will this lull you into a much-deserved nap on the couch? Maybe so. Around $30.

The Rebel Yell family of bourbon, made in Louisville, Ky., includes flavored whiskey (one is root beer-flavored) and some small batch rye. But the original Kentucky straight bourbon is what you’ll need. Have you ever tried honey butter with warm biscuits? This is that sensation, in bourbon form. That flavor lingers in your mouth along with traces of sweet stone fruits, giving it a long, smooth finish. It’s good with your grandmother’s green bean casserole. It’s good with those twice-baked, overstuffed potatoes. It’s even good with canned cranberry sauce. Around $16.