Trump’s Cabinet picks at odds with his campaign messages 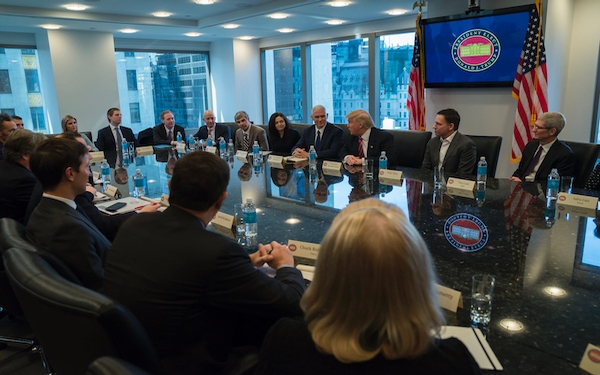 Donald Trump promotes himself as a man divorced from party ideology, a president-elect just as open-minded to input from Al Gore as from Newt Gingrich.

But with his Cabinet picks nearly complete, he has chosen one of the most consistently conservative domestic policy teams in modern history, setting himself up for hard decisions and potential conflict with some of his supporters when he begins to govern.

The internal conflicts have emerged with nearly every pick.

Trump campaigned against the big banks, then chose a former Goldman Sachs partner, Steven Mnuchin, to run his Treasury Department. He pledged to save Medicare and Social Security, then chose Rep. Tom Price, R-Ga., who has advocated sweeping revisions in Medicare and Medicaid, to run Health and Human Services.

Trump has placed the burdens of working people at the top of his agenda, yet chose as Labor secretary an executive, Andrew Puzder, who talked in an interview about the advantages of replacing human workers with machines because they are “always polite, they always upsell, they never take a vacation, they never show up late, there’s never a slip-and-fall, or an age, sex, or race discrimination case.”

And even as Trump aides put out word that the president-elect’s daughter Ivanka would be an influential administration voice in favor of curbing global warming, Trump named a man who has repeatedly expressed skepticism about the scientific consensus on climate change, Oklahoma Attorney General Scott Pruitt, to lead the Environmental Protection Agency.

“This is a big mystery to a lot of people, and it’s going to be one of the hardest things about this presidency,” said Elaine Kamarck, a former adviser in the Clinton administration now at the Brookings Institution in Washington, who has written extensively about the inner workings of White Houses.

Trump has so far shown a deftness at drawing attention away from sticky policy debates with bold, attention-grabbing strokes, a tactic that may help him deflect controversies when he moves to the Oval Office. On Monday, he announced he was delaying until next month a news conference at which he had promised to address his business conflicts of interest, then on Tuesday morning, he staged a photo opportunity at Trump Tower with entertainer Kanye West.

He defied some ideologues in his party, and won goodwill from many supporters, by dramatically persuading Carrier Corp. to keep some of the air conditioning company’s manufacturing jobs in Indiana rather than ship them to Mexico.

Despite criticism over singling out an individual company with tax incentives and implicit threats to its government contracting business, Trump was able to use the publicity over the deal to promote a message that workers, particularly those in manufacturing, were at the top of his agenda.

“We are going to see a lot of symbolic politics,” said Lara Brown, a professor of political management at George Washington University. She expects gestures like the Carrier deal to prove effective for some time.

Trump’s supporters, Brown said, are more invested in shaking up the system than a particular policy agenda.

But the splashy moves could wear thin if Trump fails to deliver on signature promises, like a jobs boom.

“People will give him the benefit of the doubt for a while, but if things have not become different for them by this time next year, they are going to get restless,” she said.

Trump has sent conflicting signals about how much direct control he will exert over federal agencies.

Transition officials say Trump will be calling all the shots and giving clear direction.

Yet Trump has never demonstrated a sustained interest in policy details. By contrast, at least some of his presumed appointees would take office with detailed agendas they have honed for years as well as ties to lawmakers who know the workings of the federal government in much more detail than the president-elect.

Just 4 in 10 Americans polled, fewer than for any president-elect since Pew began asking the question during the 1989 transition, said they approved of the job Trump has done explaining his plans and policies.

Trump’s Cabinet picks also won approval from only 4 in 10 Americans, another low for a president-elect during the transition.

Kamarck said Cabinet secretaries normally seek guidance on day-to-day decisions by looking to presidents’ prior government actions and their campaign policy papers — two things Trump lacks. In the absence of clear guidance, they may interpret their selection as a mandate to pursue their own agendas. That could lead to conflict if those policies prove unpopular or at odds with Trump’s desires.

She pointed to failures in two Democratic administrations — President Bill Clinton’s effort to allow gays to serve openly in the military and President Barack Obama’s desire to close the military prison at Guantanamo Bay — as examples of the difficulties that can ensue when presidents have public disagreements with the people in charge of implementing their policy goals.

“You can see it coming,” Kamarck said, pointing to the difficulty of delivering on some of Trump’s promises.

“What happens when the new secretary of (the Department of Homeland Security) discovers that it’s pretty hard to deport 3 million criminals without deporting people who had parking tickets?” she said.

Most every president has the same rule for Cabinet secretaries: Don’t surprise.

If one of their decisions make news, then someone in the White House, perhaps the president himself, needs to sign off on it ahead of time. But within that parameter, administrations give leeway, some more than others, to agency heads.

Obama is known to run a particularly centralized operation, for example, which has frustrated some Cabinet secretaries who have felt that White House control slowed the pace of action and got in the way of putting new policies forward.

Christine Todd Whitman, the former New Jersey governor who led the Environmental Protection Agency under President George W. Bush, said all administrations want to retain control of strategy, though they will let Cabinet secretaries make their cases for how best to execute it.

“The secretary’s job is to tell them whether they’re crazy or not, and if they say they don’t care, you salute and go ahead,” said Whitman, who ultimately resigned as EPA chief because of a dispute with the White House over how the agency would enforce the Clean Air Act.

Whitman said Trump would be no different in that respect. The conservatives serving as his closest advisers inside the White House say as much about his agenda as his Cabinet choices, she added.

Presidents also differ on how willing they are to back up subordinates who cause political headaches.

Bush was known for his loyalty to his appointees. In one celebrated case, he praised Michael Brown, then the administrator of the Federal Emergency Management Agency, who was being criticized for the government’s response to Hurricane Katrina.

Trump could be different. “He’s going to be quite unpredictable, but I do think he wants to make sure that all the policy is his,” said Whitman, a Republican who voted for Hillary Clinton.

“He likes to say, ‘You’re fired.’ He’s going to pull the plug pretty fast” on officials whose actions cause problems, she predicted.

Trump has given mixed signals about how long a leash his aides have. A top political adviser, Kellyanne Conway, publicly criticized Trump’s decision to consider Mitt Romney as his secretary of state and paid no apparent price. That led to speculation about whether her criticism of Romney, who ultimately did not get the job, had been part of a more elaborate plan by the president-elect.

Yet Trump seems to relish calling fellow Republicans out for perceived incompetence or disrespect. He has also said at times that members of his inner circle, including Vice President-elect Mike Pence, do not speak on his behalf.

“Maybe a President Trump doesn’t say, ‘Heck of a job, Brownie,’” said Tevi Troy, a former Bush administration official and author of the book “Shall We Wake the President? Two Centuries of Disaster Management from the Oval Office.”

“Maybe a President Trump tweets out: Mike Brown, falling down on the job.”