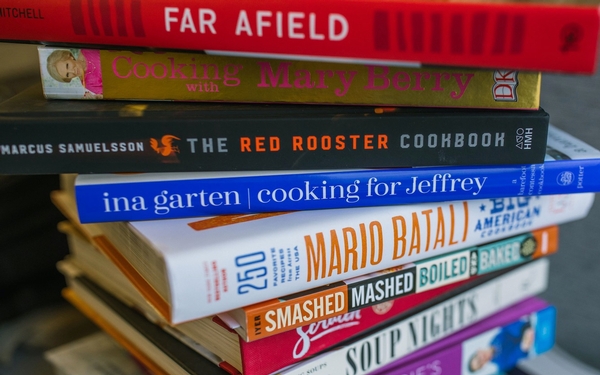 “Dorie’s Cookies” by Dorie Greenspan (Houghton Mifflin Harcourt; $35): The reigning cookie queen says, “Cookies and I have been pals forever.” Of course they have, considering that over the years she has created more than 300 recipes such as Blueberry-Buttermilk Pie Bars, Pecan-Butterscotch Shortbreads and Mulled Wine Jammers. But she has never written about them until now. We get insights into how Triscuity Bites came to be, why the sandy French Vanilla Sables are no ordinary cookies and how to make Almond Crackle Cookies with just three ingredients. There also are recipes for Do-Almost-Anything vanilla and chocolate cookie doughs, candied orange peel and icings. The book is a godsend for cookie monsters of all types.

Worthy tip: Cold dough is tough to roll, and waiting for it to reach the perfect temperature can be a hit-and-miss affair. So roll dough as soon as it is made, when it is soft and submissive, and give it the big chill after it’s rolled out.

“Big American Cookbook” by Mario Batali (Grand Central Publishing; $40): Crisscross the country in the eight chapters, which are divided by regions that share geography and cooking styles, and sample a diverse culinary scene: Baked stuffed clams, aka stuffies in New England; bourbon-peach jam and chipped beef pecan dip from the deep South; Concord grape pie from the Finger Lakes; Swedish meatballs from the upper Midwest; Kentucky’s gooey Woodford pudding packed with blackberries; New Orleans’ oysters Rockefeller; Ozark pudding; Navajo Frybread tacos; Alaskan grilled halibut; Hawaii ahi poke; Cajun white sausage; and barbecues from across the country. Mr. Batali says the recipes are not trendy or even current in some cases, but speak of the places they are served. And that’s OK because they whet your appetite to cook, eat and travel.

Worthy tip: An authentic Key lime pie is pale yellow in color, and not green — that’s for the tourists.

“The Vegetable Butcher” by Cara Mangini (Workman; $29.95): Gift this book to a vegetarian, and you’ll become the person’s BFF. Ms. Mangini, who comes from a long line of butchers and is the chef and owner of Little Eater in Columbus, Ohio, artfully uses her butchery skills to slice and dice vegetables. She not only gives tips on how to select and care for knives but also shows how to cut vegetables into coins, oblong slices and matchsticks in step-by-step photos. She demystifies vegetables by showing how to select, prep and cook them. Brussels sprouts are shredded by cutting them crosswise into very thin slices for a slaw-like salad and topped with pomegranate seeds, walnuts and manchego cheese. Kabocha squash is peeled, diced and cooked in a ginger-coconut curry along with adzuki beans. Even vegetable devotees who profess to know-it-all will learn something from this butcher.

Recipe to try: Swiss chard crostata is with a fennel seed crust.

Worthy tip: Remove the garlic smell from your fingers by rinsing them with water and then rubbing them against any stainless-steel surface, such as the back of your knife.

“Soup Nights: Satisfying Soups and Sides for Delicious Meals All Year” by Betty Rosbottom (Rizzoli; $35): Ms. Rosbottom makes no apology for coming out with the umpteenth soup book in the cookbook world because she writes, “soups never go out of style.” She also offers us a good reason why we could have soups 24/?7. Chapters are divided into vegetable-driven, beans and grains, fish-centric, hearty and chilled categories, and familiar flavors get fashionable accessories. Red Pepper Veloute is garnished with fresh crab salad; roasted butternut squash soup gets a boost from a swirl of sage creme fraiche; and watermelon is pureed with mint and lemon juice and served with a scoop of whipped feta. There also are recipes for soup’s natural partners — salads, sandwiches and simple desserts. Frisee salad with walnuts, pears and goat cheese dressing; lobster BLT; and Three-Layer Chocolate Caramel Bars anyone?

Recipe to try: Winter Tomato & Garlic Soup, which gets a citrus hit from grated orange zest, is served with gorgonzola bruschette.

Worthy tip: When using frozen corn, saute in olive oil until lightly browned before adding to the soup. This will bring out the sweetness of the corn.

“Smashed, Mashed, Boiled and Baked — And Fried, Too!” by Raghavan Iyer (Workman Publishing; $16.95): The book’s a treat for any spud nut, who likes potato cakes spiked with mustard seeds and curry leaves; Indonesian-style chicken soup with fingerling potatoes and galangal; skillet potato salad with basil; Moroccan potato stew with saffron biscuits; potato gratin with vanilla caramelized onions or rosemary; hasselback potatoes with cardamom butter; and chocolate sweet potato pound cake. Mr. Iyer accompanies each recipe with a tater tip, which range from gadgets used, to substitutions, to origins of ingredients.

Worthy tip: To keep peeled potatoes from discoloring, drop them in a bowl of water.

“Far Afield: Rare Food Encounters From Around the World” by Shane Mitchell (Ten Speed Press; $40): From the Rabari cattle herders in northwestern India, to the fishermen on the Swahili coast in Kenya, to the taro farmers in Hawaii, Ms. Mitchell captures the souls of the people with her prose and shares recipes that keep their traditions alive. We learn that Rabari women season raw mango chutney with mustard, fenugreek and fennel seeds and perfume it with cardamom and saffron; Swahilis amp the heat in a red snapper curry by adding the piri piri chili; and there’s nothing more aloha for breakfast than a fried rice omelet made with linguica sausage and hamakua mushrooms. James Fisher’s stunning photographs makes this book a wonderous addition to any coffee table.

Recipe to try: Bhindi Masala (spiced okra) from the state of Rajasthan, India, uses spice blends such as garam masala and chaat masala.

Worthy tip: When making a mullah, a classic Sudanese meat stew, use dried okra or peanut butter as a thickener.

“Simple: Effortless Food, Big Flavors” by Diana Henry (Mitchell Beazley; $32.99): No-muss, no-fuss is Ms. Henry’s motto in her 10th cookbook. She shares easy-to-make dishes that explode with big flavors by using ingredients that are in one’s kitchen cabinet or refrigerator. She readily admits that she stole the idea from a New York chef for her roasted carrot salad with cumin and coriander seeds, drizzled with a pomegranate molasses and Dijon mustard dressing. And she’s candid about using canned chickpeas in a lamb and bulgur pilaf that is studded with halved figs, walnuts and preserved lemons. For a no-hassle dessert, she whips up a raspberry-chocolate sundae by layering vanilla ice cream, brownies, raspberries and raspberry sauce.

Recipe to try: Parmesan Roast Chicken with cauliflower and thyme.

“Scratch” by Maria Rodale (Rodale; $35): If you want the rookie cook in your life to start cooking the right way, from scratch, “Scratch” is the answer. Ms. Rodale says her book is “not about counting calories or reducing your sugar or fat intake or fads” but it is about real food and using products that don’t have a list of fake ingredients. Her father was a leader in the organic farming movement and her mother’s side of the family is Pennsylvania Dutch, and her recipes give a nod to her late parents with chicken-fried steak made with organic steak, spaghetti sauce with a dash of maple syrup, Pennsylvania Dutch-style creamed chipped beef and dandelion salad with hot bacon dressing.

Worthy tip: Use the crumb coat technique when frosting cakes. First spread a thin coat of frosting to hold the crumbs in place. Then refrigerate the cake for half an hour to set a little. Use remaining icing to finish frosting the cake.

“How to Bake Everything” by Mark Bittman (Houghton Mifflin Harcourt; $35): The book will be treasured by wannabes and seasoned bakers as it is chock-full of information. It explains the various flours, sugars, salts and fats; how to prepare fruits and vegetables; vegan substitutions; recipe variations; and baking equipments. The book doesn’t have colorful photographs of Lemon Thins, Fruitcake Bars, Pistachio Macarons or Chocolate-Coconut Tart but instead is sprinkled with clear black-and-white illustrations and infographics.

Recipe to try: Pecan pie made without corn syrup.

Worthy tip: For fudgy brownies, add an egg yolk along with the whole eggs, and for chewy brownies, substitute brown sugar for half the white sugar.

“Cooking With Mary Berry” by Mary Berry (DK; $25; hardcover): The Brit grande dame judge of reality TV cooking shows says her cooking is about tasting good, looking good and being practical to make. And the cookbook reflects her no-fuss and practical personality with chicken crepes Florentine, Hungarian goulash, mushroom stroganoff and tiramisu; offers variations (use broken spaghetti instead of arborio); features step-by-step illustrations for cooking eggs, roasting meats and shaping croissants; and provides “cook’s know-how” tips such as explaining where tapenade comes from (Provence, France).

Recipe to try: Lemon cheesecake on a gingersnap crust topped with berries.

Worthy tip: When cooking mushrooms, increase the heat to reduce and thicken the sauce.