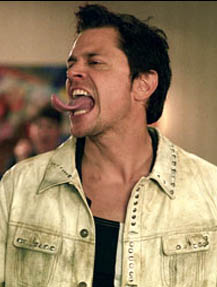 “A movie like this might excite [protests] in parts of the country, but my values are intact. I love this movie,” says Johnny Knoxville, about the public reaction to his latest film, A Dirty Shame. “I’m not very prudish, really. I don’t know if you’ve seen any of my earlier work,” he says with a laugh.

John Waters, the film’s director, has been raising eyebrows since the late 1960s with films like Mondo Trasho, Multiple Maniacs and Pecker. A Dirty Shame, which also stars Tracey Ullman, Selma Blair and Chris Isaak, continues in the spirit of its predecessors and breaks new ground. It’s the first of the director’s movies to get an NC-17 rating, and Knoxville couldn’t be happier with the outcome.

“To be in a John Waters film that’s NC-17, I mean, you hope for a naughty John Waters film – and to get to be in it is even better,” he says. “I don’t think that two years ago it would’ve received an NC-17 rating; it’s a way too conservative time in America right now,” he says emphatically.

Suffice to say, Knoxville is a dyed-in-the-wool fan of Waters’ previous projects but it’s difficult for him to pick one specific favorite. “Well, obviously, I love A Dirty Shame,” he says, smiling proudly. “Pink Flamingoes, Hairspray – I love all his films. It’s like trying to pick your favorite Clash song.”

In A Dirty Shame, Johnny plays Ray Ray, a charismatic tow truck operator on a mission to sexually liberate a small congregation of mildly concussed deviants who all reside in the straight-laced suburbs of Baltimore. As Knoxville recalls, it was a role he was born to play.

“John Waters called us ‘sexual anarchists’ [on the set]. I’m pretty inclusive of everybody [and their sexual orientation] and so is John – and so is the movie!” Knoxville points out. “Ray Ray’s a sexual healer and he’s [also] inclusive of everything as long as it doesn’t hurt anyone else.”

That said, it’s not lost on Knoxville that A Dirty Shame will be considered just that in certain regions of the U.S. However, it’s not like the actor and former “Jackass” star hasn’t been down the road of controversy before.

“You can’t say that it’s the [reaction to the] Super Bowl; that’s a cop-out,” Knoxville says pointedly. “It’s just that it’s a conservative time in America and a lot of people like to point a finger at the Super Bowl, but come on. It wasn’t the Super Bowl. It was just the past few years – it’s gotten worse and worse. I mean, ‘Jackass’ couldn’t even be on TV nowadays. In America, sex is really taboo.

“There’s going to be some people not so happy,” Knoxville adds matter-of-factly. “But then there’s going to be a lot of ‘Jackass’ fans and John Waters fans who are going to be jumping up and down. A lot of people weren’t very happy about ‘Jackass’ in the same parts of the country,” he reflects.

Moving on to bigger projects (and larger stunt budgets) provides a physically safer work milieu for the former daredevil. When asked if he’s harbored any regrets or major scars from his TV show, Knoxville ponders for a second, leans back and smiles.

“I’m proud of ‘Jackass’ and I don’t have to live that down at all. Most of my injuries were concussions and whatnot. Maybe I don’t retain information as well as I used to,” he says with a chuckle. “People ask about the golf cart and the Butterbean thing a lot – anything where there was eminent doom, people really respond to and like,” then adds, “even me.”